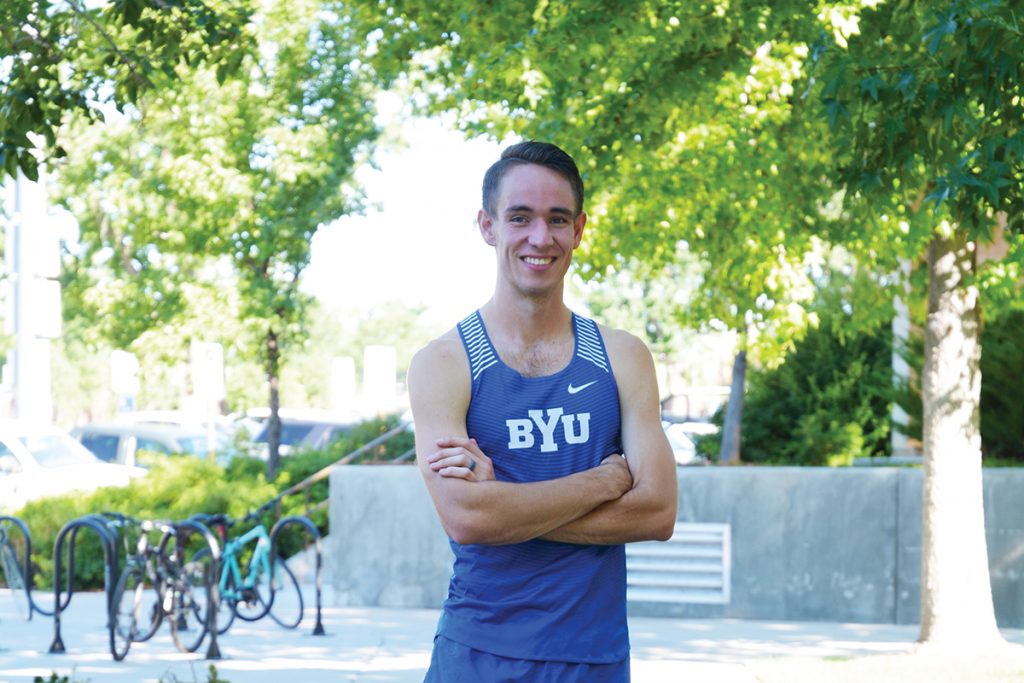 Jacob Heslington’s first running adventures weren’t on the track or the cross country course. They were on his makeshift steeplechase course on the family farm by Utah Lake.

“I would hurdle hay bales and time myself,” Jacob says.

Now, Jacob is a senior on the BYU cross country team and one of the leaders on a squad that finished second in the nation last year and should be in the hunt for a national championship this year.

“We lost big names from last year, but we have a lot of depth and other runners are stepping up,” Jacob says.

Jacob first learned this lesson in high school. As a freshman, he was the No. 8 runner all season behind seven seniors (cross country teams enter seven runners in meets). The situation left him a team leader as a sophomore, without even a taste of varsity racing experience.

“I cut 35 seconds in my mile time from my freshman to my sophomore year,” he says. “I knew I needed to improve to help my team.”

He won the 4A state cross country championship for Timpanogos High in Orem as a junior and a senior, and then committed to BYU.

“I knew I wanted to go into mechanical engineering, so that narrowed it to Utah State and BYU,” he says. “With the runners BYU had, I thought we had a chance to win the national championship.”

But, just after returning from his church mission to Guatemala, Jacob had another setback that could have cost him his life, let alone his running career.

“About six months after I got home, I started having a hard time breathing,” he says. “I was in pain and thought it might be cracked ribs from sledding a few days before.”

His right leg swelled, leaving it rock hard. A trip to Utah Valley Hospital confirmed that Jacob had blood clots.

“Several of the doctors said I was lucky to be alive and I may never run competitively again,” he says. “That was hard to hear, but I grew mentally and spiritually during that time.”

Eventually, with the encouragement of coach Ed Eyestone, Jacob did run competitively again and ran his first race for BYU in March 2017, about 18 months after the blood clots.

The medical scare was just another hurdle for Jacob to overcome.

A favorite hangout “I’m a very outdoorsy person. I love what nature has to offer. I love hiking up Provo Canyon. I also love boating and love being on Strawberry or Deer Creek. Oh, and of course I love Mount Timpanogos.”

Why BYU? “I knew I wanted to go into mechanical engineering, so that really narrowed it down to Utah State and BYU. With the runners BYU had on the team and coming in, I thought we had a chance to win the national championship.”