Parachut Named No. 6 Startup to Watch 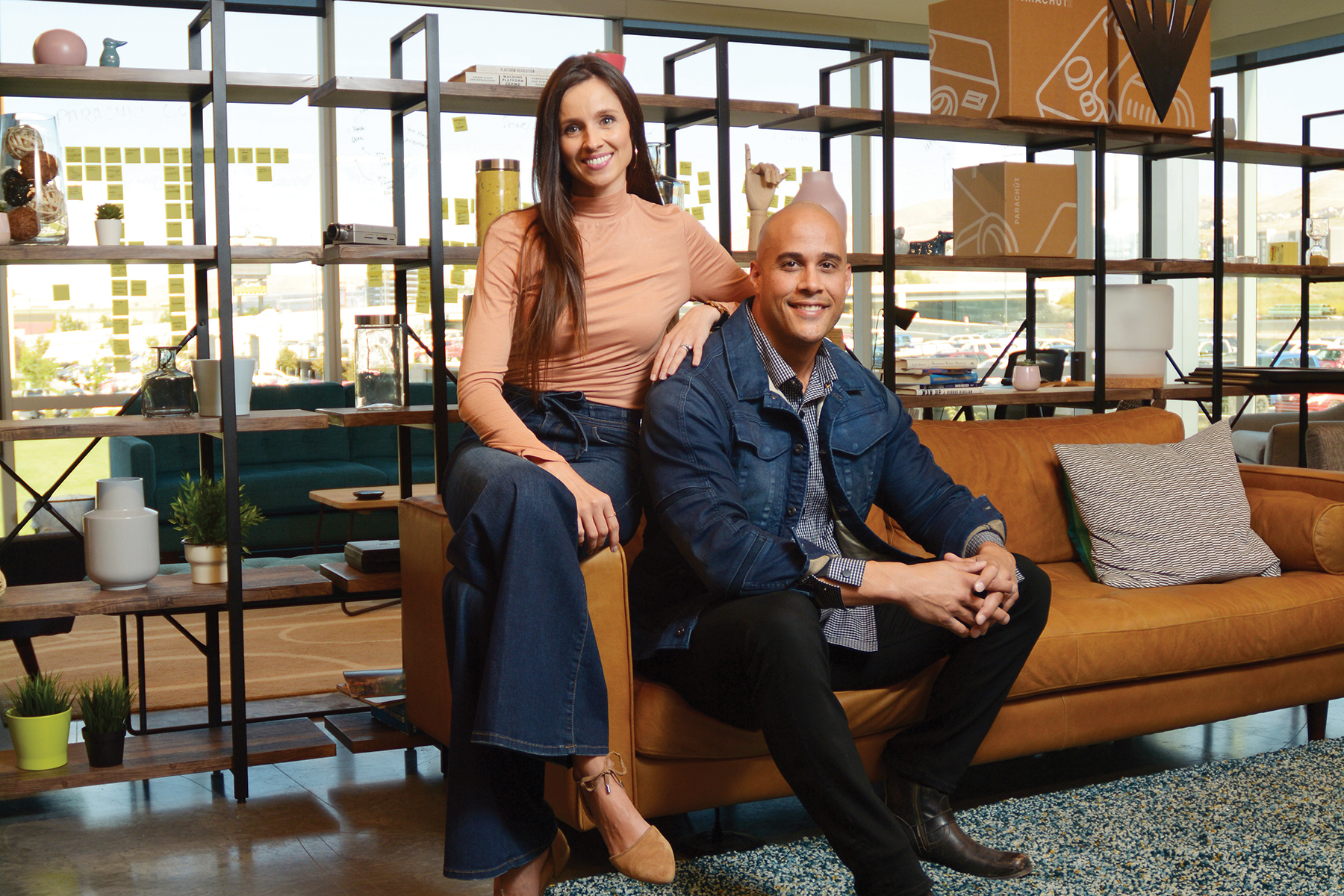 Parachut’s Lehi office is located in the Kiln office space (a fellow Startup to Watch in this year’s UV50). The company has 10 employees — but it’s important to Philip and Melissa that they are not referred to as such. “We don’t call anyone an employee,” he says. “They are team members with unique and critical skills. And it’s a privilege to work with them every day.”

Melissa and Philip Niu met on a blind date — but their life together has had nothing but vision. They are the founders of Parachut, a camera equipment service that offers members all the gear they want for as long as they want it. There are no late fees. No long-term contracts. No ownership responsibilities. Just access — pure and simple. This millennial mindset has served the company well, and will continue to do so as they lead the way for responsible consumerism. Parachut has been called “the Netflix of camera gear,” “the Airbnb of creative tech,” and “the Amazon of the access economy.” At BusinessQ, we call them watch-worthy. Here, Philip and Melissa give us a snapshot of startup sacrifice, their powerful partnership, and a brave new world market. #eyesontheprize

MELISSA: When we moved here to Utah, I stopped working to take care of our three girls and Philip went to work in marketing for a health company. But he wasn’t happy. He wasn’t himself. And he would come home and look at me and say, “There has got to be more to me than this.”

PHILIP: I was lost. And in that moment I told Melissa, “I need you to get off the bench. Will you start a business with me?” Now if you know me, you’d know that the idea of starting a business was the biggest cuss word on the planet. Growing up I watched my dad struggle as an entrepreneur and it was the most awful experience. I swore to myself I would never do it. But that’s how unfulfilled I felt. The greatest gift Melissa gave me was helping me overcome that fear of leaving a “comfortable” job. She said, “If this fails, it doesn’t matter. At least we tried.”

MELISSA: We both have backgrounds in marketing, and so we started to look at the trends of consumerism.

PHILIP: We weren’t interested in just starting a business. We were interested in changing the world. So we asked ourselves: What’s tomorrow’s big shift?

MELISSA: We thought of the millennial mindset, and how experiences matter to them so much more than things.

PHILIP: This generation doesn’t want to own things if they don’t have to. It’s a consumer universe. People want access to everything, but they don’t want to deal with the responsibilities of ownership or the hassle of rental late fees.

MELISSA: And that’s the shift. It’s this circular economy — a $4.5 trillion market.

PHILIP: The next step was figuring out which industry to tackle.

MELISSA: I had gotten really interested in photography after we had kids. It was a visual world that lent itself to that “experience mindset.” It seemed like a natural place to start.

PHILIP: So we had a family council, and we sat our three girls down in the garden of our beautiful Bountiful home — where we thought we’d be forever — and told them about our plans. “We need to sell our home and downsize our belongings,” we said. “This is what it’s going to take.” It’s important to teach our children that if you want to progress, sometimes you need to sacrifice.

MELISSA: Involving our girls in the entrepreneurial journey has taught them so much about courage. They’ve seen us at our lowest of lows and highest of highs. They understand terms like equity and profit/loss. They were our first warehouse team. And they watched us move into a townhome with terrible green carpet. Our girls pray for Parachut each night. They want this to be successful right along with us.

PHILIP: Parachut’s tagline is “Own nothing. Have everything.” Our clients have extreme freedom to check out whatever photography gear they want, when they want, and for however long they want it. There are no return dates or late fees — just a monthly subscription. And what makes it so disruptive in the camera vertical, is that this typically saves the consumer money and gives them access to products they wouldn’t normally purchase on their own.

MELISSA: There are so many retailers getting hit with massive returns in today’s market. And manufacturers are paying dearly. What’s more, people simply cannot own as many things anymore because of storage issues. There are more storage units in America than there are Starbucks and McDonald’s locations combined. That’s crazy. We’re hoarding our waste — and our opportunities. One of our biggest goals is to help foster a more responsible consumer. People always ask me, “How’s the camera business going?” But this isn’t a camera business. It’s so much more than that.

PHILIP: Our goal is to eventually tackle every retail channel that could benefit from a circular economy. We’re building this software from the ground up, we’re gaining steam, raising money, and moving forward. Cameras are only the beginning.

MELISSA: We’re marketing Parachut to become a noun and a verb. Someday in the future, someone will say, “Why did you buy that? You should have just Parachuted it.”

PHILIP: Working together is a dream. We are stronger together than we are apart. We deeply respect each other. We both recently lost our dads. One was a former Idaho Supreme Court Justice and the other a countryman from Tonga. When you see these giants of men pass away and take nothing with them, it’s a gentle reminder that the most important commodity we have is people. What matters most is not the money we made or the software we built, but the people we impacted. Business is just a good excuse to make the world a better place.

MELISSA: Why call it Parachut? Because before we started this company, Philip needed a lifeline. He was standing on the edge of a cliff, and he needed a parachute. So we made one. And we jumped together.

Getting Old and Staying Bold: The City of Orem Turns 100 Next post