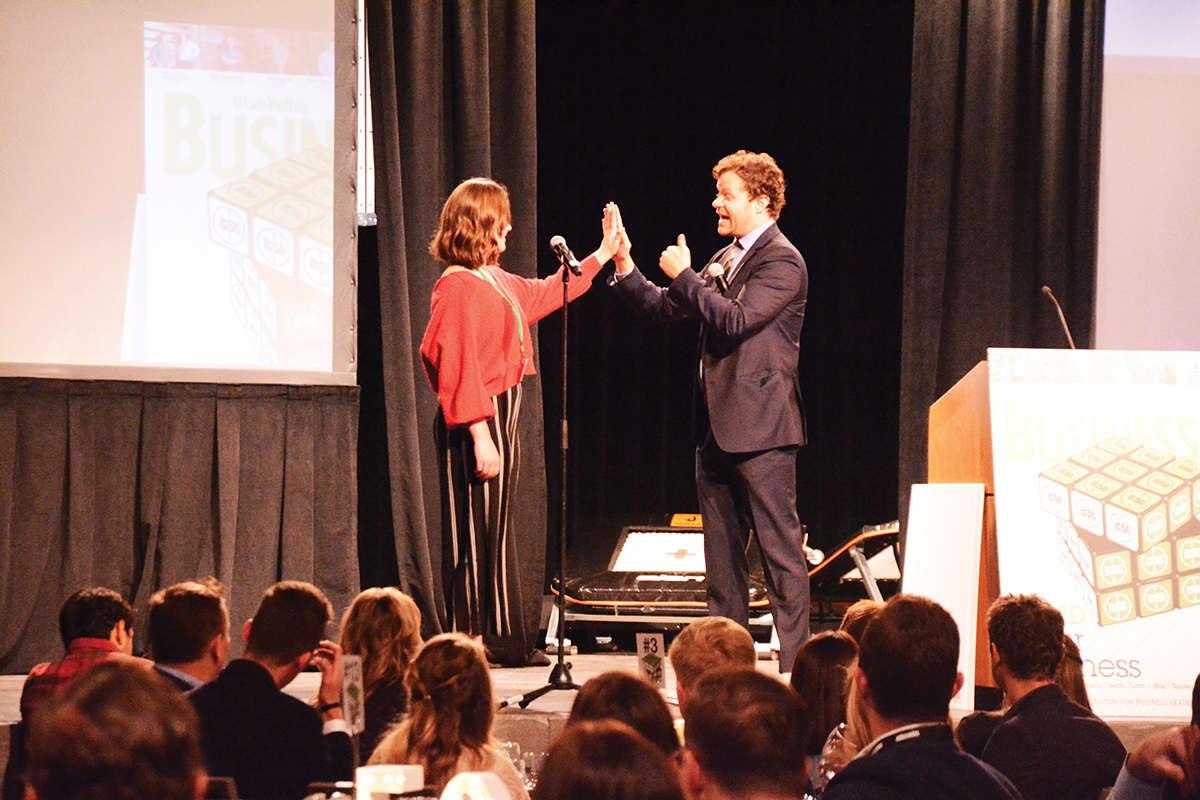 Bott shares his mentalist talents at events such as BusinessQ’s UV50 Gala, as well as entertaining at smaller parties and giving keynote speeches on empathy and connection. Learn more about Bott’s repertoire at SeanBott.com or (801) 520-8612.

To get his audience out of their heads, Sean Bott uses hypnosis, humor and good-natured trickery.

“We’re starving as humans,” he says. “Not for food, but for experiences that help us put aside common beliefs that we aren’t loved or lovable. The biggest evil we face in this world is shame. When I bring moments of awe and wonder, it snaps people out of their shame, and it’s incredibly healthy.”

Bott set the stage and stole the show at the 2018 UV50 Gala, clicking with the theme of “Mind Your Business.” But he didn’t mind his own business and guessed intimate details about audience members, such as their dream vacation destination. His ability to shock and awe created mic-dropping moments throughout the evening.

“I’ll come in contact with people several years later after a show, and I’ll see them glow as they excitedly tell me about the moments from our time together,” he says. “I get asked for a lot of autographs. I’m not a celebrity, but they want my signature because they are trying to anchor that moment in time.”

Back by popular demand and a lot of laughter, Bott returned to the UV50 Gala stage for 2019 to leave jaws dropping once again.

His audience craves connection and surprise, and Bott craves the gasp and wide eyes. It’s the look he’d receive from a child if he dressed up as Santa Claus on December 24 — except it’s from a grownup.

Bott always loved magic and started studying hypnosis at a young age. By age 12 he could hypnotize adults. He trained at The Second City Comedy in Chicago and has since spent time filling his mind with therapeutic modalities, comedy and fringe areas of psychology.

Bott graduated from the University of Utah in 2008 with a communications degree and started a job as a court clerk. The desk job didn’t satisfy his comedic, mischievous, wheels-always-turning mind. So he changed his own storyline and began reaching out to agents and potential clients. Within a few years, he was performing and working 100 hours a week.

“I work really hard to get people to freak out,” he laughs. “There isn’t a day that goes by that I’m not polishing something or studying something new I can bring to my audiences.”

Out of This World

Sean Bott would rather fill his life with wonder and amazement rather than boring certainty. This mature way of thinking started at a young age, spurred partly by his family’s move to Saudi Arabia. Bott quickly became aware that life is not a one-size-fits-all experience.

“My dad thought it would be a good idea to bring five kids from Utah to the desert where he taught dentistry at a university,” Bott laughs. “It was a unique experience to embrace the fact that there were a lot of different people who live a lot of different ways. I got used to the 116-degree heat, but I grew a lifelong hatred of cockroaches.”

Utah Valley Must-Do Events For November and December Next post