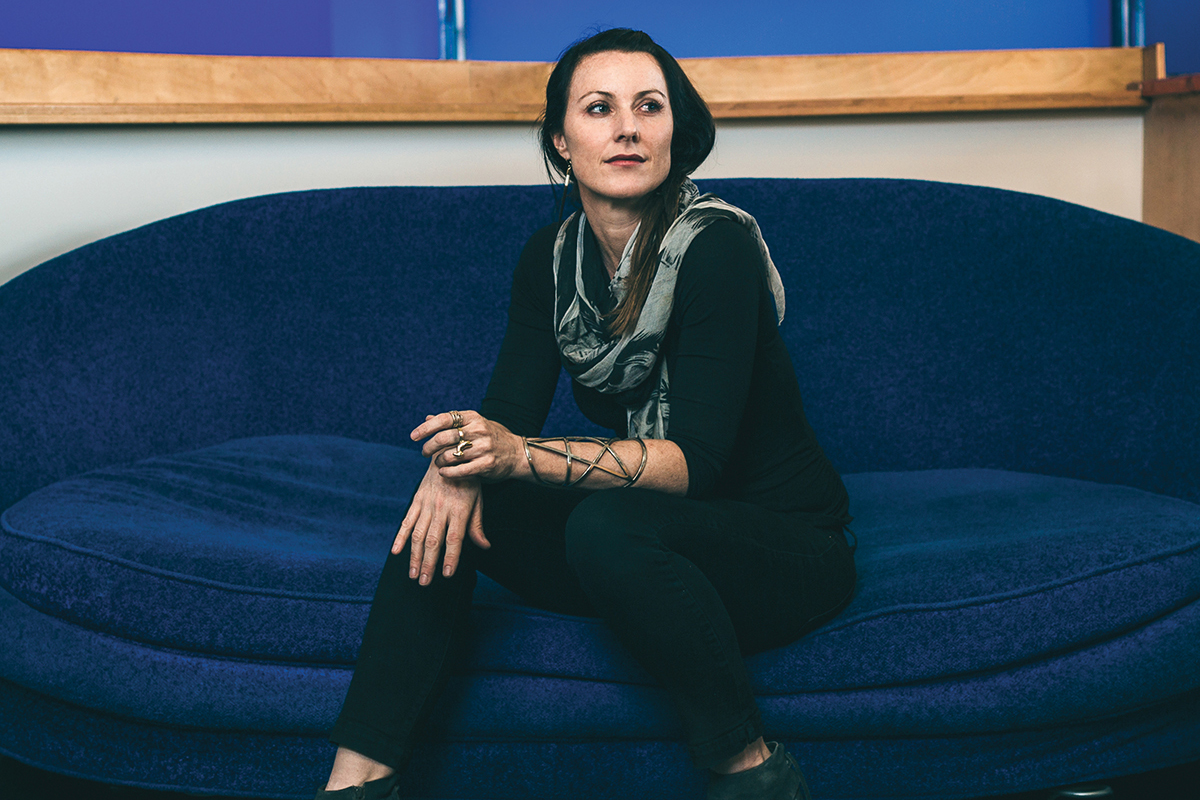 New York-based Jen Lewin first had the idea of interactive light during a camping trip in Australia when seeing the moon reflect in tidepools. This holiday season, that inspiration is coming to Utah as part of Thanksgiving Point’s Luminaria. Photo By Chip Kalback.

Jen Lewin, artist and owner of Jen Lewin Studio in Brooklyn, New York, was camping in Western Australia when she and some friends discovered a magical moonlight reflection. The receding tide had left dozens of small pools of water that reflected in the moonlight and looked like tiny dots of light in the otherwise dark landscape.

“We ran around and played in the pools and had a wonderful experience together,” Jen says. “It inspired me and I began working on an interactive art piece that would give people a similar experience.”

Jen’s first iteration — which took more than a decade to fully materialize from its initial inspiration Down Under — was The Pool. It combined her artist’s eye and her programmer’s mind into an interactive field of LED magic that traveled the world inspiring socializing and connection.

“After years of traveling with The Pool, I started to look at light and other things we could do,” Jen says. “I was drawn to the idea of creating interactive pathways of light — each designed for a specific space. That was the inspiration for Aqueous.”

Aqueous is an interactive landscape of meandering pathways of light that will be a featured element of Thanksgiving Point’s Luminaria for 2019. The Luminaria version will be arranged into one of Jen’s favorite designs — the Flower of Life.

“We are always looking for spaces where people can experience art,” Jen says. “I’m interested in bringing large contemporary art experiences in public areas that might not expect to have them. It truly becomes public art. When Thanksgiving Point reached out to us, their event and location fit our goals as well. It’s a perfect partnership,”

The two groups have worked together closely for months to prepare the exhibit and ensure its success in Utah Valley. The installation is unique because it is meant for interaction. Children should run on it and parents should follow. The light changes as people use it. In fact, Jen looks at this human interaction as critical to the artistic experience.

“The moment of art comes when people interact with it,” she says. “It’s really about participation. It’s joy.”

Jen became interested in computer design as an elementary school student growing up in Hawaii. She began using early artistic programming applications that showed her how science, technology and art could fuse together in a delightful way. She was interested in numerous disciplines throughout her schooling and utilizes many of them in each of her pieces.

And none more than Aqueous.

“I wanted to create a global, interactive and traveling work that could evoke the evolution of symmetry and beauty seen in organic systems,” Jen says. “Every decision in the creation of this work, from its thousands of lines of internal code to its custom form generation, its custom wireless harnesses, custom hardware and even the customizable shipping crates, focus on making a work that can truly move and interact with the community throughout the world. These decisions are part of the core of the artwork itself.”

But beyond the light, the technology, the scope or the location, perhaps the most striking part of Aqueous are the smiles.

“One of the main parts of this experience, which I didn’t even understand while designing it, is the community aspect,” Jen says. “After the initial individual interaction with the light, people look up and smile. They look up and see other people sharing the same experience and smiling, too.”

In a world full of smartphones and laptops, Jen believes there is power in looking up.

“As creatures, we desire community and sometimes we forget that,” she says. “We’ve built these tools that, in theory, are supposed to connect us. The problem is that they are located in our phones and computers and they have us looking down and keeping to ourselves. As my work gets bigger, more people can participate at the same time. The community grows and the human connection intensifies.”

Have Art Will Travel

Jen Lewin’s work has been admired across the globe — by design.

The artist has a strong desire to make art that is interactive and portable. She wants to take her work to the people instead of requiring them to journey long distances to the art centers of the world.

It’s what she calls, “Have Art Will Travel.”

While she has permanent installations in areas from Colorado to South Korea, it’s the traveling exhibitions that show the greatness of her work. In 2017 alone, her art — including Aqueous, The Pool and Super Pool — was found in 11 different locations including Washington, D.C., Shanghai and Jerusalem.

And now, we will gladly add Lehi, Utah, to the list.