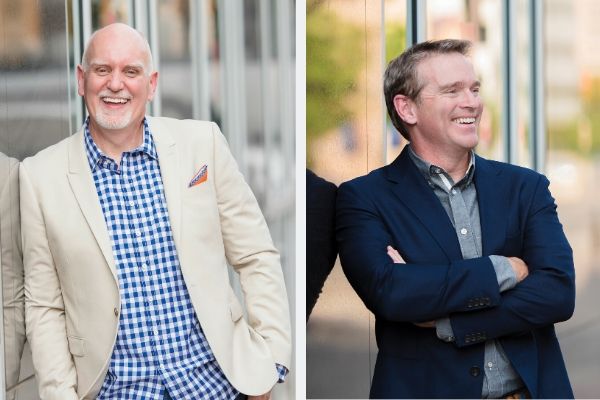 BYU grads Chester Elton and Adrian Gostick will release their 11th book in March, titled “Leading with Gratitude.” The duo speaks about 80 times per year, has sold 1.6 million books and had five titles land on the New York Times Best Sellers list. Their writings on leadership, culture and teams have been translated into 10 languages. Their company — CultureWorks — is headquartered in Pleasant Grove.

Elton: Around 2010, people were asking us, “What’s the next wave?” And we were hearing a lot about culture from the entrepreneurs and businesses we interviewed. If the culture isn’t right in the Provo office, then when you go into the company’s stores around the country, the culture won’t be right there either. But if a company has a great leader who is happy and who creates a culture of service and motivation, that carries throughout the brand. It’s like perfume in the air.

Gostick: If a culture isn’t right, the recognition doesn’t matter.

BusinessQ: Who is in charge of setting culture?

Gostick: It absolutely starts at the top. But the culture is also owned by everybody. That’s why you can’t ignore it or be passive about creating it and fixing it.

BusinessQ: How has your message changed over the years?

Gostick: There’s been a change in teams in the past 20 years. Companies have remote teammates. We have gig employees or contractors. The best team still wins, but the culture and action items associated with creating teams has changed.

BusinessQ: What do leaders crave hearing more — data or stories?

Elton: We’ve surveyed more than a million employees and then we share the data in multiple ways. Nobody remembers the numbers, but they always remember stories.

BusinessQ: In Utah Valley, many companies grow quickly, especially those featured in this issue of BusinessQ. How is culture impacted by growth?

Elton: Some companies grow without a heart, and they can do well for a short amount of time — but then they flame out. The companies that “get” culture are the ones who build something special.

BusinessQ: You travel the world teaching about culture. How do Utah companies compare to those outside the Beehive State?

Gostick: Unfortunately, companies outside of Utah are more willing to invest in their people. Even though our company is based in Pleasant Grove, we do 95 percent of our work outside the state. Utah has one of the lowest rates of educational funding per student, and perhaps that attitude carries over into the education and investment of teaching employees as well.

BusinessQ: How have the two of you created a culture of co-writing?

Elton: One of us will get an idea relating to culture and teams. Then we start to ideate, and we surround ourselves with great editors.

Gostick: Chester will find a lot of the interviews for us. It takes us around six months to research a book and six months to write, and then months of going back and forth.

BusinessQ: What is at the core of a company’s culture?

Gostick: Culture is driven by purpose. Being money-driven is a short-term purpose. Some entrepreneurs build their company to sell, or to get to the first round of funding. What is your purpose? That will be your culture.

BusinessQ: How can we know what motivates our teammates?

Gostick: We found 23 motivators — from ownership to creativity. Chester is driven by friendship, fun and service.

Elton: And Adrian is driven by solitude and family. When we were at OC Tanner, I wanted to honor Adrian for his hard work. We invited him to a gala where we would present him with an award. Well, Adrian hates big banquets. I had projected onto him a recognition tool that wasn’t a good fit for him.

Gostick: I wasn’t ungrateful. I still have the watch I was given that night. But it wasn’t as powerful of an experience as it could’ve been. Managers can’t manage everybody the same way.

BusinessQ: How does this play out for millennials?

Elton: Employees in their 40s, 50s and 60s often say they don’t need recognition. We’ve found it is 3X more important for millennials to be recognized. But it’s still in the way you express it. Millennials don’t want lapel pins. They don’t want to pick swag out of a catalog. They plan to change jobs in 2-3 years anyway. They prefer experiences over things. Good leaders know how to tailor motivation.

Lighten Up: Luminaria Has Brightened the Holidays Since 2016 Next post