Talking Christmas and the new Noorda Center with Stephen Pullen, UVU School of the Arts Dean 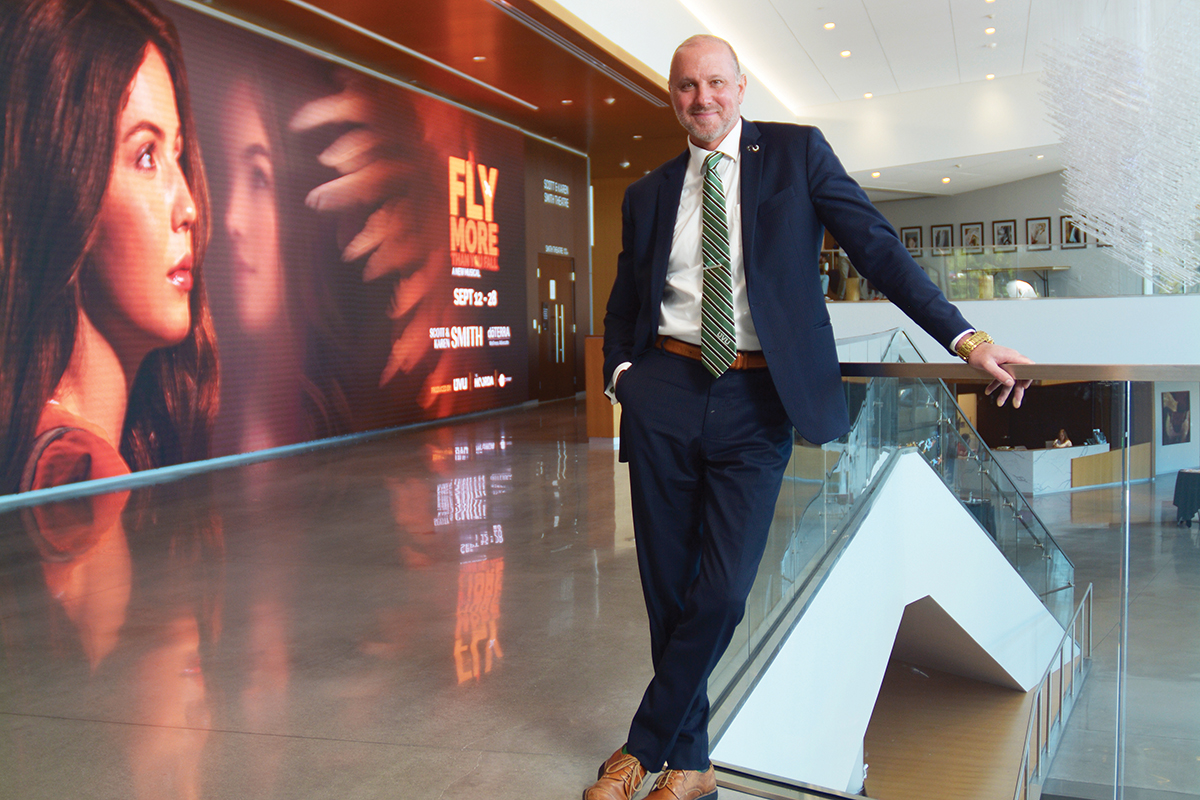 Before becoming dean of the School of Arts at UVU, Stephen Pullen worked as an associate professor and the chair of the Department of Communication and Theatre Arts at Old Dominion University in Virginia. He is also an accomplished screenwriter and producer.

If Christmas is the season of giving, then it’s always Christmastime at the UVU School of the Arts. From the dedication displayed by faculty and administration in giving students resources to compete in the cutthroat entertainment industry, to the generous financial gifts from the community to fund the new Noorda Center for the Performing Arts, gifts and giving are a theme at Orem’s evergreen university.

Green Christmas: Celebrating the color of giving, prosperity and the UVU School of the Arts

According to UVU School of the Arts Dean Stephen Pullen, an extraordinary arts program is comprised of three equally extraordinary elements: students, faculty and facilities.

When Stephen stepped into the role of dean in summer 2017, the program already had award-winning and nationally acclaimed faculty and talented students. And an astounding facility was already in the works — UVU broke ground for the new Noorda Center for the Performing Arts the year prior. Stephen’s job has been to continue the work of his predecessor K. Newell Dayley of facilitating a facility to foster student growth.

Just as the faculty of the School of the Arts works year-round to provide 1,700 students with the gift of experience and professional networks, the Noorda Center was made possible by financial gifts from local foundations such as Nu Skin, doTERRA and the Noorda family.

“These theater professionals have seen it all and have lots to compare to, and they’re saying our facilities are the best they’ve ever seen,” Stephen says. “The Noorda Center gave us not just state-of-the-art facilities, but I would argue the best facilities in the state of Utah — maybe even in the entire Northwest region. These facilities are truly spectacular.”

The Noorda is amid its 2019-2020 professional arts season with a star-studded lineup of talent such as Audra McDonald, Jeff McCarthy and Bernadette Peters. Because Christmas and the arts go so well together, Stephen especially wanted to pack the month of December with performances by Ashley Brown, Danú and the Depue Brothers.

“We’re going to really excite the people of Utah County, which is part of our objective but not our primary purpose,” Stephen says. “Our primary objective centers on creating events and experiences that will give UVU students a tangible, meaningful edge as they go out into this treacherous industry and compete.”

For example, during the debut of “Fly More Than You Fall,” UVU students worked on the production with the writers, producers, actors, and costume and set designers. Now the students who starred in the production can not only add the experience to their resumes, but can also leverage professional connections after graduation.

“That experience simply cannot be replicated in a classroom,” Stephen says. “There is no way for students to learn what they will learn on stage. Our students deserve to perform on Broadway, on television shows and movies in Los Angeles, and in the New York Philharmonic or Carnegie Hall. We are building bridges to those iconic places.”

For Stephen Pullen, both the color green and the season of Christmas represent the unity of a community.

As for the love of green, it goes deeper than the mascot’s sweatband.

“Green means go,” Stephen says. “Green means life. It means prosperity, right? All of that is wrapped up in one color. Especially on Wolverine Wednesday, you see just about every dean wearing a green tie and a lot of times green socks. You see our president with a green streak of hair. It’s not just for fun. It’s not just to say to the students, ‘Hey, we’re one of you.’ It’s a statement that says, ‘We believe profoundly in the mission of this university.’”

Originally published in the 2019 November/December issue of Utah Valley Magazine as “Green Christmas: Celebrating the color of giving, prosperity and the UVU School of the Arts”

4 Bright Ideas for Making Your Home the Merriest on the Block this Season with Gatehouse no.1 Next post