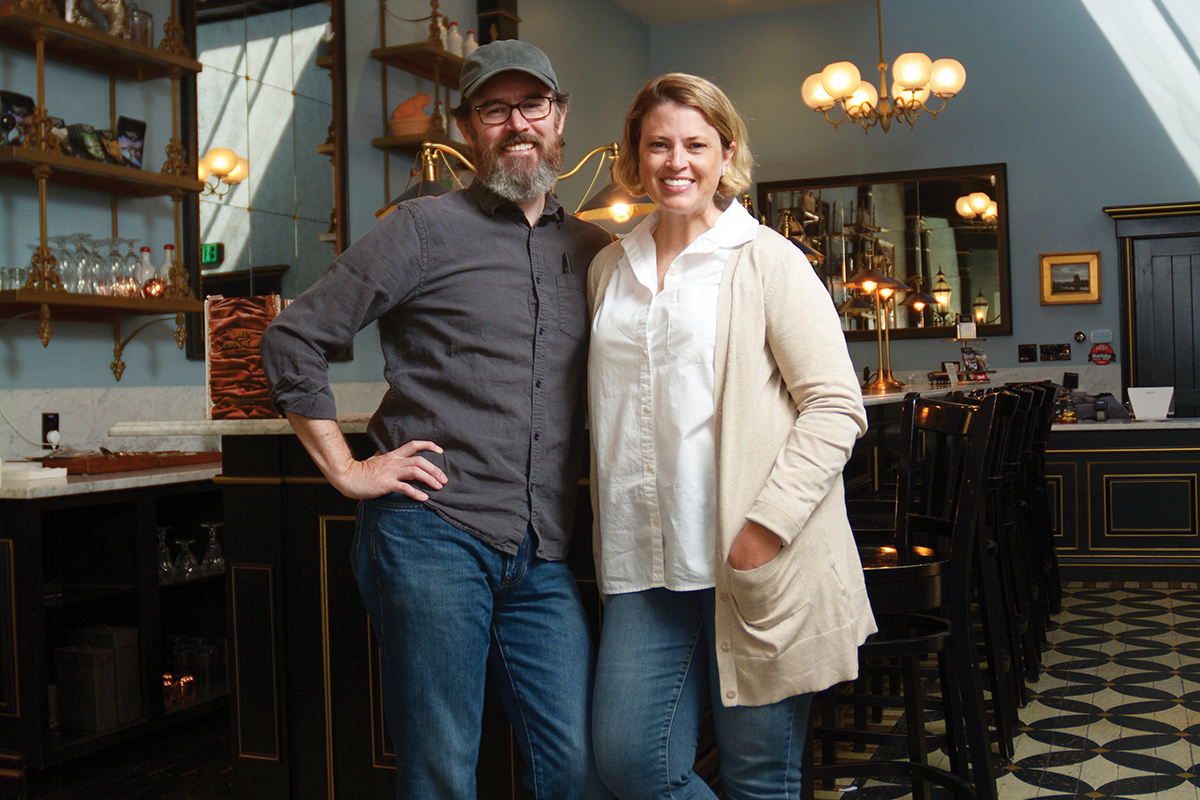 The Coleman clan is a family of artists, so most of the artwork on the walls at Taste are Morgan Coleman originals, with some pieces by his father, Michael Coleman, also appearing on the perimeter.

Food brings people together, but chocolate has a special ability to minimize differences and help people make friends — which is really what Christmas is all about.

“I don’t care how you lean politically or religiously. When you come and sit down over chocolate, everyone can find something they agree on,” Char Coleman says.

Char and Morgan Coleman own Taste in downtown Provo, a chocolate factory and food-tasting experience. In December, Taste transforms into a winter-flavored land of sweet and savory bites of the holidays.

The taste buds start watering at the sight of the storefront, which is designed by Morgan’s mom months in advance.

“This is very much still a family business,” Char says. “It’s everyone’s, and it’s a lot of fun.”

To put themselves in the holiday mood, Morgan and Char trek to Soldier Hollow in Midway by 4 a.m. on a winter morning to chop down two real Christmas trees — one for home and one for Taste. As an artistic family, they’re particular about illuminating the space with lights maximizing glitter and sparkle. They also bring in real garland and decorate with solid chocolate Santas made from antique molds.

“We bring our family tradition into the store,” Char says.

While Taste has become a tradition for locals, Char and Morgan maintain their own traditions — including spending Christmas with Morgan’s family. The Coleman celebration usually involves music, a Nativity pageant, and, of course, good food. While “taste” is important to this family, it’s not the only part of the holidays with magic.

“Whether it’s going up in the mountains with the family and the dog or hitting a particular funny drive-in on the way or just sharing a meal, it comes down to experiences,” Morgan says.

And that focus on experiences is what has led them on their entrepreneurial journey.

In 2004 Morgan and Char Coleman bought the building at 117 N. University Avenue that is now known as Taste. The location spent time as a printmaking business, an art gallery, a reception center and a marketing office until finally in 2014 the Colemans started transforming the space into a chocolate factory. While waiting for the equipment to arrive, they started hosting chocolate tastings and hired a designer. They then realized that the space had more potential than mass production of chocolate.

This past October, Taste celebrated its fifth anniversary as a chocolate factory and dining experience. They sell their own original brand of chocolate called Taste Artisan Chocolate, as well as other international brands of fine chocolate. By the end of the year, the factory will have produced 12 tons of chocolate in 2019 alone. Taste experiences include chocolate tastings, fondue nights, afternoon tea and mocktail nights called “Taste After Hours” — one of their personal favorites being afternoon tea.

“It’s indulgent. You get to sit and relax — that’s what we want people to do,” Char says.

The Taste menu resembles a revolving door, and during the holidays, the recipes tap into every pumpkin, squash, cardamom, cinnamon and nutmeg opportunity. Around the calendar, Char and Morgan let their employees have creative license and the kitchen.

“We aren’t stringent with our employees. We have a couple things we like to keep on our tea menu, like scones and cucumber sandwiches. But other than that, they have the freedom to be creative,” Char says.

In fact, the popular Taste After Hours began as an employee idea.

“We want people to step out of Provo and into their own little world,” Morgan says. “They’re transported to a comfortable but new and unique experience. Usually they learn something, too.”

Some of the highest praise Morgan and Char Coleman have received about Taste and the menu comes from travelers who walk through the downtown Provo doors. When a Parisian says the tea is better than what is served in their hometown, or someone from England compliments the scones, then you know you’ve got it right.

“Even our teas are as good or better than a lot of places in London,” Morgan says.

“It’s amazing we don’t get sick of chocolate. I still eat it everyday,” Char says. “I never get tired of it. Never.”