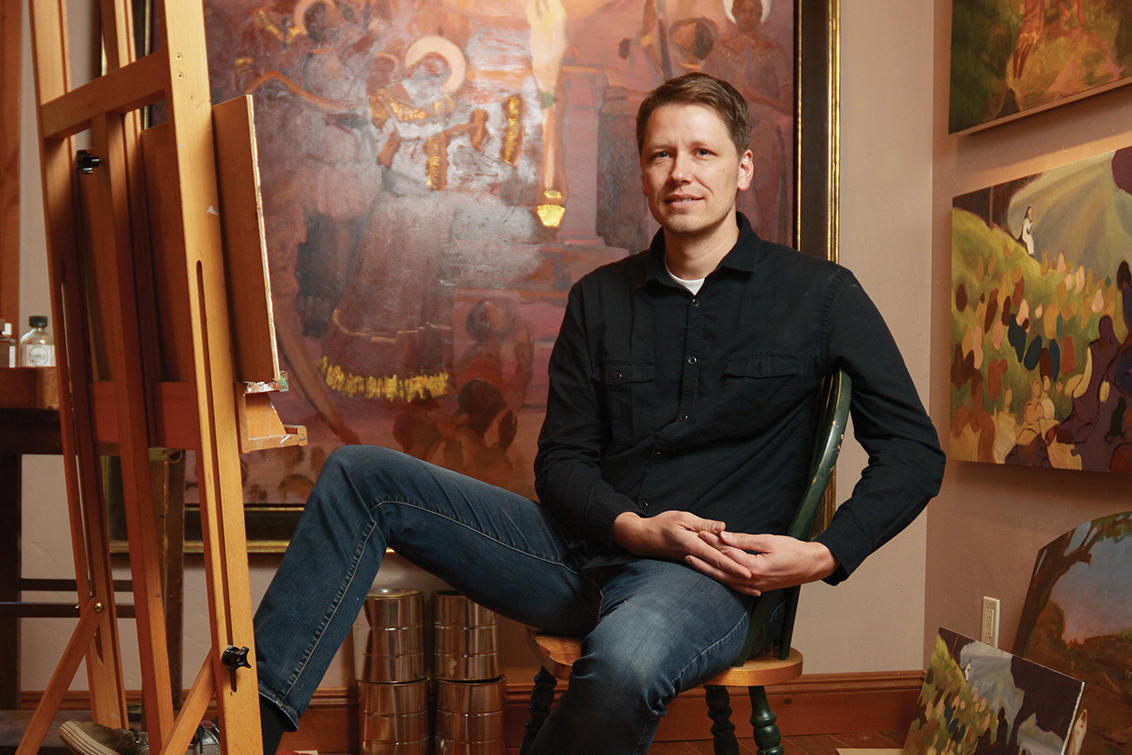 J. Kirk Richards grew up in Provo and now creates most of his visual magic from his home studio in Woodland Hills. His works — often depicting Jesus Christ and other religious themes — can be found in private collections, museums, the covers of books and in art retailers throughout the country.

Artist J. Kirk Richards has always been drawn to spiritual subjects. In fact, a quick review of his work shows numerous Christ-themed works illustrating the Nativity, including one called “Nativity in Reds.” Reds aren’t his only chosen hue (or even his favorite), but the spirit of Christmas is found in every color and almost every painting.

“Over the years I’ve done some landscapes and portraits, but the themes that draw me the most are religious themes — Christ and angels,” Kirk says. “It’s hard to push through and finish a piece — it has to hold my attention — and those are the ones I can pursue and push through and motivate me to complete them in a finished way.”

Growing up in the tree streets of Provo just east of BYU campus, J. Kirk Richards would walk to the Franklin S. Harris Fine Arts Center for French horn lessons and admire the displayed art. Eventually, he was drawn more to the brush and pencil than to the valves and bells of the French horn.

“When I was 14, I watched ‘Dead Poets Society’ and had a realization that I didn’t want to be a musician,” Kirk says. “It was then that I begged my parents to let me stop music lessons and switch to art.”

After a year of letting the decision cure, Kirk’s parents arranged private art lessons for him while he also took art classes at Provo High and, eventually, BYU.

“When I went to college, I was thinking I should do something more practical than art — maybe science — but I took a figure drawing class as a freshman at BYU from Hagen Haltern and I loved it,” he says. “I also thought I stacked up pretty well with other students.”

He determined to make his living as an artist. He prayed about the decision and promised that he would give back to other young artists if he could make his career in art.

Shortly after, he was called to the Italy Rome Mission and spent time in the great museums and cathedrals of the area, viewing the works of the Renaissance masters.

“That exposure was mind opening,” he says.

In college, he navigated his way primarily to oil painting and completed several pieces that are still among his personal favorites, including “Cherubim and a Flaming Sword.”

“By the time I was a senior, I felt like I had the tools to say something with oil paint,” Kirk says. “It felt like breathing. I could finally express myself with my painting.”

Since then, Kirk has become a premier religious artist with works in numerous collections — public and private. His work often features a contemporary feel made of rusts, browns and other earth tones.

“I love browns,” he says. “I love Rembrandt. I love the subtle shifts in color. There are lots of browns found in nature. I like to use the warm versions of neutral colors.”

His most well-known piece — “Every Knee Shall Bow” — features a multitude of figures bowing before Christ. However, the painting has a second interpretation that was unexpected to Kirk.

“That is a piece that had unintended interpretations by the public,” he says. “I wanted to paint a sea of kneeling people, but I’ve had a lot of people tell me that they look like sheep, which brings in other imagery. That’s a case of the artwork being smarter than the artist.”

As his career moves forward, he’s excited to work on more large-scale pieces that allow for more detail, better interaction and a different artistic experience.

“Working large scale allows me to put more into the figures and add more detail,” Kirk says. “There’s more texture. It’s hard to add a lot to things on a small scale. I interact with the work differently. It’s about the sweep of an arm instead of the flick of a wrist.”

In a self-described “mid-life crisis” moment, for his 40th birthday a few years ago he bought a bunch of colors he hadn’t worked with before and has enjoyed creating with a new palette.

Regardless of the color or the medium or the size, Kirk will continue to be drawn to the spiritual and bring collectors the Christmas spirit all year long.

Last year, J. Kirk Richards and his family were displaced from their home in Woodland Hills due to the Bald Mountain Fire. Kirk spent the time away at his studio in Redmond, Utah. With his regular routine out of focus, he decided to try a social experiment.

“I started doing a one-a-day painting on Instagram and started a few days before Halloween,” he recalls. “I don’t start the day knowing the subjects of the paintings or what time of day I’ll post the end result. I like keeping people guessing.”

The painting is posted with a price and the first one to comment gets “dibs.”

The experience was positive and Kirk is doing the same thing this year. He plans on painting 30 pieces in 30 days, for sale via Instagram.

“It’s a lot of work, but it was really fun,” he says. “It’s also a great way to engage with people through social media.”