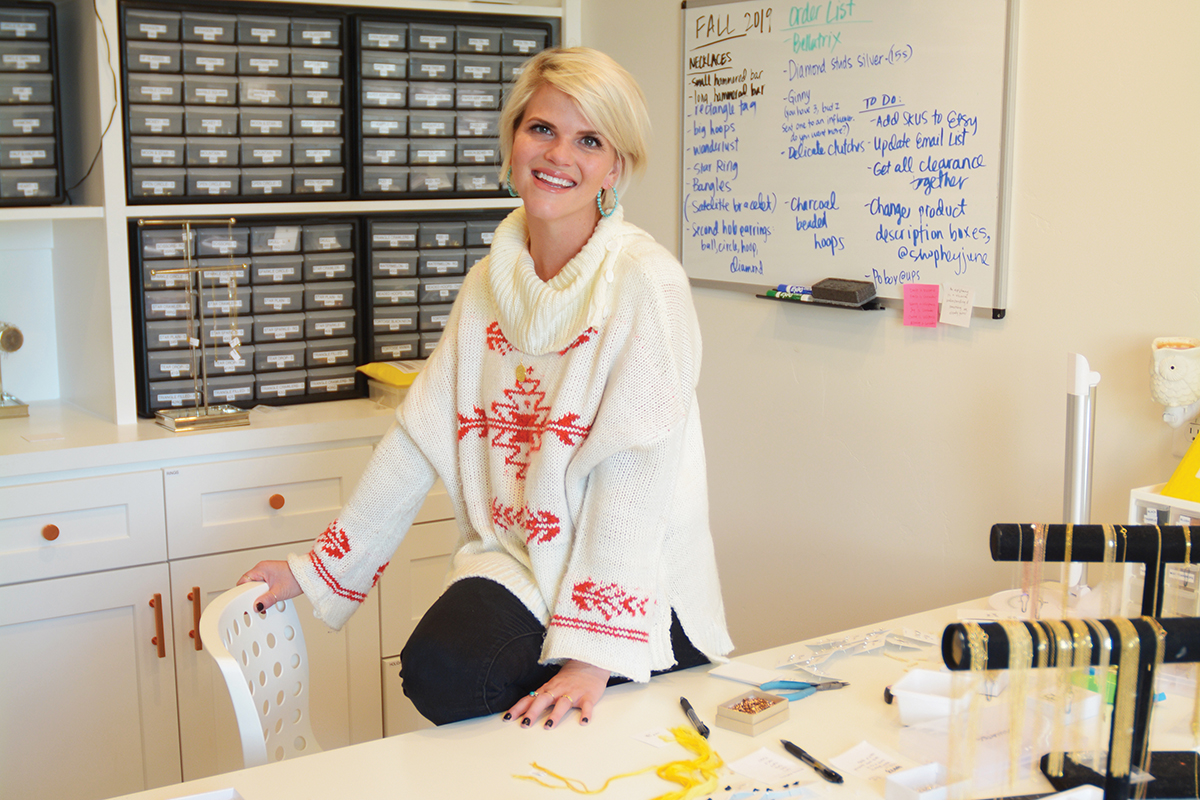 Bonnie Blackburn called her online jewelry business Hey June for three good reasons. First, her inventory started with classy birthstone pieces, so using a month in the name fit with her theme. Second, Bonnie had already named her first daughter “June” a few months before and loved including a family tie. And third, it gave a nod to a Beatles song, which was sure to bring good luck.

Bonnie Blackburn’s spirit color is yellow. From the branding of her online jewelry business Hey June, to her results on the Color Code personality test, to her pursuit of joy as a single mom, the color of sunshine captures it all.

When Bonnie was growing up in Price with her seven siblings, her mom started the tradition of serving only bread and milk on Christmas Eve, symbolizing the humble meal Mary and Joseph would have eaten the evening before the first Christmas. The Blackburn family would turn off all the lights in the house and gather around candles for their mini feast.

Now as spouses and grandchildren have joined the family, the Blackburns still gather for a simple meal on December 24 — only now they have added jams and cheese to the candlelit menu.

“I love the symbolism of light versus dark and of bringing things into the light,” Bonnie says. “This is the celebration of Christ and His birth, and He’s the light of the world. And then we celebrate with lights on the houses and the trees. I just love that.”

Gathering around light has become a theme for Bonnie’s life — both in business and personally.

While teaching English at Copper Hills High School in 2010, Bonnie found herself with hours each evening while her husband was at rehearsals or studying. So she spent her time creating her lifestyle blog called “Life of Bon” and wrote five days a week for the next couple years, hoping her blog would turn into another source of income someday.

Then in 2015, she needed to help support her family financially beyond her teaching job and decided to start an online jewelry business. She called it Hey June and branded it yellow.

“I chose yellow because is symbolizes light. To me, yellow is a color that brings a lot of joy,” she says, “You think about sunshine or anything that brings hope, warmth and love — that is all covered in the color yellow.”

By now, Bonnie’s blog had built a loyal audience and an Instagram following, so when she announced that she was opening her shop, orders came immediately. Bonnie continued to teach high school and run her business for the next three years until she decided it was time to press pause on teaching and focus solely on her family and the business.

In August 2018, Bonnie faced the hard task of publicly announcing her divorce. Her online audience had grown since opening the shop, and admitting to that community that the forecast of her marriage wasn’t sunny took a lot of courage. One evening, Bonnie quickly posted a black and white photo of herself and her husband, and captioned it with the regretful announcement and asked for support through this difficult time. She then turned off her phone and went into the basement and worked.

“I just cried and cried and worked on stuff for an upcoming sale. The basement was dark, dreary and cold just like the feeling of sorrow I felt,” she says. “When I emerged from the basement, it was probably around midnight. I turned on my phone and there was a floodgate of support.”

She sat reading texts and comments from friends and family from every part of her life — her mission, her time at BYU and BYU-Hawaii, friends of her parents, people from her hometown, even some strangers. The light started to filter back in to her soul.

Bonnie cheerfully runs the online shop from her home in Lehi. She works full time as a business owner and a single mom of two.

“A lot of times women buy into the narrative that we’re victims or there’s a lot out of our control,” Bonnie says. “Ideally I would have a partner take care of me, but I don’t. So I figured out a way to do it for myself and my children for the time being. Right now I rely on my faith. I have a strong network of support from family and friends. They say it takes a village to raise a child, and I think it takes a village to raise a business.”

It Was Called Yellow

As Bonnie Blackburn’s second Christmas as a single mother approaches, she wants her home and holiday to resemble the feelings she had when attending a weekend retreat with other bloggers. It was held at the home of a blogger she’d never met before.

“I remember going to her home and feeling she was amazing,” she says. “You could tell she was a very strong, beautiful, kind person. I remember thinking, ‘How do I get this? It feels so safe.’”

Bonnie wants her home, especially during Christmas, to capture that same feeling of warmth and safety and embody the colors of yellow and white.