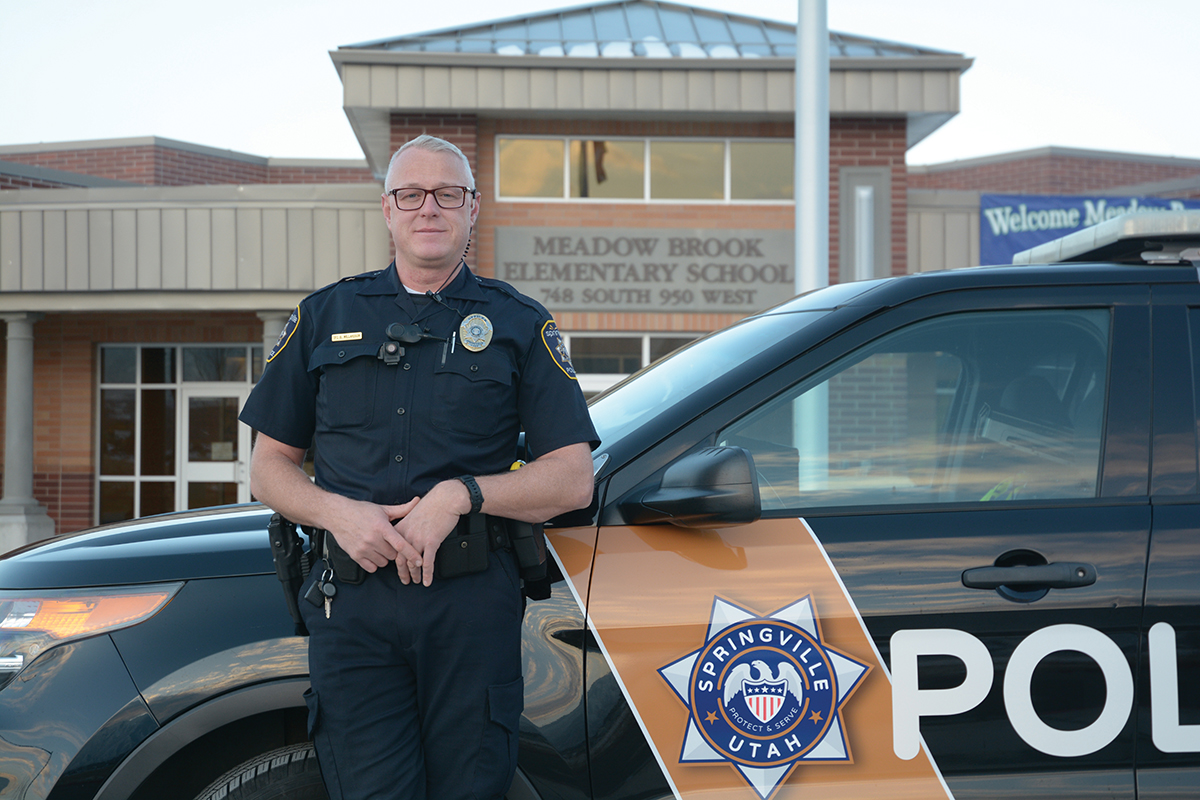 When Burlington Willardson started interviewing for his second career as a police officer, he knew he wanted to work in South Utah County.

“This is home to me — small town Utah. Springville is the furthest north small town in Utah Valley,” he says. “It’s a city set in the valley with good people, a sense of community and a desire to be friendly and courteous to one another. This is home. I’ve been waiting a long time to get home.”

Burlington spent most of his 20-year military career in California, but he grew up in Ephraim and moved to Payson during his junior year in high school. He attended Snow College through the Service Member Opportunity College.

“Growing up, my mom was very fair minded and wanted to see everybody have equality. My dad tempered that with ‘Life’s not fair, but you can make it as just as possible.’”

The mix of these two perspectives and a protective instinct shaped Burlington’s sense of civic duty and desire to help those around him.

“I have always hated to see oppression and bullying, so I do what I can to be a solution instead of a problem,” he says. “Police work was the only thing I was willing to come out of retirement for. I like helping people. I like being involved. I have a strong serve-and-protect background and mentality.”

Burlington was hired by Springville City in January 2019, and he finished the academy in April 2019. He’s grateful to have transitioned from upper management to having boots on the ground.

“I’m so happy to be back on the ground level where I just get to go out and do the work,” he says. “I don’t have to plan, train or organize anything. I just have to go out, respond to calls, and look for ways to be proactive in the city.”

Burlington enjoys interacting with the youth of Springville and will often cruise around the high school at night to check in.

“I like to see them out there enjoying life and being with their friends. It’s fun to hear their stories. They get along with a lot of our officers, so it’s fun to see that interaction,” he says. “I like the part of the job where I get to meet the kids and make positive connections.”

Even when giving a friendly reminder that curfew is closing in, Burlington makes sure the communication stays positive.

“It’s not, ‘Hey, you’re in trouble with the law.’ It’s just, ‘Hey, what’s going on? How are you doing? You know what time it is? I know you’re having fun, but you’ve got five minutes until curfew,’” he says.

Burlington’s initial decision to join the military came from a combination of a duty mindset, a curiosity for adventure, and the prospect of having his education funded.

“I wanted a challenge. I wanted to have a chance to expand my horizons and have an opportunity to pay for education I wasn’t able to pay for on my own,” he says.

In August 2018, Burlington added to his education with a bachelor’s degree in leadership management and communication from Excelsior College via an online program.

Because Burlington honed his ability to communicate while earning his degree and while in the military, his people skills have become a crucial tool as a police officer.

“I’m not easily riled, and I’m willing to listen to another person’s viewpoint to understand what they’re trying to tell me,” he says.

During the last 10 years of his military career, Burlington worked in recruitment. He would train recruiters and prepare young men and women to enter basic training.

“That chapter of my life has been beneficial because I can relate to individuals on different levels and understand what is important to them,” he says.

Burlington believes police officers should both work with the community and be a part of the community. The Springville Police Department has the same perspective.

“One thing Springville really does well is keep the relationship between the community and the police officers positive,” he says.

As Burlington has integrated in the Springville Police Department, he appreciates the culture between all the officers.

“We all get along and respect each other. Everybody who works here is willing to help one another in whatever circumstances,” he says. “It reminds me of a small military unit that has trained together and fought together. They’re dedicated to one another and willing to help out where we’re needed.”

Springville Police Department assigns three school resource officers to each elementary school. Burlington spends 20-30 minutes each shift at Meadow Brook Elementary School to familiarize himself with the school and talk with students and teachers.

“If something happened in that school, we are familiar with the layout and we would be tactically-mindful of what’s available to us,” he says.

This proactive approach helps the students have a healthy perspective of police officers and understand their purpose is to protect.

“If the kids can see the police are here to help — that we aren’t scary — it gives them a better idea of who we are. So now when there’s a stressful situation, we’re more likely to have good communication. They can hear what we’re saying versus the idea that the police are just as dangerous as the bad guys,” he says.