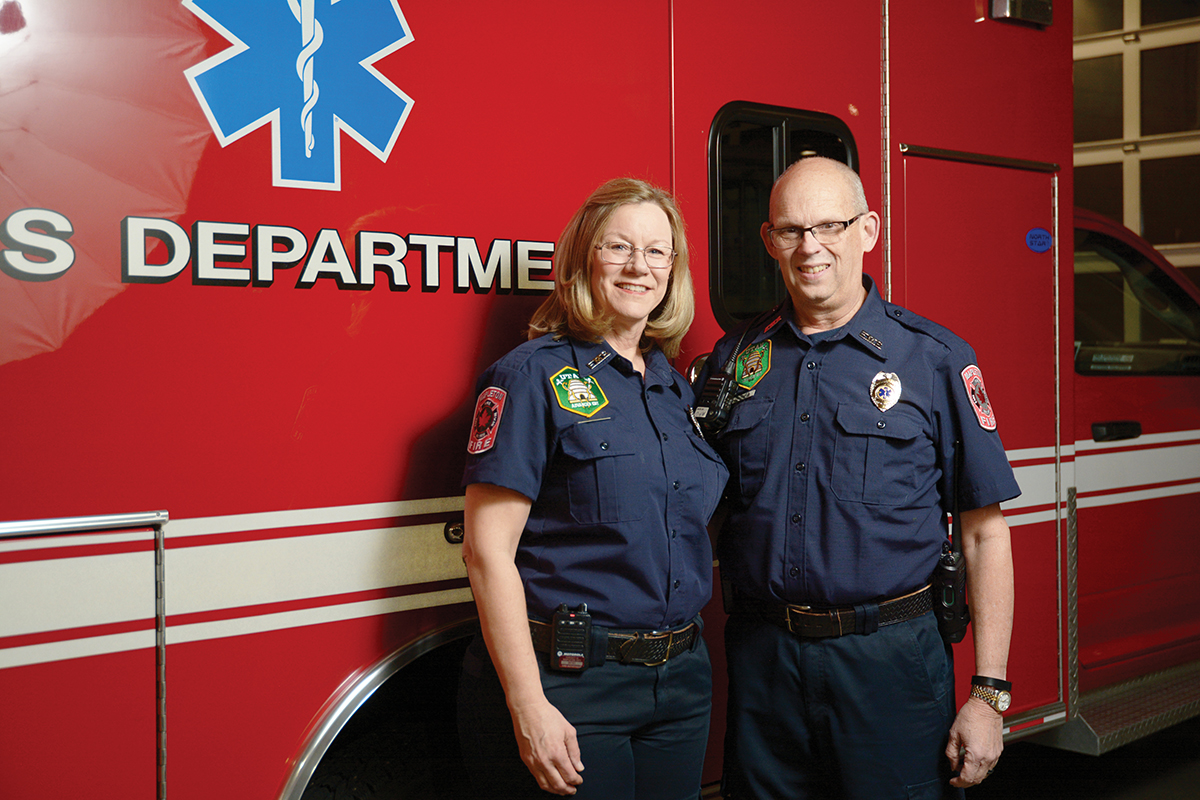 John and Gail Higgins have shared a last name for 36 years. They’ve shared their home in Mapleton for 25 years. And now they’ve shared the hobby of volunteering as EMTs for Mapleton City for nearly 10 years. John began volunteering on the ambulance in 1994, and Gail joined him in 2010 after their three daughters moved out.

“I realized if I wanted to see him, I better join him,” Gail laughs. “So at 52 years old, I became an EMT and then an advanced EMT.”

Both John and Gail post for volunteer EMT shifts at the Mapleton Fire Station whenever they can.

A volunteer firefighter or EMT must have the same training and certification as a full-time employee. Volunteers are paid for their time, but they aren’t salaried employees and don’t have benefits.

Because they live in Mapleton, John and Gail can sleep at home while on call instead of at the station.

They’ll run calls during the night and still wake up with the rest of the world to punch the clock at their full-time jobs. John works as a project manager and engineer for UDOT, and Gail is the accounts payable clerk for Mapleton City.

“There have been days where we go to work a little more tired than others, but I can usually get through it just fine because I know I’ve helped somebody,” Gail says.

“It’s not for everybody,” John says. “A lot of people can’t do it for whatever reason. We are — knock on wood — blessed to be able to handle those situations. We’ve had some bad calls. They stick with you.”

Gail is quick to identify why they have been able to cope.

“I see others who struggle in this profession. It helps that we have a spiritual basis to help us deal with the bad calls. That doesn’t always make it better, but it helps,” she says. 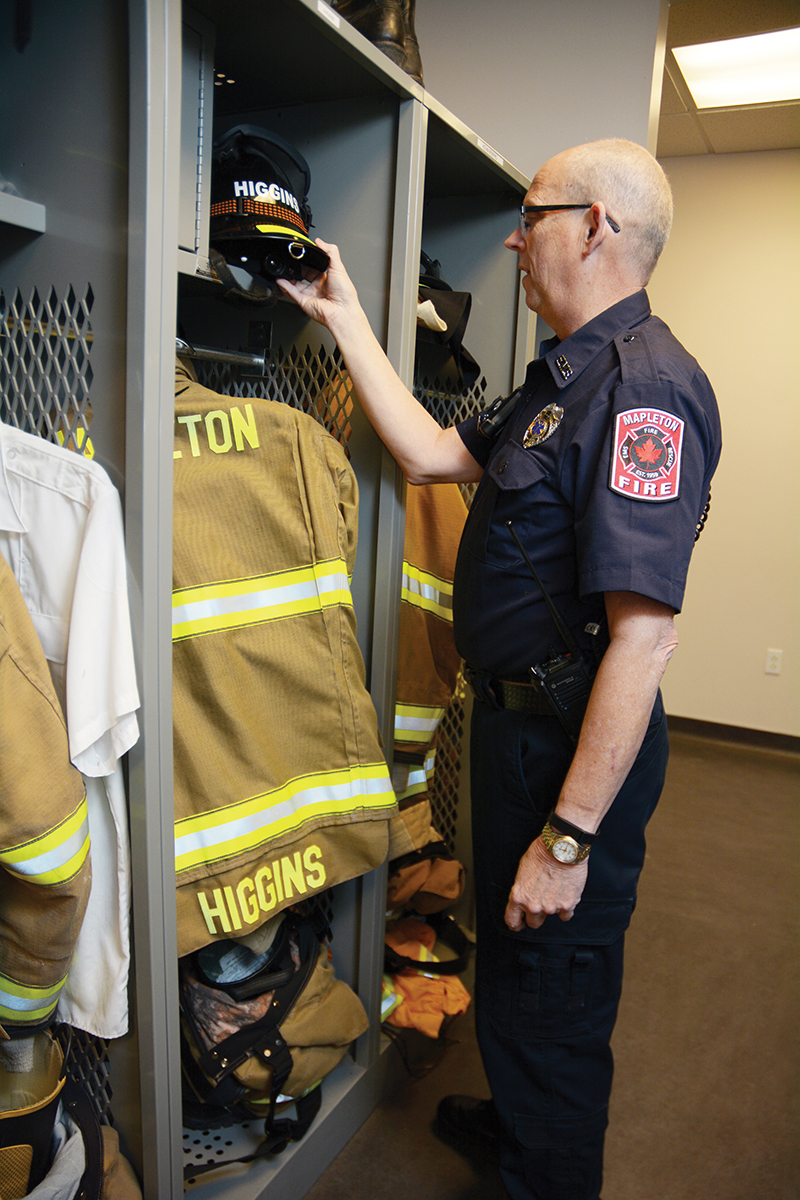 John first volunteered as an EMT when living in Northern Virginia in 1991. He started in Mapleton in 1994. Because of John’s engineering background, the new Mapleton fire chief recently encouraged him to add firefighting to his resume. John has completed the training to become a volunteer firefighter and is preparing to take the practical exams soon.

Because of Mapleton’s small population of about 10,000 people, Gail says someone from the crew usually has some previous connection to the patient.

“When you volunteer, you have a desire to serve the community. People in distress are comforted by knowing you,” John says.

John and Gail can’t pin down the source of their desire to serve their fellow man. It’s innate.

“We love doing this because it fits very easily into how we like to live our lives,” Gail says.

Gail and John raised their three daughters in Mapleton. Their daughters now live in Lehi, Montana and Texas.

“They’ve all graduated from college and picked health-related degrees. We’ve often wondered if that had to do with the influence of John being on the ambulance most of their growing up years,” Gail says.

In situations where a stranger needs medical attention, the Higgins daughters jump in and help — just like their parents have shown them for years.

When traveling, both John and Gail are sensitive to those around them, offering to help if someone needs quick medical attention. This has happened in several places they’ve traveled, such as a cruise ship, an airplane, a hotel lobby and Arlington Cemetery. 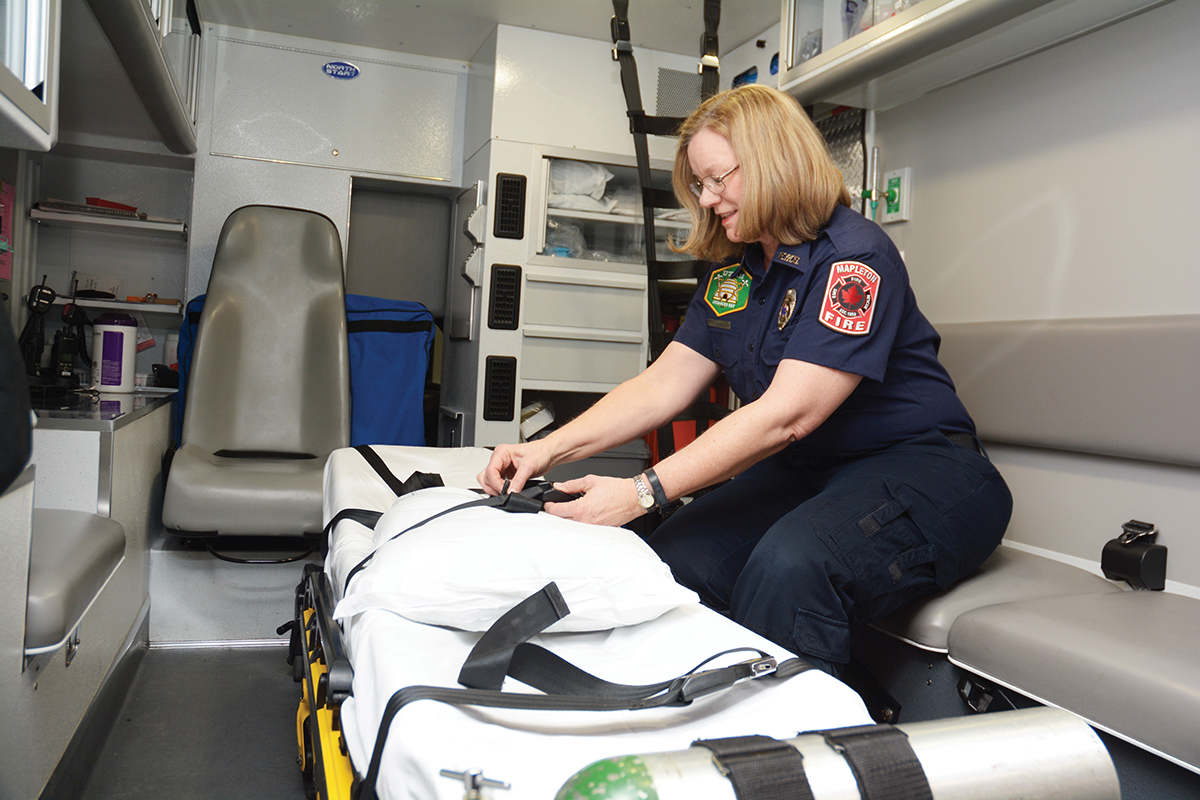 The Mapleton Fire Department was founded in 1959 as an all-volunteer organization. In 2018 the city combined the fire and EMS departments. Now, the department includes both fire and EMS personnel made up of full-time, part-time and volunteer positions.
“There’s a good camaraderie and friendship amongst everybody,” Gail says. “You have to support one another in this type of work. Those drawn to these positions are like-minded. They want to serve the community and care about people’s feelings.”
Mapleton was the first city in Utah Valley to use the iSpyFire app.

Awards to Mapleton Fire in 2019