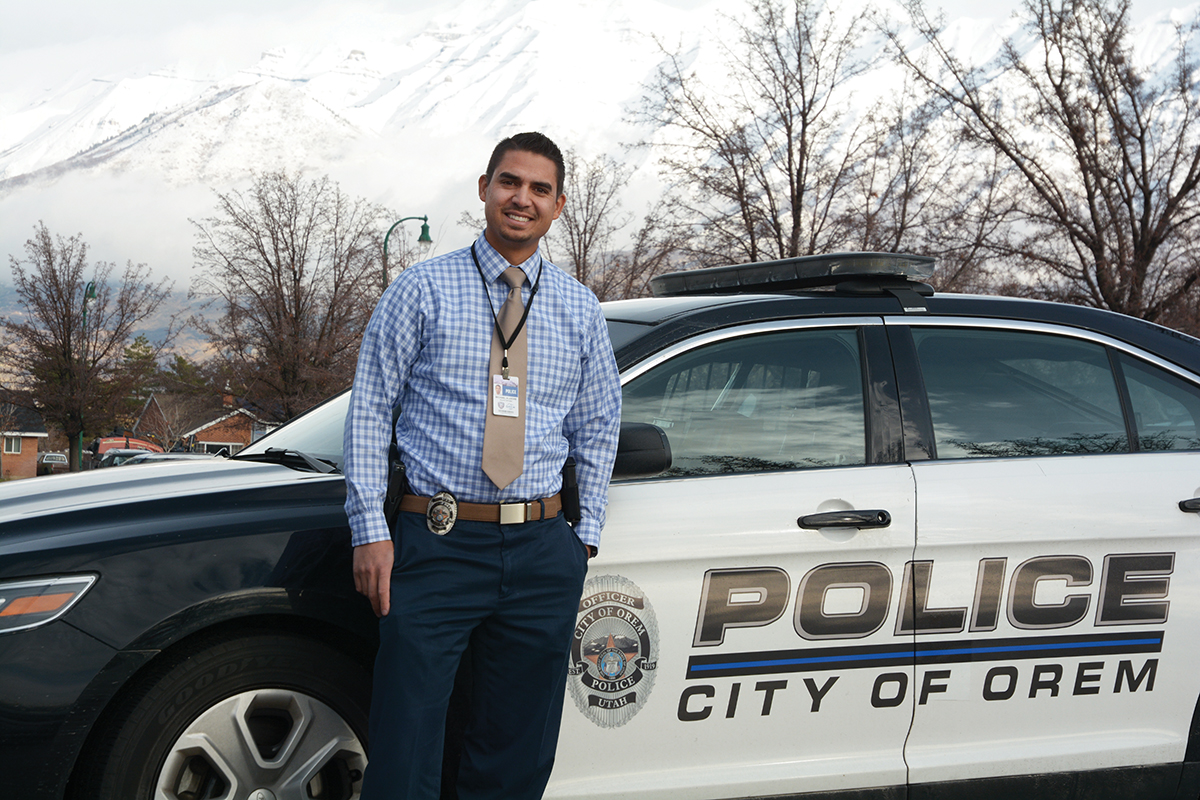 In February 2020, Michael will have worked for the Orem Police Department for five years. Michael moved to Utah Valley in 2005 from the Seattle area. He and his family live in Provo. He has three kids, ages nine, six and three.

“I’m known around here for telling stupid jokes while keeping a straight face, so people don’t know if I’m ever joking or not,” he says.

After working for just over two years in the Orem Police Department, Michael Locke was selected to join the detective division.

Michael found his skills early on, specifically in writing reports and search warrants. He wrote his first two search warrants on two different SWAT standoff arrest situations where a man had barricaded himself in a house.

But his skills aren’t limited to detective work. Michael is the mastermind behind Orem Police Department’s social media accounts. The department posts on Facebook and Instagram, and recently Michael expanded by using the video social media app, TikTok. One of their videos has more than 2 million views. His #tattletaletuesdays and Shenanigans posts are a weekly favorite, where he posts funny updates of the cases the department addresses each week.

Michael is department-famous for his poker face and sarcasm, which got him selected to manage the social media accounts.

“You have to have a weird mind. I think anyone can be funny online, but most people aren’t willing to put in the time to read over cases and try and make a joke out of each one,” Michael says.

The community is engaged in his posts and he often gets dozens of comments and likes. After posting, Michael will usually be glued to the evolving comments thread to see how people received his humor.

“I love seeing the comments of when people actually laughed out loud and tag others. That’s why I do it,” Michael says.

Michael believes the best way to showcase the police department and its positive culture is through Facebook.

“It takes me longer to write the Shenanigan posts than people realize. I’m no super comedian. But when I sit down and look at it, I can oftentimes pull out the humor in our cases.” Michael says.

“If you don’t have a thick skin, this is probably not the job for you,” Michael says.

In the event of a shooting or homicide, it’s all hands on deck for the Orem detectives.

“My favorite part is working big cases where I feel like I can contribute,” he says.

Most days Michael fights crime and solves mysteries from behind his computer screen. Usually for over 10 hours a day, he researches suspects (he calls it cyberstalking), gathers evidence, checks video surveillance and reads witness statements.

Other days, things get more exciting, and Michael gets to gather a team, throw on the tactical vest that says “police” on the back, serve a search warrant on a house, remove all the occupants and look for evidence.

Most of Michael’s job as a detective is using common sense and problem solving.

“I feel like I am good at that,” Michael says, “I got it from my dad. We’re do-it-ourself kind of people, so I’ll never go pay for my oil change or for my brakes pads to get done. With stuff like that, I’ll do it all myself.”

Michael credits his problem-solving skills to the toys he played with as a kid, such as Legos. It’s come full circle and Michael’s son now loves Legos.

“It’s a do-it-yourself, figure-it-out mentality,” Michael says. “Recently the door broke on my wife’s minivan and the cable snapped. It was going to be $1,400 to get fixed at the dealership. I just bought the cables for $95 off eBay and pulled it apart and fixed it. It took me about four hours, but I did it. I just refuse to pay when it’s a solvable problem.”

Q Cards: How to Recharge Without Using a Day of PTO Previous post

The Comeback Couple: Ashlynn and Coby Mitchell Overcome Addiction and Betrayal Next post