Home Featured Double the Dreamers: Brad and Shae Robins Reach For the Stage and Lift Each Other 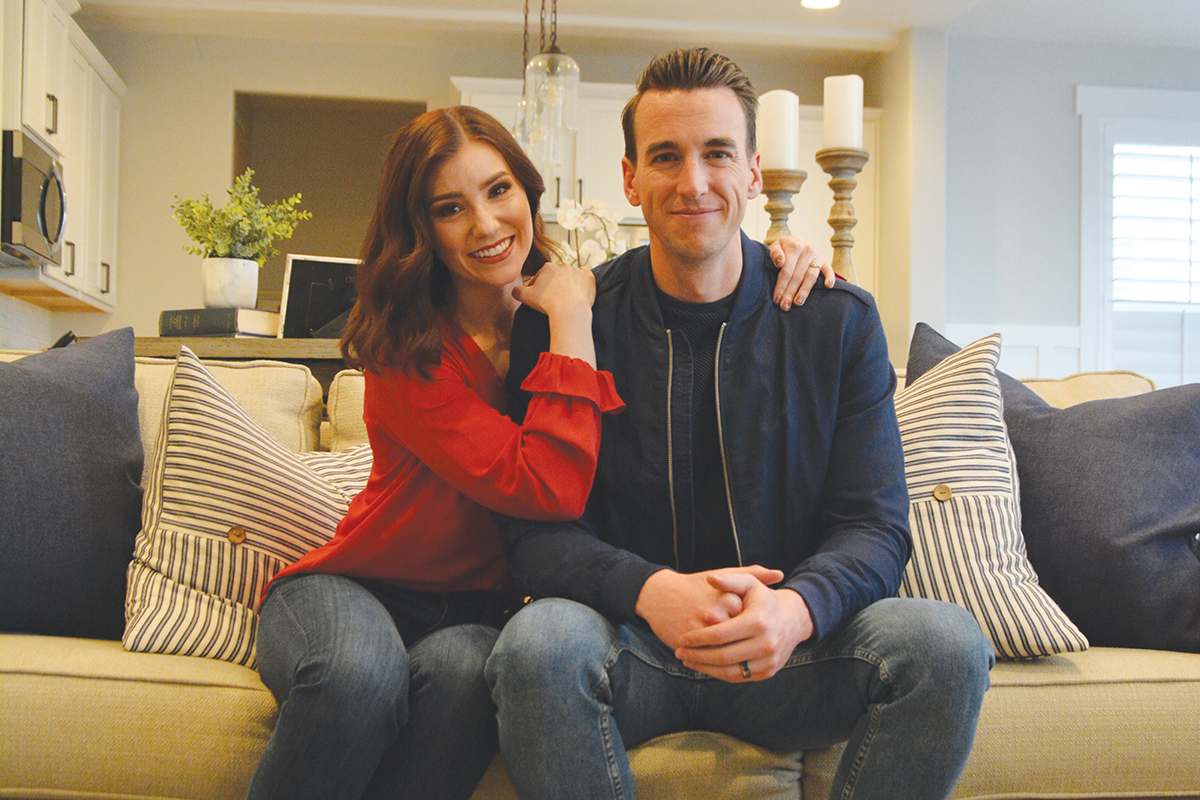 He’s one of the gentleman of GENTRI from Centerville. She’s a triple threat from Orem. Together, Brad and Shae Robins harmonize their lives with a front row seat and backstage pass to each other’s careers.

Brad Robins and Shae Hunsaker met in 2011 as members of BYU Young Ambassadors. That summer they toured to South Africa, Botswana and Swaziland with the group.

“On Young Ambassadors, we had a variety of experiences — onstage, offstage, in the limelight, out of the limelight. That gave us an opportunity to see each other in different scenarios — spiritually, mentally and emotionally,” Brad says.

The couple married in March 2013. Brad graduated a couple months later with his business management degree from the Marriott School of Management and took a job at Adobe. Shae graduated from BYU a year later with a BFA in music dance theater.

The two have found ways to make performing their full-time pursuit — Brad behind the mic and Shae on the stage.

In 2014 Brad joined a three-part harmony with Bradley Quinn Lever and Casey Elliot to create GENTRI. The gentleman trio has released six albums since its genesis and has performed alongside voices such as Kristin Chenoweth, Idina Menzel and OneRepublic. For the first five years of making music, Brad and the other members of GENTRI held full-time jobs.

“I would wake up early and go to work. When five o’clock hit, I was in GENTRI mode, either rehearsing, performing, networking or meeting, until about 1 or 2 a.m.,” Brad says.

Toward the end of 2018, the members of GENTRI began talking about quitting their day jobs and pursuing music full time.

“When they started that discussion, they brought the wives in,” Shae says. “They cared to know our opinions and feelings. Instead of just, ‘Hey honey, this is what we’re doing,’ all of us came to that decision together and it felt right.”

“I get up every day looking forward to what’s next,” Brad says. “I work five to six hours a day longer doing GENTRI than I ever did at my nine to five. But the days go so fast because I love it. That’s what has made enabling Shae to do what she loves so easy. I know what it feels like to do what I’m passionate about for all the right reasons, and I want other people to be able to do the same.”

Life On The Stage

After graduating from BYU in 2014, Shae spent three summers performing at Tuacahn Amphitheater near St. George. She did nine shows and played or understudied many iconic roles such as Sofie in “Mama Mia!,” Katherine in “Newsies,” Princess Fiona in “Shrek the Musical” and Mary Poppins and Snow White in “When You Wish.”

For six and a half months of each year, Shae lived in St. George while Brad kept his job at Adobe and their home in Orem. When he wasn’t touring with GENTRI, Brad would trek south for the weekend so they could be together.

“He was willing to support me in a distant relationship for a length of time equal to a year and a half where he would drive four hours each way just to be with me on the weekends. If that doesn’t show love, I don’t know what does,” Shae says.

Now the two live in South Jordan, and Shae is back on northern Utah stages. During summer 2019, she played Ella in “Cinderella” at the Hale Center Theater in Sandy. Shae will return to the round during the 2020 season as the lead in “Mary Poppins.”

The Duet of Life

“Through our entire marriage, Brad has never let my light dim. He supports me in anything I’ve ever wanted to do and helped me feel fulfilled,” Shae says.

Brad and Shae still keep quality time at the top of their priority list. When GENTRI tours, Shae comes along as often as her performing schedule permits.

“We love traveling, we love performing and we love people. Touring allows us to marry those three worlds together. Just like in any relationship, we find ways to make our circumstances work — and not just make it work, but to make it memorable,” Brad says.

“He’s the perfect man for me in every way. He is extremely patient. He’s always the first to apologize. (And I hate to even admit that.) One of the qualities I admire the most about Brad is his ambition. If he doesn’t know how to do something, he will do whatever it takes to figure it out. He will use his resources. He’ll call people. He’s not afraid. He’s not too prideful to humble himself and seek out help for anything he’s interested in doing. And I’ve always loved that about him.”