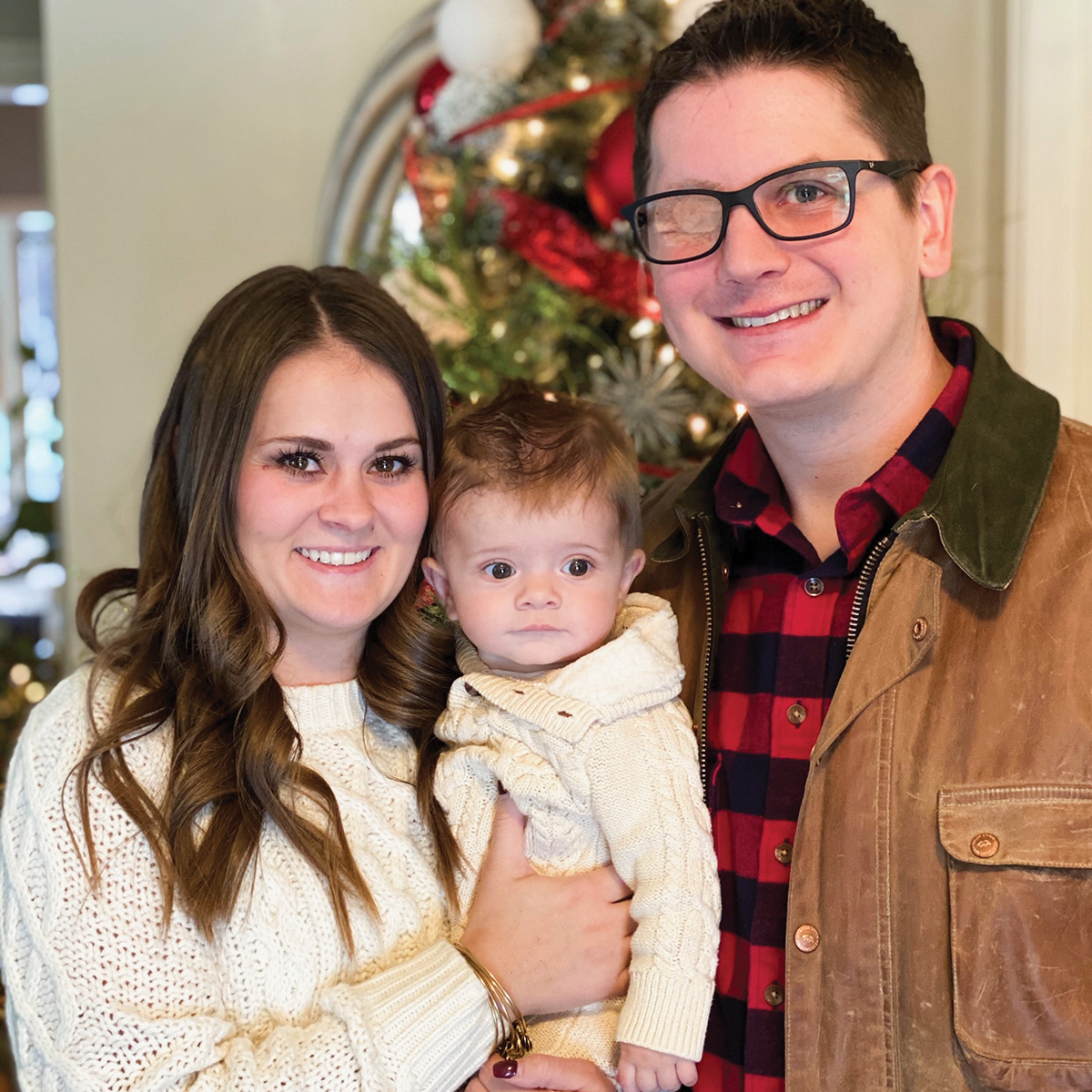 Morgan works as a second grade teacher at Meadow Brook Elementary School in Springville. Nick works as a machinist at Novatek in Provo. Together, they are raising baby Theo in the midst of Nick’s remission and being decidedly happy.

On March 14, 2019, Nick Peterson learned that the sinus infection he had been fighting for two months was in fact an aggressive cancer called sinonasal undifferentiated carcinoma, or SNUC.

Nick received his diagnosis over the phone while attending an OB/GYN check-up with his wife, Morgan. The Springville couple were expecting the birth of their first child, Theo, within the month.

The next Monday, Nick had a biopsy that removed about a quarter of the orange-sized tumor pushing against his right eye and his brain membrane. A couple weeks after his diagnosis, he was scheduled to have a second surgery to remove the rest of the tumor. The day before he returned to the operating room for that major surgery, Nick met with each of his doctors.

Because of the nature of the cancer, they told Nick he had about a year to live.

“They worded it as, ‘Buy a fishing boat and live it out,’” Nick says. “Then we had to go tell my parents and grandparents I had a year. I’ve never seen my dad and grandpa cry so hard in my life. That was the hardest thing to do.”

During the pre-op meetings, the eye doctor recommended they also remove Nick’s right eye to increase their ability to remove the whole tumor. The doctor explained that in the coming weeks, the radiation treatments would likely kill his eye anyway. Removing it soon would increase his chances of survival.

Nick had about 15 minutes to decide. It was 8 p.m. and he would have to be up at 4 a.m. for the operation at Utah Valley Hospital.

“People ask me all the time if it was hard to let them take my eye. And it wasn’t because I didn’t have time to worry. And it was the right decision. I see five doctors consistently, and they’ve all said, ‘We could remove 99 percent of the tumor because you let us take the eye.’ It was way more important to do it the right way than to try and keep my eye,” Nick says.

For this second surgery, Nick’s doctors removed his right eye and scraped away the tumor. After the surgery, Nick stayed in the hospital for three nights and was released to come home. After only four hours of Nick being home from the hospital, Morgan was having frequent contractions and they headed back to Utah Valley Hospital.

The hospital staff gave the Petersons a room with two beds so Nick could rest while Morgan went through labor. When it came time to push, Nick sat by her side and held her hand for two hours until baby Theo arrived.

For his first month of fatherhood, Nick and Morgan didn’t know if he’d live to see his son’s first birthday. As they continued seeing specialists, the two started gaining hope, especially when meeting with his pathologist and radiologist.

“They deal with cancer all the time. When they were confident enough to say, ‘We’re doing our best to give you the rest of your life. We wouldn’t have put you through all of that surgery if we didn’t think you had a chance,’ it made me feel better,” Nick says.

As the doctors gained confidence and the chemotherapy and radiation treatments continued, the ticking clock started to quiet down.

“Even though we found out I likely had more than a year left, we spent way more time with family than we ever have,” Nick says. “When people ask why I’m so happy, I tell them, ‘If you truly only had a year, would you want it to be the worst year of your life?’ You have to just be happy.”

Although the timing of having their first child happened one month early according to their “five-year plan” and piggybacked on Nick’s cancer treatments, Nick and Morgan wouldn’t rearrange the calendar.

“Theo is such a happy baby. I think he’s the reason why we’ve been so happy,” Morgan says. “I know we would be positive or happy people without him, but having someone like this so happy all the time, it’s just contagious.”

Before experiencing the cancer-baby double whammy, Morgan and Nick had a good marriage where they communicated well and supported each other. Now, they’ve mastered those skills under pressure.

“I learned if you don’t talk about things, it just bubbles up inside of you and you get frustrated with each other when you don’t mean to. At first, I would hide it from him when I was frustrated because I didn’t want to upset him. But then I learned I need to talk to him because we’re both going through it,” Morgan says.

In the weeks after Nick’s surgery and Morgan’s delivery, family members were always at their condo in Springville helping. They received an outpouring of love and support from family and friends that came in the form of text messages, casseroles, DoorDash dinners and financial donations.

“I didn’t want to do any sort of GoFundMe or fundraisers. I didn’t like that kind of thing,” Nick says.

So other people organized it for them. The neighbor of Nick’s mom sold shirts that said “Peterson Strong” to help raise money. Nick’s sister started a GoFundMe campaign. In the first couple days, it hit $5,000. More than a thousand people shared the GoFundMe page, and more than 400 people have donated a total of $25,000. Other donations have come outside of the crowdfunding platform.

“We never asked for people to do it,” Morgan says.

“It was instant relief,” Nick says. “Knowing we had that as a buffer just made us not have to think about the cost. We could focus on what we were trying to do.”

Double the Dreamers: Brad and Shae Robins Reach For the Stage and Lift Each Other Previous post