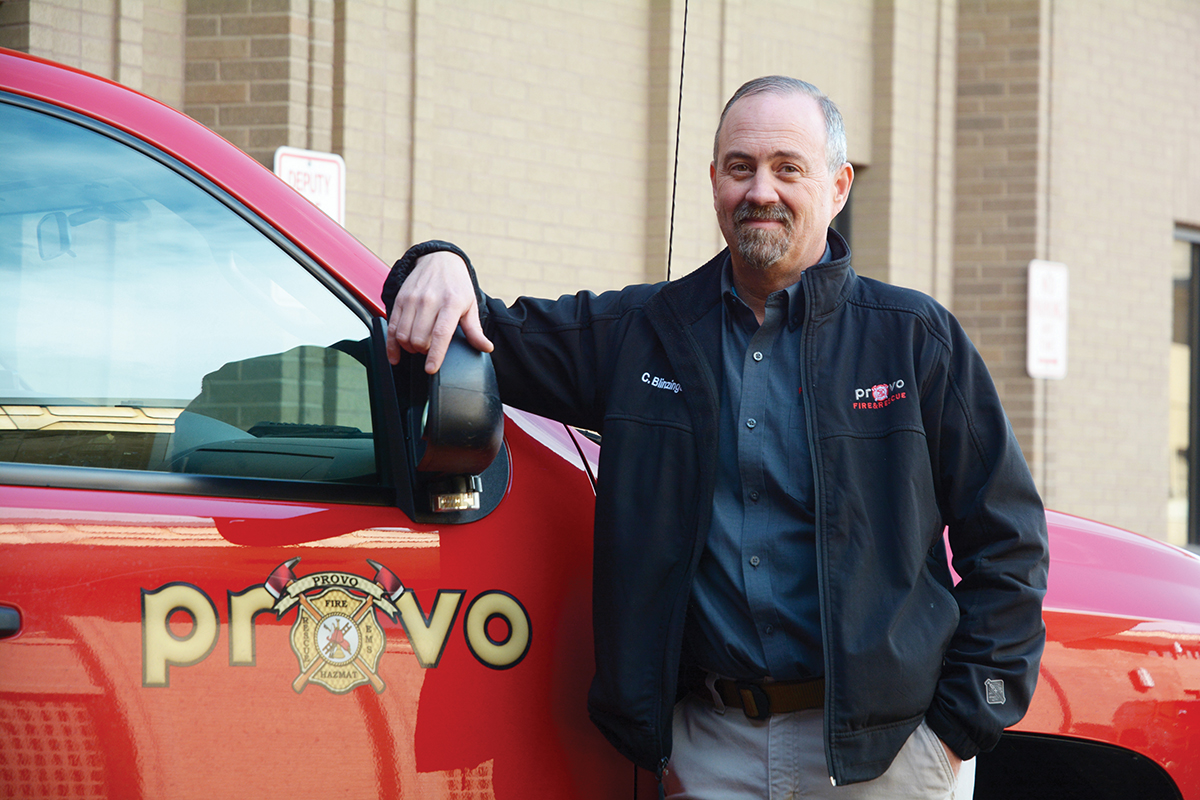 Chris Blinzinger’s job is to prepare for the best and worst case scenarios — and every possibility in between. As the emergency management coordinator for Provo City, he works with the health department, sheriff’s office, governor’s office, national guard, local hospitals, BYU and UVU to prepare Provo City and the surrounding area for emergency situations.

“Anytime I’m meeting with an emergency manager or representative from another organization, I see we have a similar function and job. I know I can count on that person to help me,” he says.

About 13 years ago, Chris Blinzinger remarried, moved to Utah and started paramedic school. Previously, he had lived in Colorado working full time on the retail side of a lumber yard and volunteering as a firefighter and EMT. He loved serving his community, so pursuing paramedics seemed like a good fit — until he discovered emergency management.

“I found emergency management really fit my personality, my style and my perspective,” Chris says. “Growing up in Indiana, I always saw a cellar full of canned foods as just the way we did life. But that is preparedness. Every year, butchering animals for the winters, canning foods — that’s all part of preparedness.”

So Chris switched his degree and earned a bachelor’s in emergency services administration from UVU in 2010.

In September 2010, Chris started working part time at Provo City as an emergency management coordinator. Six months later it turned into a full-time position. Ever since, he has worked to prepare and protect Provo for myriad emergency situations that could beset the valley.

“I loved being a volunteer in rural Colorado. I responded on the ambulance and the fire truck. That volunteer position helped lead me into the career I’m in now. It’s challenging, but it is so rewarding. And it’s heartwarming to see people are good and want to help,” he says.

Because of Utah County’s high risk of forest fires, floods and earthquakes, Chris says the area has a potential for a disaster with a similar destruction to the 2018 fires in Paradise, California.

“We have to look at our hazards and vulnerabilities and determine what do we do if that earthquake or flood happens,” he says. “I anticipate what might be missing in that circumstance and how we can restore services to the community.”

One way Chris prepares is ensuring that Provo meets all requirements for federal funding, so in the state of emergency, the city is already eligible for financial help from FEMA.

Also, Chris hosts preparedness presentations for community groups, classrooms, neighborhoods and church groups. In these settings, he aims to provide information and empowerment so people can prepare their own families. He advocates everyone implement the Be Ready Utah slogan: “Get a kit. Make a plan. Be informed.”

“In the end, if we did absolutely nothing to prepare, we would eventually be OK. And my job is not going to stop any major incident from impacting our community,” Chris says. “But my job can help reduce the chaos and be better prepared to respond and take care of our community members.”

From Endzone to Evacuation

After any event at LaVell Edwards Stadium, Provo police join with other traffic personnel from Orem, BYU, Utah County and state patrol to safely move 65,000 people. Chris says this also functions as a training for how to execute a major evacuation.

“Circumstances that are normal and under control help us prepare for an emergency,” he says.

Chris and his wife, Kendra, live in Pleasant Grove. Together they have a blended family of eight children and six grandchildren. In all things, he’s grateful for her support.

“She has been a wonderful partner to get me from being middle-aged and going back to school to where I am today,” he says.

Chris’s professional focus on preparedness shows up in his family life as well. He always packs coats and water bottles in the car — just in case. 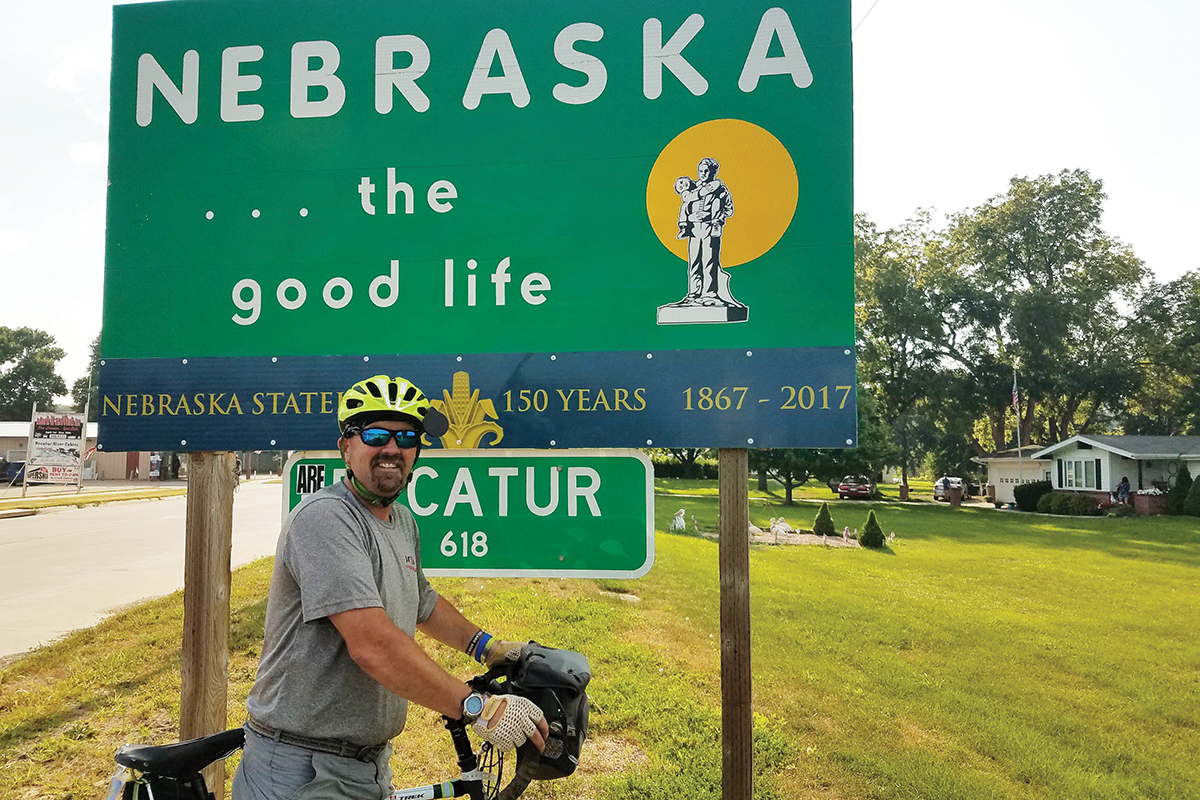 When Chris went back to school in 2007, he sold several of his possessions to afford tuition. As a result, he rode his bike to work every day. He fell in love with the view from his handlebars and decided to try bike touring. He joined a Facebook group and introduced himself. A couple weeks later, someone from the group invited Chris on his first bike tour. Since then, he’s ridden through Washington, Oregon, Wyoming, Utah, Nevada, Idaho, Iowa, Colorado, Arizona and Nebraska.

“It is almost a meditation as you pedal along — it’s not a race. It’s satisfying because I’m self-supported. We sleep on the ground. We cook our own food on a little stove. We have to pack a lot of water with us,” Chris says. “It’s empowering to see the world from a different view. You can’t believe it until you’re riding across some little two-lane highway in the remote parts of this country on a bicycle. You start to realize things and find out about yourself.”

Chris is also a host on WarmShowers.com, which means he provides people on bike tours through Utah a shower, a meal and a place to sleep. He has hosted cyclists from New York, Idaho, Czech Republic, Taiwan, South Korea, France and Germany.

“It’s a great opportunity to bring people into my home, give them something and swap stories. We meet someone from a different country, share a little bit of what we have and enjoy their company,” he says.