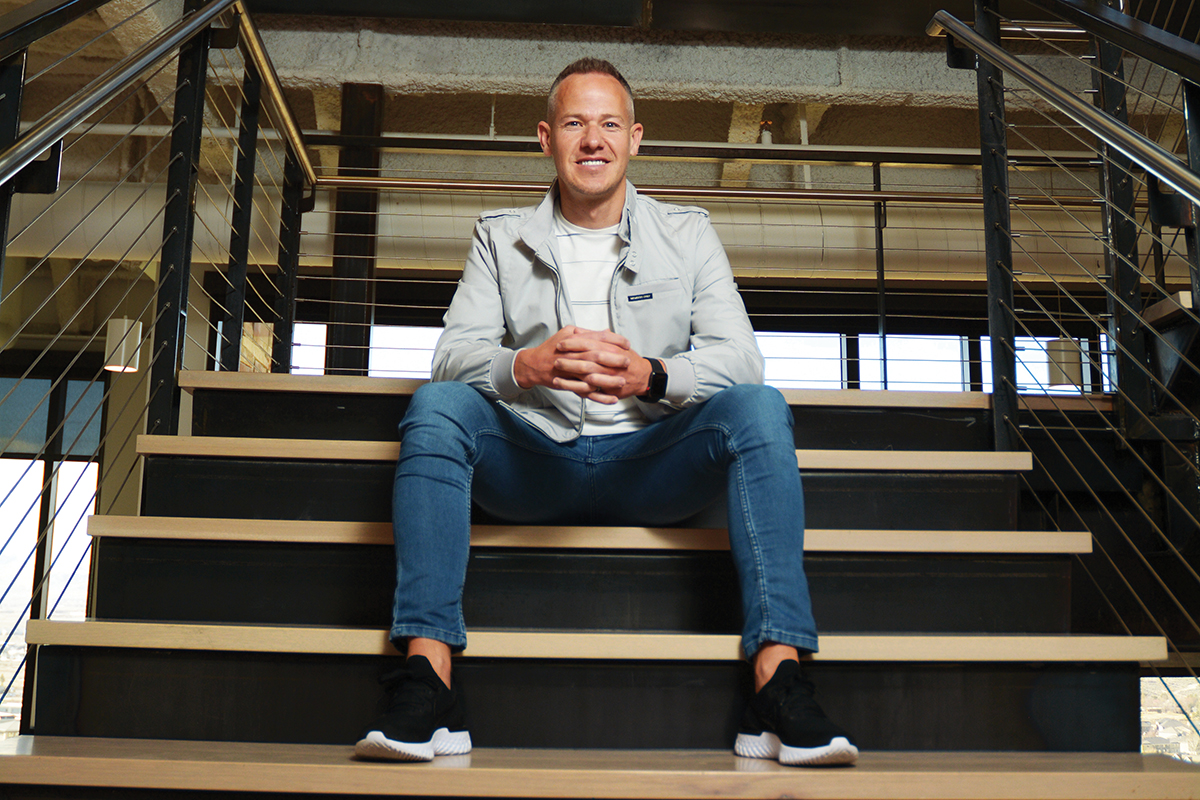 THE CLIMB With 300+ employees and a recent funding round of $55 million, Lendio is growing to greater heights by the day. But founder and CEO Brock Blake is all about perspective. “It’s like we’ve climbed this huge mountain, we’ve fought and struggled and conquered, and then we finally get to the top of the peak where we see this incredible view. But then we turn around and see that we’re only a third of the way there — there is a huge mountain still left to climb,” Blake says. “That’s where we are right now with Lendio. Our market is enormous, and we’re just getting started. Thankfully, I love a good challenge.”

It was our annual 40 Under 40 feature, and this particular editorial boasted a school theme for the cool kids around town.

At the time, Blake was the founder of FundingUniverse, a “speed dating” site of sorts connecting entrepreneurs with investors. He had won $50,000 at a BYU entrepreneurial competition led by Greg Warnock and Paul Allen, and bright-eyed Blake was launching his company from idea to universal domination.

“The cover picture couldn’t be more appropriate,” Blake says. “That kid had a lot to learn.” 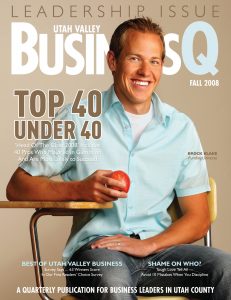 BLAST FROM THE PAST
Brock Blake rocked the Fall 2008 cover of BusinessQ for our 40 Under 40 feature.

From Universe to Main Street

FundingUniverse grew to more than $10+ million in revenue and was a steady business. But Blake saw the need for a company pivot. The majority of entrepreneurs approaching them were from brick-and-mortar businesses: retail, restaurants, landscape companies, etc.

The universe was telling Blake to focus on Main Street.

“The chance of those businesses raising angel or VC money is very small, which means we didn’t have a great business model. Those companies don’t need equity capital, they need a loan,” Blake says. “And when 99 percent of your customers can’t attempt to raise funds on nights or weekends because the banks are closed, we knew we needed to change our business to serve the 99 percent.”

So in 2011, Blake made the hard call: FundingUniverse became Lendio. They went from 85 employees to eight and from a million in revenue a month to zero. Overnight.

“I’m sure it took 10 years off my life,” Blake says. “It was painful. But what was I supposed to do? The FundingUniverse business model was broken.”

The first three years of Lendio consisted of Blake and his team honing the business model, getting lenders on board, and nailing the customer experience. The goal? Help small businesses get loans. And fast.

“We have literally made every mistake in the book, but we have fought every moment to live every day,” Blake says.

In 2014, the hard work clicked and the company took off. Today, Lendio has facilitated nearly $2 billion in financing through more than 100,000 loans. They have 75+ lenders in their network. Their small business clients have generated an estimated $6.5 billion in economic output and created nearly 45,000 jobs nationwide. And as for that customer experience? Nailed it.

The initial online loan application takes 15 minutes to fill out. Through Lendio’s proprietary algorithm, that one application gives the entrepreneur access to multiple loan options from a nationwide network (i.e. you pick which loan you like best). What’s more, entrepreneurs can often access cash in as little as 24 hours after their loan approval.

“We are fueling the American dream,” Blake says. “It’s the core of who we are, and it’s why we’ve grown. Period.”

The Lehi company is now 310 employees strong — and growing. They hired 160 this past year, and they intend to hire 200 additional team members in 2020. (Fun fact: The week Lendio moved from South Jordan to Lehi, the number of job applicants doubled.)

“When we first started out, I felt like I had the secret to success. I could see myself riding off into the sunset in a Lamborghini,” Blake says. “But all of that was short-term thinking. I’ve had a complete change of heart and mindset. I am not in this business to sell it. I want to build a 100-year business that outlasts me. Lendio is about something so much bigger than Brock Blake.”

And the student becomes the master.

Mother Of All Examples

“My mom just recently passed, and I can’t overstate the influence she had in my life. She came from nothing. Her dad was an alcoholic, and her mom was a single mom who made minimum wage. My mother worked from the time she was 12, she made her own prom dress, she was a cheerleader, she was a student body officer, and she overcame every obstacle thrown at her. Any success I have had is because my mom taught me how to work. She taught me that success isn’t about me — it’s about the people you surround yourself with. There are six of us kids, and four of us are either the CEO or president of our companies. We’re all just trying to live up to her legacy. All we want to do is make her proud.”