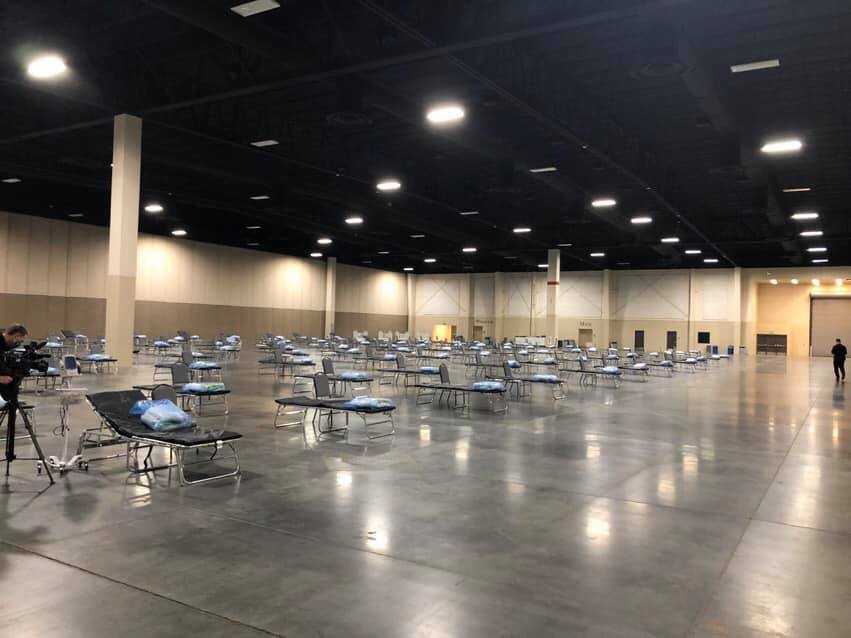 Plans are in motion and the right hands are on the wheel. Today, the cogs kept moving forward while the state maintained social distancing under Governor Herbert’s directive. He didn’t speak at the daily press briefing, perhaps because he felt he was being repetitive (something he mentioned at the past two daily press conferences). Utah logged five new deaths over the weekend, with four of them being at long-term care facilities. Here’s what’s new in Utah vs. Corona today …

Utah releases its data every day at 1 p.m., and today’s updated chart shows 1,675 total cases of COVID-19. This was an increase of 70 in the past 24 hours. The total number tested is 33,394, which is an increase of about 2,500 tests in a one-day period. Surprisingly (and thankfully) Utah is still holding steady at 5 percent of tests coming back positive — and less than 10 percent needing hospitalization For more info, visit www.coronavirus.utah.gov.  Note: The number of “Hospitalizations” reflects the total hospitalized throughout the outbreak and not the current number of COVID-19 patients in the hospital.

Utah’s death count bumped up to 13, with five new deaths over the weekend. Two of the deaths were residents of a long-term care facility in Utah County — and one additional resident also tested positive in the facility. Two of the other deaths were at a long-term care facility in Salt Lake City, where an additional 23 residents tested positive, as well as 2 staff members. Ten residents at this Salt Lake facility tested negative, and they’ve been transported to a new facility. The fifth death on Saturday was “an older adult in Salt Lake City, less than 60 years old, with underlying medical conditions” who passed away while hospitalized. Because of privacy laws and other reasons, it’s been tricky to get more information on deaths, but it does appear most of the deaths in Utah have been older adults with underlying medical conditions.

Governor Herbert is holding strong to his Stay-At Home Directive (less strict than a Stay-At-Home ORDER), although we’re one of only 9 states left in the country without a legally enforceable “order.” The current directive (discussed in my previous updates) asks Utahns to choose to stay at home except for essential reasons such as food and medical needs. If you want to hear both sides of this issue, hop on your favorite social media app and prepare to go down a rabbit hole. NOTE: The governor allows each jurisdiction to add stricter orders if needed. Salt Lake County has been under a Stay-At-Home ORDER for 8 days. Utah County has not issued a Stay-At-Home ORDER, but is instead abiding by the Stay at Home DIRECTIVE given by the governor. The Salt Lake City and Salt Lake County mayors have asked Governor Herbert to issue a state-wide ORDER, partially because they feel their medical facilities will bear the brunt of statewide needs over time.

Utah currently has the capacity to test 4,000 to 4,500 per day, but we haven’t reached our daily capacity yet. If you listen to the press conferences and conference calls, it seems as if tests are readily available for anyone who wants to be tested — but it is clear anecdotally that this still isn’t the case. Multiple people who have symptoms have reached out to me or asked questions on the daily calls about why it’s so hard to qualify to be tested. I do believe this will not be the case in the coming days. Dr. Angela Dunn, state epidemiologist, said the state is beginning to see a shortage of swabs needed to conduct the tests. “Just when we make progress on the testing capacity, then we have to focus on our supply capacity,” Dr. Dunn said. At the current rate, we have enough testing supplies to last about one week, but orders are in the works and more supplies should be here before we run out. Dr. Dunn re-emphasized that they prefer testing people with symptoms. “If we test asymptomatic people, the reliability starts to decrease and the rate of false negatives goes up,” she said.

We’re the fifth best state in the nation in the number of tests per capita. Check out the dashboard here for more details. https://www.worldometers.info/coronavirus/country/us/…

One of the most promising developments is antibody tests. When we survive any virus — including COVID-19 — our bodies build up antibodies. The Red Cross is looking for those who’ve recovered from COVID-19 to donate serum that could be used as treatment. Visit https://www.redcross.org for information. In addition, the state and the nation are focused on studying and acquiring antibody tests. Watch for more on this topic in the coming days, especially since Utah has a large order of antibody tests due to arrive within a week. Silicon Slopes powerhouse Carine Clark said, “Imagine a world where we could give every person an antibody test, and with three drops of blood we could tell if they had the antibody and could go back to work. This would be a huge deal.”

So far, the much-heralded Paycheck Protection Program has been a pile of frustration. Local lenders scrambled to get their application process setup after the federal government was slow to get them the details. And then business owners hit refresh again and again on the bank’s websites. The CARES Act is the largest stimulus package in the history of the United States, so perhaps we shouldn’t be surprised that it hasn’t rolled out smoothly in the first three days. Utah’s Lendio has been taking loan applications for three days but now they are waiting for banks to be ready to accept their applications. (Think of Lendio as the Expedia of business loans — they connect borrowers to lenders). Brock Blake, CEO of Lendio, says he has $10 billion in applications in hand but is seeing a significant backlog in processing through the banks and the SBA. The feds have allocated $350 billion for this nationwide program, so the fact that Lendio is handling applications for $10 billion of that is significant. And cool. And slightly worrisome that the country truly has enough money for all the demand by small business owners. For advice on accessing the state and federal stimulus packages, the state is offering this hotline: 385-468-4011.

Most models are now predicting that Utah DOES have enough healthcare capacity to handle the expected peak of cases (likely late April), but Utah wants to be prepared. To this end, an off-site hospital has been setup in the Mountain America Expo Center in Sandy. There are 250 simple beds setup and ready, with room for an additional 750 beds if needed. Should this temporary hospital be put to use, the COVID-19 patients would stay at the traditional hospital, while lower-risk patients would be moved to the makeshift facility.

Dave Elkington, co-founder of Inside Sales — now Xant, said, “Let’s get back to showering every day and being human beings.” He and the other ambitious brains at Silicon Slopes launched www.TestUtah.com last Thursday, which is the largest health assessment done in Utah that also aligns those needing a COVID-19 test with an appointment at a mobile location to get a free test. The information gained from the assessments will inform the state on hotspots, clusters, and need for the next 10-15 mobile testing stations. If you want to get the word out, TestUtah is encouraging us to do a short video about why testing is important and what normal life means to us, and then post it on social media and tag 5 people. Notable people who’ve done this so far include Coach Kalani Sitake and golfer Tony Finau. A new functionality of the www.TestUtah.com site will include a daily check-in for those who have taken the assessment previously but are willing to come back for a 1-minute health update to share if symptoms have increased. This will be helpful to us as users so we know when we need to be tested — and also for the state as they aggregate info on spread of the virus. They would like every man, woman and child to take the assessment. #familynight

Since the two TestUtah mobile sites were up and running last Thursday, the number of assessments completed is 51,633. The number of people identified as needing a COVID-19 test is 2,023, and 1,564 arrived for their appointment to be tested (some got cold feet?). In addition to the mobile stations at Timpanogos Hospital and Provo Towne Centre, the next mobile site will likely be in Heber and then South Ogden. Washington County will open in the near future. And Salt Lake City Airport is on the docket as well.

TestUtah.com is also getting into the lab game. They just secured a High Throughput lab, which will be able to do 8,000 extractions a day. “We would be considered the highest-throughput infectious disease lab in the country,” Dave Elkington said. “We have wicked smart people volunteering their time to solve this problem.” Once again, Utah is leading out and doing the impossible.

Intermountain has 22 testing sites listed on their website, as well a symptom tracker and other helpful information.

Tech leader Carine Clark, who sits on basically every Taskforce and board associated with COVID-19 in Utah, says we will see a “2.0 version” of the “Utah Leads Together” plan by the end of the month. This will outline how we will move forward into the Stabilization phase. Also, two weeks ago the state announced bridge loans through GOED for $5,000 to $20,000. The state received 2,700 applications last week. Loans will be awarded later this week. Another round of applications will be accepted soon.

Want to help local restaurants and the homeless at the same time? Voila! Check out this cool way to give.
https://www.gofundme.com/f/feed-our-homeless-families-and-f…

This new website aims to help figure out who has been tested for COVID-19 in your neighborhood. Add your data and help this be a more reliable source of info going forward: https://covid19around.web.app

Dr. Greg Heywood Returns to His Native Utah After Decades of Obstetrics and Gynecology Practice in West Virginia Previous post 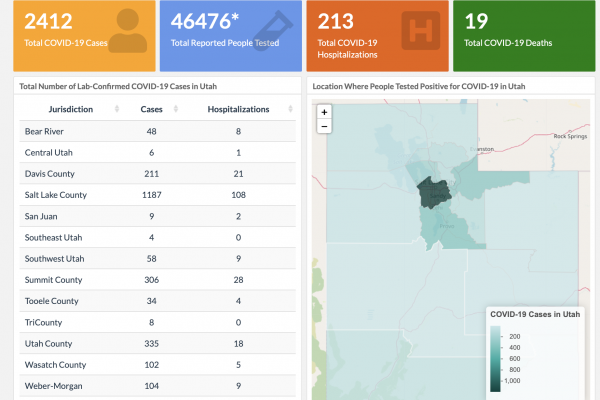