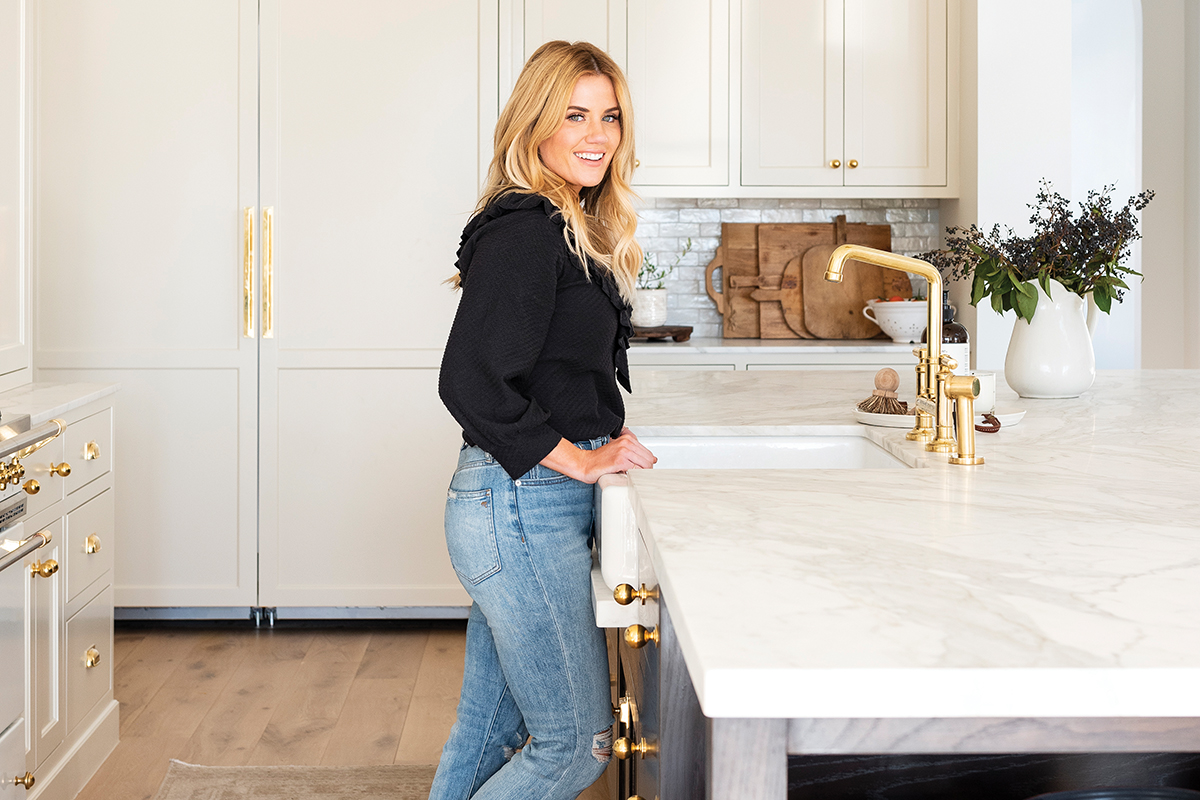 NAME BRAND. Marketing 101 (and 909) will tell you that a brand should have a personality. And when the founder IS that personality, the correspondence should reflect that vibe. That’s Marketing 202. But that’s not easy when you don’t have enough thumbs to answer all the messages. “We respond to hundreds and even thousands of DMs per day,” says Shea McGee, founder of Studio McGee and McGee & Co. “I didn’t have faith at first that it was possible to trust other people to have my voice. So we developed a style guide of how to communicate, which includes plenty of exclamation marks and heart eyes. I want my team to say, ‘The paint color is White Dove! Thanks for asking!’ Sometimes if you use a period, it sounds like you’re being short with people.” Photo Courtesy Studio McGee.

When Shea McGee graduated with a degree in public relations, she was trained in press releases, press conferences and corporate style guides. And a few years later when she graduated to entrepreneurship, she re-trained herself and her staff on what branding looks like in an Insta-world. Now she is the architect of interior design in the social media era.

Just before this interview with BusinessQ, McGee filmed a webisode inside her new home and coordinated product development conversations, which she documented on Instastories for her 1 million followers.

All the heart eyes!

McGee embraced design and then technology, and her followers have embraced her as she has taught them what she’s learning.

“The old school model of design was very corporate, and nobody would say anything specific about what they were doing,” McGee says. “We decided to teach along the way and share what we were doing, which helped establish ourselves as experts. So even though I was relatively new at the game, I was teaching what I was learning and that developed into a following of other learners.”

Studio McGee, which is an interior design firm with beautiful squares on the Gram, draws in homeowners, designers and dreamers who screenshot and save photos for inspiration. McGee & Co. is the products division of the company, which McGee envisioned from the start.

“The furniture industry was a little behind in trusting the internet,” she says. “The manufacturers initially didn’t believe I could market and sell without going through the traditional brick-and-mortar and catalog process. But when people see beautifully styled products online, they want to buy them. And I want to make it easy for them.”

The rules of design and of marketing have both been thrown out the trendy black-framed window, largely because McGee has led the way in what has traditionally been a traditional business model.

“When I first started, we posted a lot of behind-the-scenes photos on our feed — and blogs were still used as blogs,” McGee says. “Now our feeds are more polished, like a portfolio. The social media landscape has changed everything. In fact, people look at our feed to see if they want to hire us more than they look at our actual portfolio.”

The behind-the-scenes scene is as important as ever, but the Instastory is the home for the quick videos and less-than-polished pics.

“We are posting throughout the day to foster constant engagement and to build a community,” McGee says.

And although the social media tools have changed, McGee’s vision has been timeless.

“My vision has always been to connect with the audience and to make high-end design feel approachable,” McGee says.

Her 2020 vision involves plenty of video to play, pause and repeat.

“When we started, we were very photo-focused, but now video is a huge component of what we do both on YouTube, our blog and our Stories. We’ve incorporated more capabilities into what we do, and it helps people stay connected,” she says.

“We can usually tell pretty quickly which products are connecting because we have the sales numbers to show us,” McGee says. “I can direct where people’s interests lie and what products they will get excited about by styling them in a space instead of on a white background. People want to see how products live inside a home. And that’s what we do.”

“I fell in love with light fixtures that I bought for my kitchen. I wanted to carry the fixture in our store McGee & Co., but the manufacturer stopped making them due to low demand. I told the company I had styled it beautifully and knew that it would sell. I convinced them to manufacture a container just for us. It was a big risk on our end, but we sold out of the item completely and the fixture is on backorder. When homeowners see an item in a space, it speaks to them. Items on a white background just don’t sell as well anymore.”