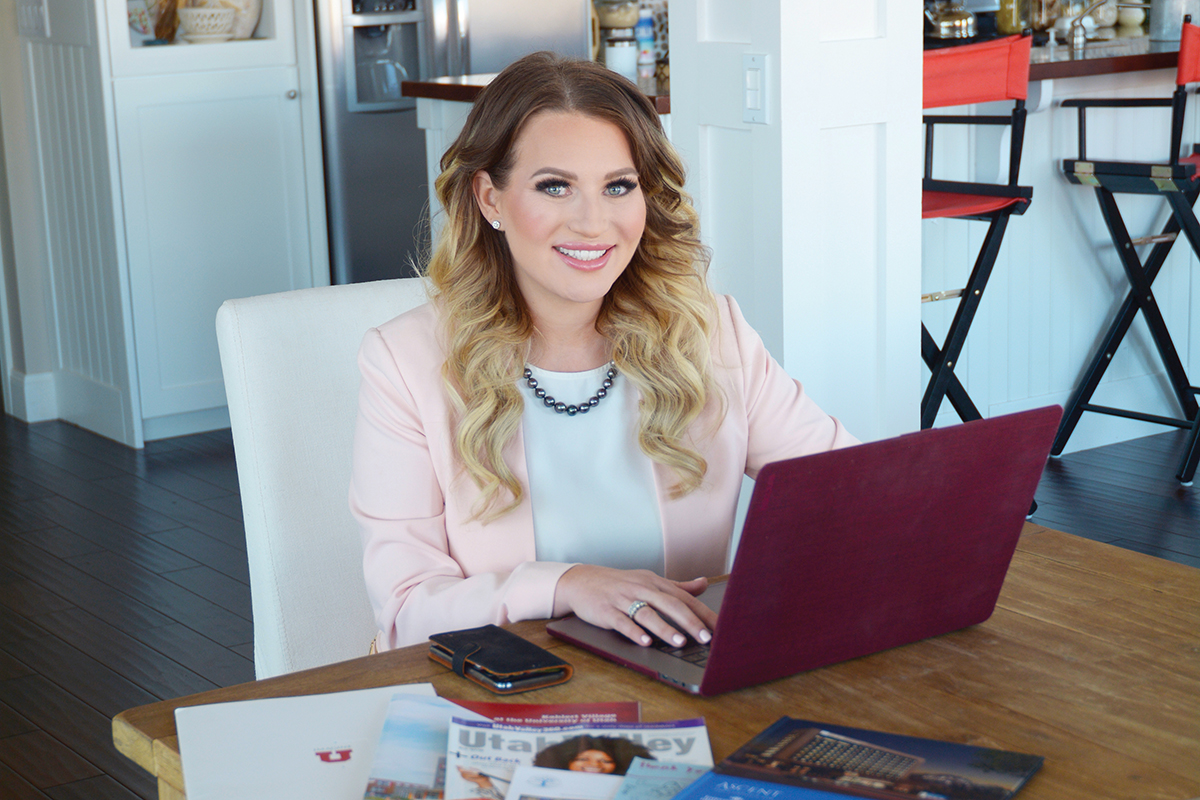 GRANTING TIME When Heather Kahlert first entered the philanthropic scene through her $3 million donation to the Utah Valley Hospital four years ago, she started getting calls. And texts. And requests. And a full calendar. “I had to create systems and boundaries so I could leverage my time in the best way possible,” she says. While she does utilize the “go with my gut” philosophy, she also has a process. One of her policies is to donate to an organization for two years and then take a year off. “Even for the best organizations, this promotes self-sufficiency and decreases dependency. It can be difficult to tell people no, but I always tell them to reapply next year and I’ll take a look at it,” she says.

Heather Kahlert was five minutes late to this photo shoot because she was signing a check for $125,000 for UVU’s Women’s Success Center. (Worth her wait in gold.) This type of scene has generously played out again and again the past five years, as Kahlert has been leading operations and grant-making for the Kahlert Foundation in Utah. As a mother of three and a resident of Utah for the past 17 years, Kahlert has worked with more than 100 organizations across the state as she has become the most photographed philanthropist on the Wasatch Front.

The Kahlert Foundation was initially incorporated by her grandfather in 1991 — before the young Kahlert graduated from high school.

When her entrepreneurial grandfather passed away in 2011 after a lucrative career in the HVAC/industrial refrigeration industry, he left his fortune to the foundation. And that’s when the joyous work began to determine the most fulfilling ways of fulfilling grandpa’s desires to bless the world.

The Kahlert Foundation operates in Maryland and Utah, with two generations of family overseeing the management and distribution of funds.

“I work hard to maximize my gifts,” she says. “Many of my grants are done over years, and I’m always looking for the best ways to help this state and its amazing people and programs.”

One of Kahlert’s largest donations to date is constructing the largest building to date on the University of Utah campus. The Kahlert Initiative for Technology will be 370,000 square feet dedicated to elevating digital technology education.

One of Kahlert’s gifts — of the non-financial variety — is rallying the philanthropic troops. Gail Miller and Patricia Child have also come on board to fulfill Kahlert’s dream of having all the naming rights for this U of U project be given by women.

While Kahlert is perhaps most well-known for the digits she gives, it’s her research before the dollar signs that sets her apart. Before she donated $5 million to bring Primary Children’s Hospital to Utah County, she spent years on the board as a feasibility study was completed.

“I was in the depths of research the whole time,” Kahlert says. “We had to make sure the overall vision and plan was sound before coming forward with a donation.”

Kahlert doesn’t look like a typical philanthropist in terms of her age, gender, personality or questions she asks.

“I’m a disruptor. I change how people look at things,” Kahlert says. “I’m aware of where the economy is moving, and I want to help solve problems created as we grow in this state. As a mother, I see things differently than my older male counterparts. We all bring our perspectives and it helps inform the board and the organization as a whole.”

With Kahlert’s reputation and history of check-writing, there is no shortage of people who want “10 minutes of her time.” She’s developed systems and processes so she can leverage her time — and money — in the most efficient way possible.

“I want to make the most impact and the biggest ripple with my choices,” she says.

Kahlert’s job may look glamorous to an outside observer — and she does have plenty of chances for gowns and heels.

“But what people don’t know is I’ve been up since 4 a.m. hashing through Intermountain’s 990s for the past four years,” she says. “I need to know the numbers of the organizations I’m working with.”

One number to know is that the Kahlert Foundation is our No. 1 Contributor of the Year.

And you can take that to the bank.

Someone’s Gotta Give: Kahlert Has Become The State’s Foundation

Server Up and Running

“Philanthropy can feel administrative with zeros flying everywhere. We talk about systems, plans and progression. One of the things that helps me is volunteering with the organizations I partner with. I like to make meals at the Ronald McDonald house. I distribute cookies and peanut butter sandwiches at The Road Home. I like to talk to the kids at Make-A-Wish.  I want to meet families who benefit from the Women’s Success Center. This reminds me to push for something better. Without that human touch, it’s easy to get lost in the process.”