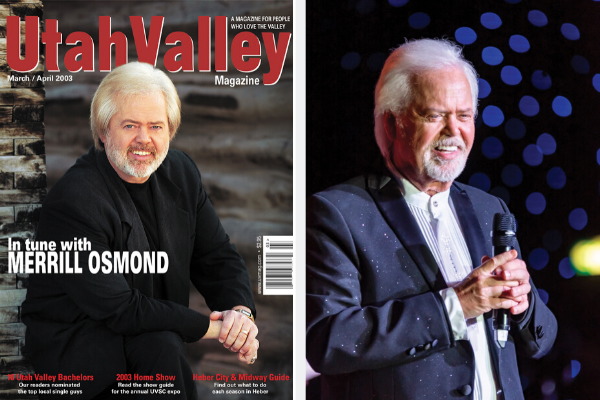 Merrill Osmond was photographed near his Ephraim home for our March/April 2003 cover of Utah Valley Magazine. Seventeen years later, he still keeps a full performance schedule.

Utah Valley Magazine: What do you want to say to the Merrill Osmond you see on that 2003 cover?

Merrill Osmond: I want to tell him it’s going to be OK and that he’ll get through it.

UV: You were about to turn 50 and become a grandfather when I interviewed you last. How did that go?

Merrill: I have 15 wonderful grandchildren. I want to stay home more and be grandpa. We moved to St. George about four years ago, and we’re loving it.

UV: What do your grandkids call you?

Merrill: Most of them just call me Grandpa but one of them calls me Gramps, which I think is cute.

UV: How do you stay close with family with your schedule and scattered geography?

Merrill: We talk on Marco Polo every night.

UV: What heartaches have you experienced in the past 17 years?

Merrill: I lost one of my sons to a heart attack, and that took a toll on me.

Merrill: I’m leaving for England this weekend for another tour. If you’d told me 20 years ago that I’d still be doing the same things, I would have said you were nuts. But the fans are still demanding more.

UV: How has touring changed for you?

Merrill: It used to be Osmond Brothers. Now it’s Brother Osmond. I’m the last one still regularly performing other than Donny and Marie.

UV: In our last interview, you talked of your friendship with Jermaine Jackson. Are you still close?

Merrill: We’re still good friends, but we haven’t done the duet we want to do.

UV: Your vulnerable book “Let The Reason Be Love” had just come out in 2003. How did people react?

Merrill: We’re on our fourth printing now. I’ve added a few stories because many of my corporate clients want me to speak more about celebrities I’ve known.

UV: Do you still keep a regular journal?

Merrill: I write almost daily with pen and paper.

UV: What role have your journals played?

Merrill: As I look back at some of the decisions I’ve made, I would never make those decisions today. I wasn’t thinking straight because of depression and anxiety. But we have to go through our “stuff” to appreciate the good things of the world.

UV: Do you still believe in the life philosophy that progress is more important than perfection?

Merrill: Absolutely. I was raised by a perfectionist father, and we were known as the one-take Osmonds. That really took me down. I had to learn we can’t be perfect.

UV: You also taught me the life philosophy that achievement doesn’t come without stumbling. Still true?

Merrill: In my case, I thought I had failed completely, but I was learning how to do things better. We’ve got to make mistakes in order to learn.

UV: What stage of life are you in now?

Merrill:I’m at peace, especially with my faith. There’s a large number of people who wouldn’t have known about The Church of Jesus Christ of Latter-day Saints if it weren’t for the Osmonds. That is the most glorious thing.

UV: What are some of your projects this year?

Merrill: I’ve got a new book coming out, and I’m writing a new CD with brand new songs.

UV: How do you keep yourself mentally and physically healthy for your full schedule?

Merrill: Doctors have tried to medicate me for anxiety and depression. But nothing has worked except for fishing and camping. I walk. I eat better. And I read.

UV: What song will you never get tired of singing?

Merrill: That would be “Love Me For A Reason.” But “Crazy Horses” is the song that gets the crowd going!

UV: What would you like Utah Valley Magazine readers to know?

MerrillI am humbled by anyone who bought a record or came to a concert. I know people have prayed for me. I’m incredibly grateful. I love interacting on Facebook, Twitter and Instagram, and you can always find me at merrillosmond.com.

Let's Talk About The Elephant & Donkey In The Room Next post