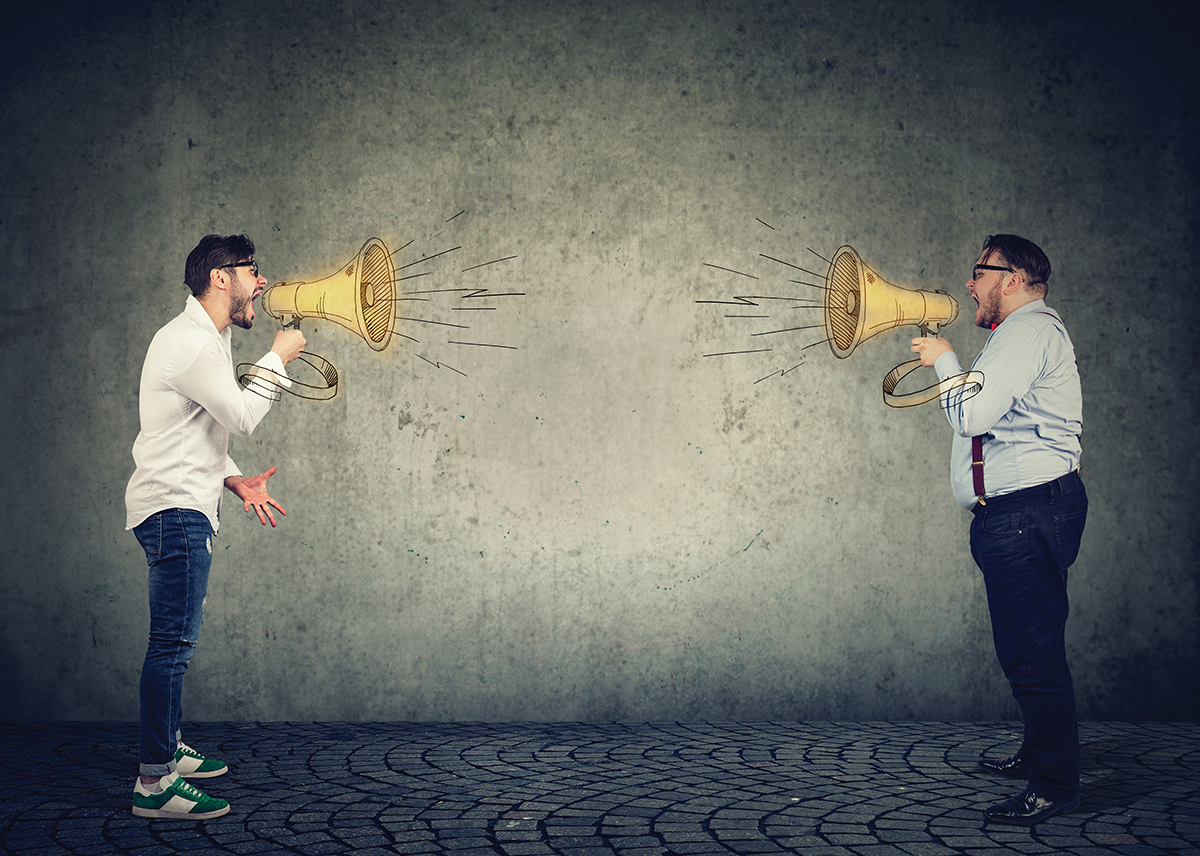 Seventy-one percent of people say a political discussion has hurt a relationship, according to a new study from Provo-based VitalSmarts. (That’s up from 42 percent back in 2016, by the way.) Within that 71 percent, 23 percent say the relationship has never recovered. And if those stats weren’t staggering enough, some respondents reported they left a job, moved homes, or even got a divorce as a result of a political discussion.

With what’s sure to be a divisive presidential election this November, break rooms and office chit chat will undoubtedly brim with political memes and moments — especially with this alarming trend of trash-talking politics among co-workers and friends.

But it doesn’t have to be this way! Flip the page and flip the trends with these 8 tips for having a healthy political discussion at work.

We get it. Truly.

When it comes to politics, emotions are high. It doesn’t matter what side of the aisle you are on — there are varying ideals, viewpoints, and just downright disagreements everywhere you go.

Disagreements are A-OK — even necessary for a robust dialogue. But if you’re going to have political conversations with your coworkers, it’s imperative to figure out how to make them healthy instead of harmful.

“Even if you agree with people but you do so in a way that is defensive, posturing or aggressive, it decreases the likelihood they’ll respect you or that the outcome will be amiable,” says Joseph Grenny, co-founder of VitalSmarts and co-author of the New York Times bestselling book Crucial Conversations. “However, if you can express your opinion skillfully you can associate with anyone. Ultimately, the key to successful dialogue is to make it safe for others to not only hear you, but to share their own ideas.”

Here are 8 takeaway tips for your political office chatter from the experts at VitalSmarts.

“Most people go wrong in political conversations before they even open their mouths,” says Justin Hale, a master trainer at VitalSmarts. “Is your motive to prove someone wrong? Is it to convince them of your opinion? Well, then you’re in for a hard road.”

Question: How often do you think a political discussion ends with someone saying, “I was wrong. You were right!”

“It just doesn’t happen,” Hale says. “Your motive will determine the success of the conversation. Don’t engage until you have your motive right.”

“People are stronger when they can understand without feeling like they have to agree,” Hale says. “And that’s where motive comes into play. If your motive is to learn, you’re already a step ahead.”

To inspire that understanding, Grenny suggests framing your conversation as a chance to learn from each other rather than to change each other’s minds.

“Simply being curious about another’s position is sufficient motivation to engage,” Grenny says. “But, if you harbor a hope of converting the other person you’ll be tempted to become manipulative or coercive.”

3. LIMIT YOUR INTENT + ASK FOR PERMISSION

“Explain that you aren’t trying to change the person’s mind or attack their position,” Grenny says. “Then ask for permission to talk about the sensitive topic.”

“Respect is like air, if you take it away, it’s all people can think about,” Grenny says. “Others will not engage with you if they don’t feel respected by you. Set the stage by over-communicating your respect for the other person and his or her opinion.”

Political talk loves it some labels. Be careful.

“Don’t put people in boxes — it’s an immediate turnoff,” Hale says. “Remember that each individual is a human with a name and individual perspective.”

What’s more, let’s limit the baseless accusations, shall we?

“We see it all the time. If someone doesn’t support a prop or initiative you’re in favor of, it’s easy to say things like: ‘Well, you must not care about the children!’” Hale says. “Of course everyone cares about the children. We all just have different ideas of what that looks like. Labeling someone with extremes is the fastest way to doom your conversation.”

Unpopular opinion: Y’all are masquerading your opinions as facts!

“People are so bad at this,” Hale says. “They typically share their opinions as facts, which immediately puts people on the defensive. You’ll have much better success if you start with observable, measurable facts from reputable sources — and then share your opinion about those facts. Start with something you can agree on, then proceed to your opinions.”

Newsflash: If you’re staring your sentence with “The fact of the matter is,” you’re doing it wrong.

Let’s all say it together: We are more alike than we are different.

“People have way more in common than they let on. I truly believe that,” Hale says. “Let’s look for ways we are similar and where we agree.”

If or when the conversation takes a more dramatic turn, Grenny says to look for the greater principle governing both opinions.

“You’ll likely find a mutual purpose behind your convictions,” he says.

Dialogue suggestions to get you started:

There is nothing shameful about exiting a conversation to defuse these hot topics.

“Be aware of when a conversation goes from casual to combative,” Hale says. “Two rational people can become irrational quite easily. Stay level headed and know when to exit a conversation.”

It’s also OK to sit conversations out if you don’t feel like you have the right tools or state of mind to make it through respectfully.

“If you don’t feel skilled enough to have the debate in a respectful way, think about sitting the discussion out,” Hale says. “If you’re not prepared, there’s too much at risk.”