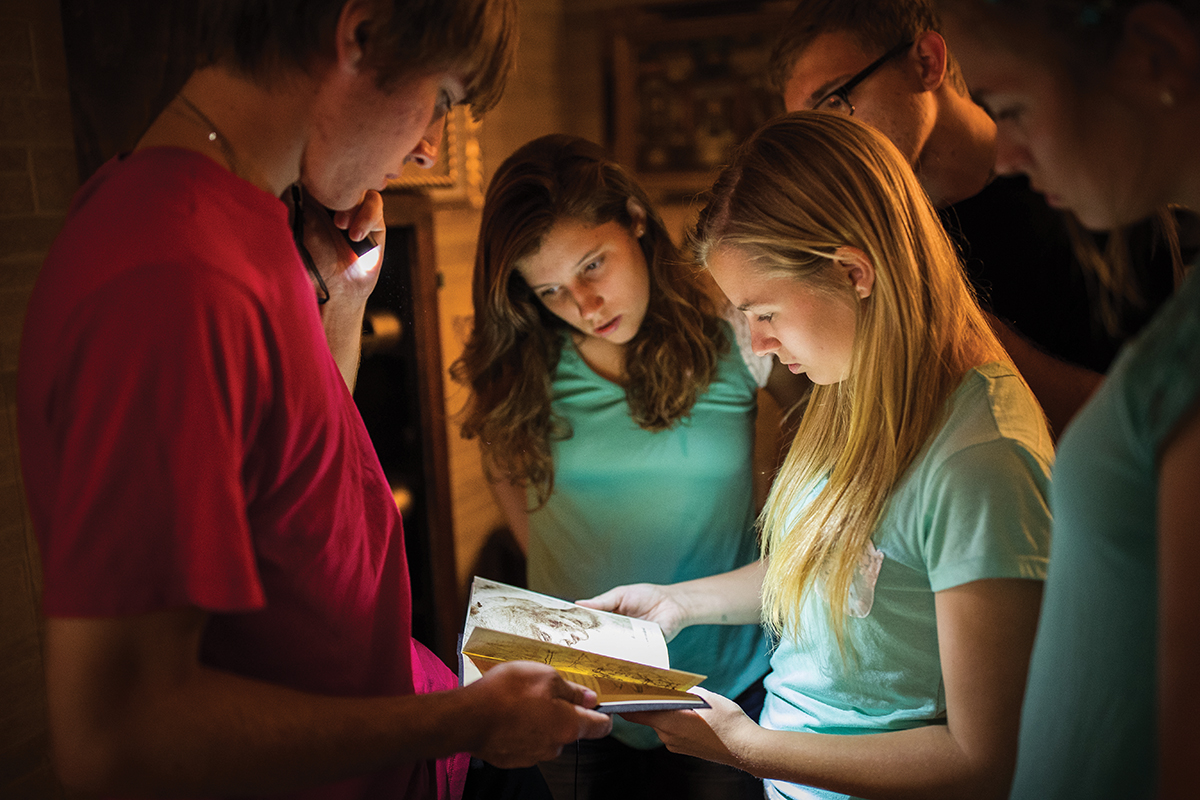 Unlike most escape rooms, Escapes In Time lets visitors tour the rooms before committing to solve the puzzle. Escapes in Time has six rooms, including Leonardo’s Loot, pictured here.

A group of people enter a room rigged with puzzles that must be solved within an hour.

While there is one right way to escape this room, there were limitless ways to design the experience. The possibilities of themes, story lines, and puzzles are as wide as the imagination and as broad as the tech available.

The owner of Escapes in Time and the owner of Red Giant Escape Rooms both taught themselves how to conceptualize these 3-D challenges into one cohesive experience.

When Marilyn Momeny opened Escapes in Time in 2016 with her husband, Lyman, there were only three other escape room establishments in Utah.

After hours of research, attending a conference in St. Lewis and cracking the code at dozens of other escape rooms, Marilyn knew she didn’t want to play games with her guests at her Orem location. She wanted to provide them ample tools to get out. So, each session at one of the six rooms is monitored by a game master.

Josh Larsen opened Red Giant Escape Rooms in Orem in May 2018 with just one room. Since then, he’s opened a total of four rooms.

Josh has developed each room under the philosophy of “push the envelope” and “give them their money’s worth.” CO2 shooters? Why not? Bubbles? Of course! He toyed with implementing flames, but decided to not chance the fire hazard.

Building the room is the biggest puzzle of all, predicting how other people solve puzzles and hitting the difficulty sweet spot. Josh builds his puzzles so guests are forced to work together.

“You cannot beat the room unless you talk about it with each other,” he says. “When teams come out of the room they’re laughing and cheering together.”

Josh likes his escape rooms to be spacious and completely immersive, with a devilish attention to details. He always writes a live actor into the room’s story to heighten the experience and includes tech that creates “wow moments.”

Marilyn says a great escape room doesn’t follow a linear puzzle model. She builds her rooms so the puzzles can be solved in any order until they combine into one puzzle at the climax of the experience. It’s called a metapuzzle.

“I think the puzzles have to be solvable so that a reasonable person could solve them. They don’t use a trigonometric equation — because most people can’t do that — or draw on an obscure piece of knowledge that you have to look up online. It needs to use general knowledge,” she says.

When Marilyn first tested the waters of her new business, demographic reports predicted her biggest audience would be students, so she stationed it between BYU and UVU.

But as she started to host customers, mostly families came through the doors.

So she pivoted. Marketing and branding now focus on bringing in families.

Even though he earned a bachelor’s degree in international business, Josh dislikes the term “target market” in this business scenario because he’s observed that the escape room experience attracts almost every market and demographic: 8-year-old birthday parties, teenagers on dates, college students looking for an adventure, company parties, family outings, and sports teams wanting to fine tune teamwork in a surprising way.

“Most people are very competitive. We’ve had all kinds of people come do a room, and as soon as you put them in — for 99 percent of people — that competitive side comes out. They aren’t thinking about anything but solving it and getting out,” Josh says.

6 Ways to Stay Slim Without a Gym Previous post