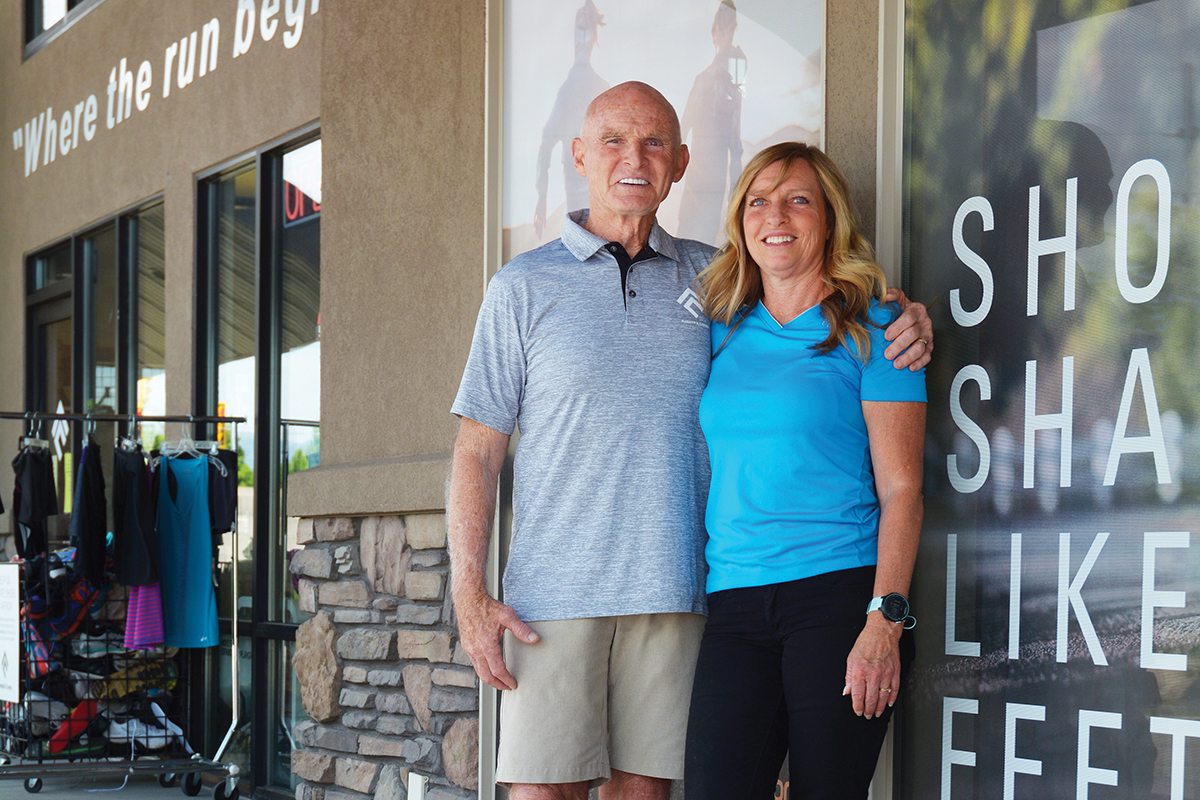 For Hawk and Cheryl Harper, owning Runner’s Corner has become a marathon of business ventures — with a nearly 30-year course filled with moments of trial followed by breakthrough, some heavy doses of endurance, and a whole lot of heart.

In 1991, some runners from Sojourners Running Club banded together to open a small running equipment shop in a co-op space near BYU campus. Each person contributed $500 and one day a week of work to jump start the business.

In the first four years, most of the partners walked away, leaving the Harpers as the sole owners. The store moved to Orem ­— and Hawk and Cheryl planned to get out too, and they had a buyer lined up.

But the sale fell through. So they decided to give it another try. But not without trial — for the next eight years, debts accumulated and the books never transitioned from red to black. They hired part-time managers, but one thing became obvious.

“We noticed when Cheryl or I were there, our sales were higher. If you love something, people can feel that,” Hawk says.

Around the same time, a customer who’d grown into a friend offered to become a benefactor. He replenished their bank account, which gave the business the financial fuel to get ahead.

From there, Hawk and Cheryl developed the habit of paying bills early, getting discounts on products and avoiding late fees. They also created a savings reserve.

“That’s what allowed us to survive this economic downturn,” Hawk says. “We’re blessed when we are prepared. It’s the same with the gospel and business and marriage — start with a great foundation.”

In 2016, Runner’s Corner was named among the 50 Best Running Stores in America by “Competitor Magazine.” They received a perfect score in the secret shopper test, ranking them the top runner’s store in the nation for customer service. That title means more to the Harpers than any other award. (And this family-owned shop has won first for Best Runner’s Store in our contest six years running.)

Serving the customer means everything.

“We don’t sell the way they do at the mall or other places. We learn about the person and their needs. Then we advise them on what works for them and their feet,” Cheryl says. “We want people to leave with more than a pair of shoes or a nutrition product. We hope they leave with knowledge and motivation or hope that they’re going to succeed in their goal.”

A part of that excellent customer experience is offering a free gait analysis to anyone who steps in the shop. The two still take shifts at the store and hire staff who keep that customer service bar high.

“We hire good people who are also good runners. That’s a key for everything, having good people surrounding you,” Hawk says. “I believe runners are some of the greatest people in the world.”