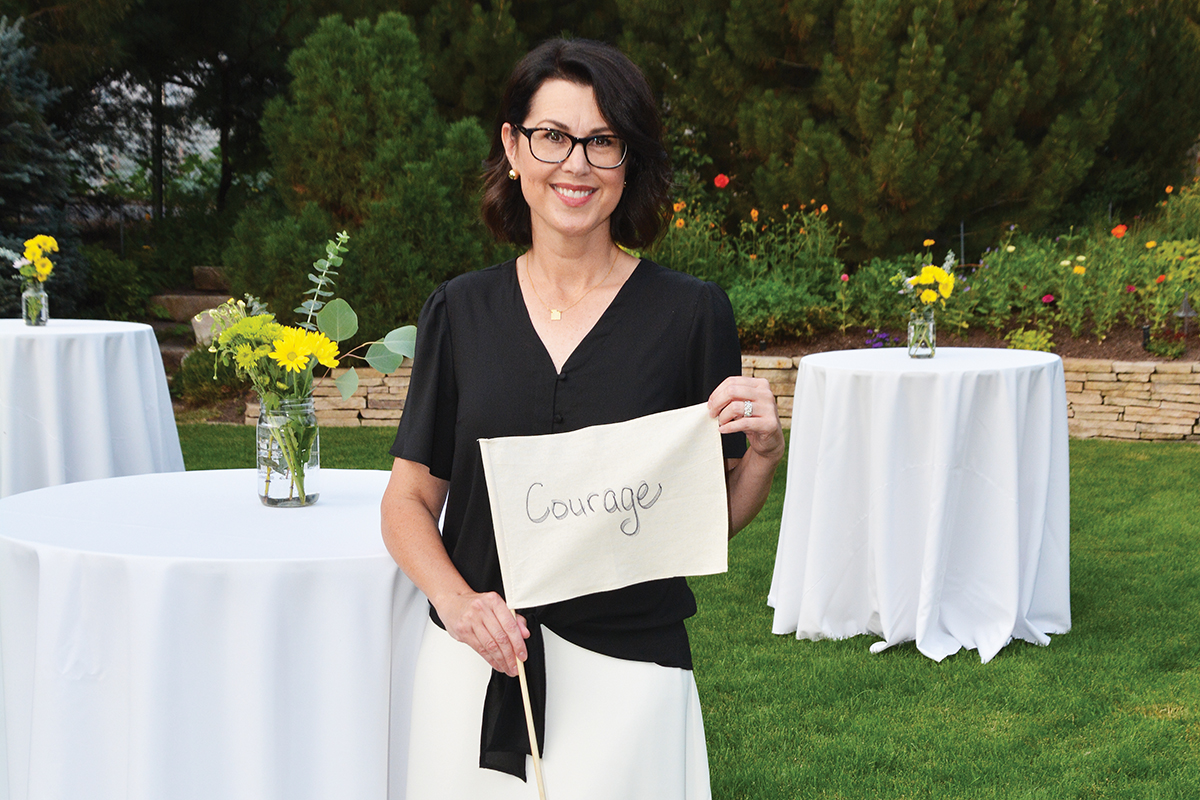 Deidre Henderson flew the banner of “Courage” for our Utah Valley Magazine photographer at the victory party for the Cox-Henderson ticket in Utah’s race for governor. The celebration of winning the Republican Primary was decorated in the campaign colors of green and yellow — a subtle reference to Spencer Cox’s farming background and homegrown campaign.

When Deidre Henderson finished her eighth session as a state senator representing Spanish Fork, she filed to run again for a third term. But within hours, Spencer and Abby Cox invited Deidre and her husband, Gabe, to visit them in Fairview — but they didn’t want the Hendersons to help them move pipe or take selfies with farm animals.

This was a life-changing conversation that led Deidre to end her successful career as one of the state’s most conservative senators and join his ticket as a candidate for Lieutenant Governor.

“I couldn’t do both — I couldn’t run for my seat and with him,” she says. “It was a tough decision. I have loved my time in the state senate.”

This decision was risky — it could have led to no position at all depending on how the votes landed when mail-in ballots were due on June 30th. Deidre and Spencer were running against Jon Huntsman — who Spencer likes to say “has literally had this job before!” The election polls were tight and the results couldn’t be confirmed when the Republican primary closed. That night, Spencer and Deidre said hello, thank-you and “cross your fingers” to masked attendees as they entered the Basin Drive-In movie theater in Mt. Pleasant.

“Spencer and I began our friendship when we were both elected to the legislature in 2012 — I was in the Senate and he was in the House of Representatives,” Deidre says. “We spent one session together before he was tapped by Gov. Herbert to be his lieutenant governor, and we’ve interacted since then in these two roles.”

Perhaps the closest they worked together was in 2018 when south Utah County was in flames, and both Deidre and Spencer were there nearly every day showing leadership and compassion. In fact, the video announcing Deidre for his choice as running mate was filmed on the same location where flames had crackled two years ago. From the moment that video aired, Deidre was on board, on the green Cox RV and on the ticket.

Although Deidre is no stranger to campaigning — she’s run two of her own as well as campaigns for Jason Chaffetz — 2020 made it all new again.

“It was hard to get out and engage with people in the same way,” Deidre says. “On a Zoom Town Hall, you can’t read people and you have no idea if you’re actually connecting with them.”

The one similarity to previous campaigns is that Deidre needed two wardrobes — one for the beginning of the campaign and one for the end.

“I always lose 20 pounds by the end because I’m stressed and don’t have time to eat,” she laughs. “It all comes right back when the campaign is over and I can relax enough to eat again.”

Adding to the campaign stress was Deidre’s focus on finishing her BYU history degree. During this year’s special legislative session where they passed dozens of bills and reconfigured the state’s budget, she was also taking finals and writing papers for BYU’s spring term. “That week just about killed me,” she said.

One of the easiest hats Deidre wears right now is mother of five, but “easy” is relative. One of her children returned early in the mass exodus of LDS missionaries in March. That same daughter is getting married this month. (You know it’s been a busy year when planning a wedding is literally a piece of cake.)

The Henderson family put down roots in Spanish Fork 22 years ago when they returned from Gabe’s physical therapy training in North Carolina. Deidre had never been to Spanish, even though she grew up in Salt Lake City and had attended BYU.

“To my surprise when we moved here, I found out our Spanish Fork Cemetery is full of my pioneer ancestors — my family settled Spanish Fork!” she says. “I feel so comfortable here and blessed. We love the people. We love walking to the rodeo. And we love Barry’s Drive Inn on Main Street. This is home.”

Deidre’s new daytime “home” will likely be downtown Salt Lake City as she and Spencer are the expected winners in the November election for Utah’s governor against the Democratic opponent. Which means she would become Utah’s second female lieutenant governor (Olene Walker was first) — a poetic and historic fact for this self-proclaimed “history nerd.”

Deidre’s love of history created a love for visiting state capitol buildings. At the time of our interview, she had been to 29 of the states’ headquarters.

During July, she traveled to nearby states and knocked a couple more off her bucket list.

“My children are long-suffering with this goal of mine,” she says. “Last year for spring break, my daughter and I saw four capitol buildings in five days. One year we took the kids to Branson, Missouri, and we had to make a four-hour detour to Jefferson City so I could see the capitol building. I love history, and I see so many parallels between events in history to what is happening today. We have to learn from the past.”

Raise Your Voice: Waving the Flag of Civility Next post