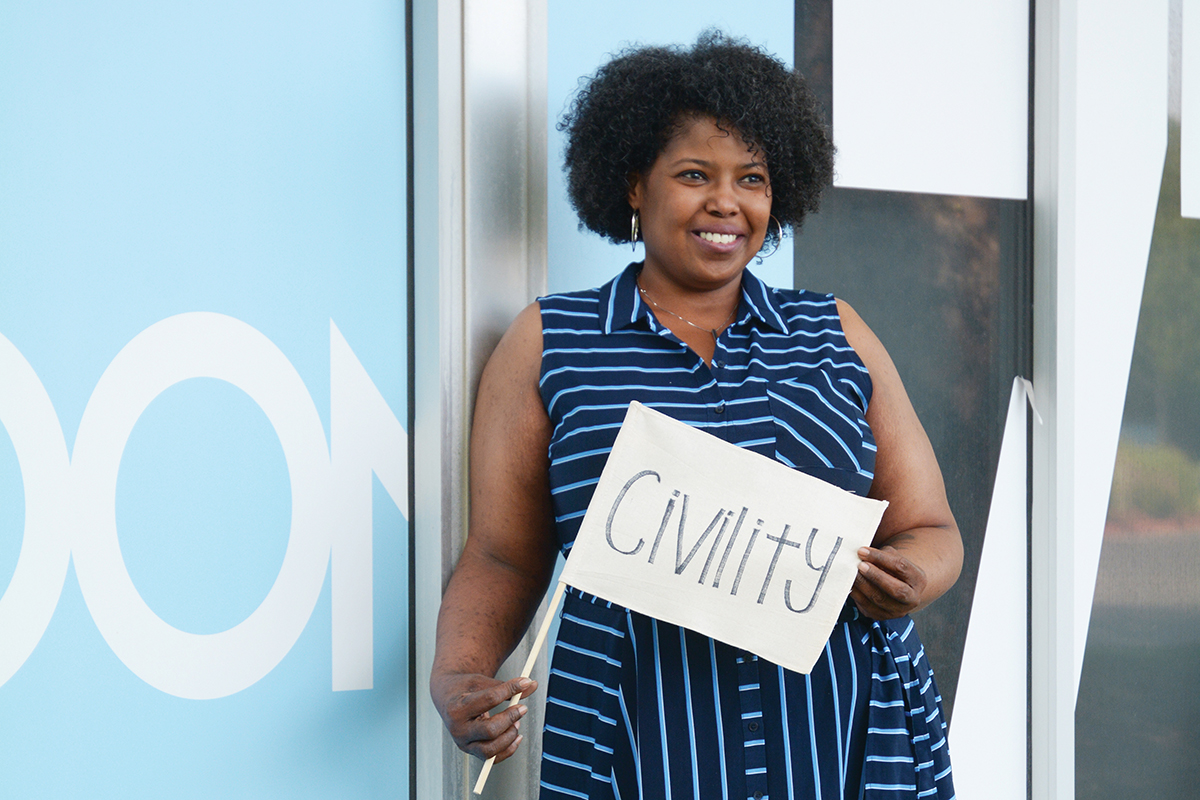 Nikki appreciates that her own goals and values match Domo’s culture. “I feel comfortable being my authentic self when representing the company because it aligns with Domo’s internal culture. It’s beyond diversity and inclusion — it’s all about belonging.”

Over the past few months, Nikki Walker has watched as civil injustice, racism and pandemic have created mounting tension and uncertainty. She’s also pondered on the word “civility,” deciding that civility is the answer to understanding others and solving problems.

“Once people are civil, everything else can fall into place. The opposite of civility is hostility, and that is where we are right now in the world. A tornado of hostility is all around us. Once we can settle down and get to a stable place where we can be civil, people will respect, listen to and empathize with each other,” Nikki says.

Since September 2019, Nikki has been the director of brand experience and community engagement at Domo in American Fork. She’s spent her workdays positioning Domo as a thought leader on diversity and inclusion. When coronavirus arrived, Nikki’s professional focus shifted to how Domo could offer solutions for the community and partnered with the Multicultural Subcommittee of the COVID-19 Community Task Force’s digital equity team. When the death of George Floyd sparked questions about race and necessary cultural changes, Silicon Slopes turned to Nikki as a guiding light.

“I’ve never met a stranger because I don’t anticipate people being evil,” Nikki says. “I anticipate that everybody is good.”

Nikki was raised by a single mother in Jersey City, New Jersey, with her two sisters. She studied in the gifted and talented programs, competed in pageants and started a nonprofit with her sister at age 15.

“We had a normal struggle,” she says. “We lived in a middle class neighborhood, but we were poor. I didn’t know we were poor until I was an adult. The magic that my mom made happen on her paycheck was incredible.”

Jersey City has been ranked as the most diverse city in the nation three of the past four years, which means racism is just not an option.

“I grew up in a space where everybody gets to be treated equally. I never experienced racism in New Jersey. I understood it as a systematic institution, but personally, I had never been attacked with any sort of racist outcries.”

Nikki attended a Jehovah’s Witness congregation where the members refer to individuals as brother or sister and to the collective group as “the friends.”

“That instilled something in me: Regardless if you know them or not, these people are your friends. You all believe in God, and your faith is pulling you together. I’ve always felt like you just got to find the one thing that pulls you together and then you’re friends. Humanity has been that uniting thing for me,” she says.

Then at 40 years old, Nikki left New Jersey for a desk in Silicon Slopes. Despite friends and family members being concerned about her moving to a state where the Black population does not exceed 2 percent, Nikki had no hesitations because she believed — and still does — “people are people, and I can get along with anybody,” she says.

Nikki lives in Lehi with her 22-year-old son, Jacob. Despite her highest hopes, Nikki has experienced racism in Utah: A neighbor let her dogs out when Nikki was having car troubles on the side of the road. An Uber driver called her the N-word and sped away when she tried to enter the car. An employee of a furniture store demanded to see their receipt before letting them leave the store. Negative supermarket encounters are common.

“When I’m in the grocery store, I’m not a leader in the business or civic community. I’m just a Black woman. And when I’m a Black woman in the grocery store with my Black son, it gets super ugly sometimes,” she says. “There have been times where I’ve had to stop and say, ‘Is there something I can help you with?’ because people are standing in one place, following us around the store with their eyes. It’s dehumanizing. It’s infuriating. And it is disappointing every time it happens.”

Nikki is quick to note that although she never experienced racism personally until she lived in Utah, these negative encounters have not consumed her.

“The few bad experiences — while traumatic and impactful — are few and far between,” she says.

“This turning point now in our history is a moment where all Americans are seeing each other and saying, ‘Wow, this is not the same. This is not equal.’ It’s great to have Black voices amplified here in the Utah community and in the national conversation,” Nikki says. “It’s not enough to be not racist. You have to be anti-racist. Being anti-racist involves you actually taking steps to understand what systematic racism is and how it affects people who do not look like you.”

When the death of George Floyd started attracting national attention and raising questions about how racism and violence still permeate American culture, many heads and ears turned toward Nikki Walker, the director of brand experience and community engagement for Domo and an advocate for the Black community in Utah.

“I’m grateful the community looks at me as someone whose opinion they trust and whose insight they look toward,” she says. “I had the opportunity to start talking directly with people in Silicon Slopes in the ‘Amplify’ series. I was able to address the unrest happening in the country, and speak directly to business owners and the business community and say, ‘This is how you can show your support to the Black community.’”

Nikki is grateful that her voice joins with those of other communities, rallying around the cause of diversity and inclusion.

“It’s incredible to watch people who are not Black — people who are white or Hispanic or part of the LGBTQ community or the disability community — coming together and saying, ‘We’re going to help amplify Black voices right now because we want the American dream, where everyone has freedom and everyone should have the same access to the dream.’”