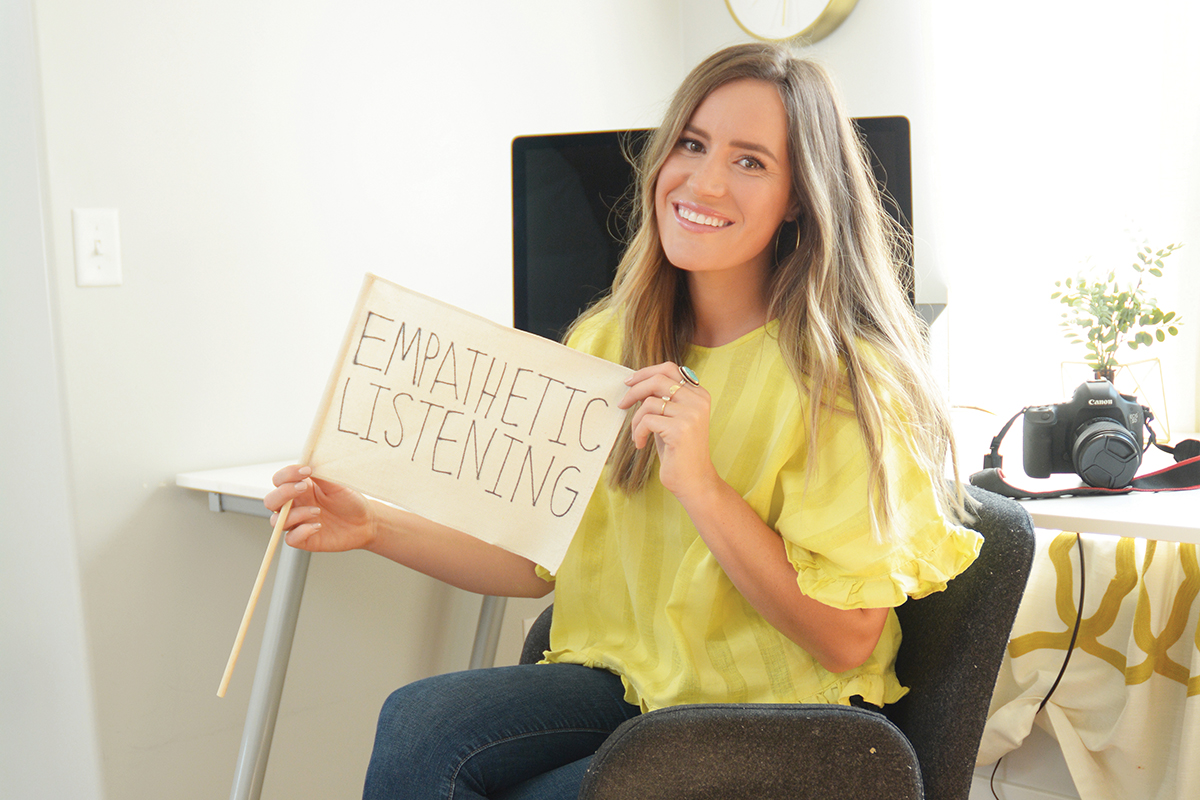 To start The Listening Ear Project, Katie Cheesman taught herself entrepreneurship, videography and interviewing. For the past five years, she’s run a one-woman show, but recently she hired a videographer so she can focus on the interviewing.

For the past five years, Katie Cheesman has had a front-row seat to the power of empathetic listening.

In her nursing career, she switched to home health so she could have more time to listen to her patients tell life stories. She became especially fond of one patient and his wife.

“They were the most adventurous, fun couple. They’d built an airplane together and had a landing strip in their front yard. They’d traveled the world. They were opposite of stereotypes for older people,” she says.

Convinced that someone needed to document their lives, she asked if she could film them telling their life stories. Even though she was an amateur videographer, Katie created a video of the two of them talking in the home they built together. Then a few months later her patient passed away, and the family was so grateful for Katie’s video gift.

After creating that first keepsake video, Katie was hooked. For the next six months she interviewed elderly friends — and friends of friends.

“I’ve always felt a deep connection to seniors. My first job was in an assisted living center. I feel like I connect way better to an 80 year old than someone my age. It’s just so natural for me,” Katie says.

She quit nursing and focused on documenting life stories. For about three years, she pursued the project just as a hobby. Then in October 2018, she decided to turn it into a business. She called it The Listening Ear Project, and families can hire Katie to create short life documentaries for their aged family members. So far, she has interviewed more than 200 seniors.

“I try to create a space where they feel like I’m genuinely listening to them and there’s no judgment. It’s just me and them. Usually we’re just strangers, which is amazing because there’s this deep connection once they feel safe. Then they open up and tell me everything,” she says. “After every single interview, I leave thinking, ‘That is the most amazing person. I love them.’”

Spending nearly five years consistently interviewing people about their live experiences has changed Katie. She’s watched herself grow into a more accepting and empathetic individual through simply listening to their stories.

“When you connect with someone and they’re vulnerably telling you about their life, it changes how you view people. My whole perspective has been expanded,” she says. “They’ve changed everything for me. They’ve changed how I see life, who I am as a person, how I raise my children, how I treat people. They’ve taught me what true joy looks like, what real grief and heartache looks like, what it means to work hard and to be humble and grateful for everything we have.”

Because of this personal transformation, Katie waves the flag of empathetic listening, wishing that everyone would open an ear to each other.

“Our society is just so divisive. If everyone could have my job and sit down and listen to each other, there would be so much more empathy, love, acceptance and understanding,” she says. “Sometimes we’re talking over each other, but if we could just listen, everyone would be able to feel that magic I have felt.”

The power of empathetic listening came in handy during a crucial trial in Katie’s life when her husband came to her with a faith crisis, which introduced unexpected challenges into their life and marriage. Although difficult, she’s learned to approach these challenges with the same empathetic ears she takes to her interviews.

“If you saw my husband the way I see him, with tears in his eyes when we’re having these intimate conversations, you wouldn’t come at him with, ‘Well, why don’t you try harder?’” she says. “Diving into all of this has helped me see the true nature of God and what it means to be a disciple of Christ and truly mourn with those who are mourning instead of placing judgment, labels or condescending words.”

Katie shares her story and journey in a safe space she created on Instagram called @spiritual.sojourn.

“Through opening up and sharing our story, I’ve had countless people come to me in the same boat, asking for advice,” she says. “I feel like God is telling me that everything is OK and that things will work out. I just think He’s so much more merciful and gracious than we give Him credit for.”

Between her work — which she feels is more like a calling — and her spiritual journey, Katie wouldn’t go back to the non-listening space. She never wants to depart from listening to the why behind the reality.

“I’ve seen the contrast from where I was to now. I wasn’t listening before. I’m not saying this in a pretentious or prideful way, but where I am now, in a place of listening, I have so much more love. I feel more love and light — and just acceptance for humanity,” she says.

The COVID-19 pandemic has drawn back the curtains on how society dismisses the senior population and often stereotypes seniors as irrelevant and disposable. But Katie Cheesman, who has made it her life’s work to document the life stories of our senior population, wholeheartedly disagrees with the notion.

“As I’ve interacted with these people, all of those stereotypes have been completely debunked and melted away. In fact, I feel just as comfortable hanging out with my 80-year-old friend as my 29-year-old friend. They’re witty and funny, and they’re up to date. They are educated and have so much wisdom that people look past and feed into those stereotypes, which is unfortunate. That’s what I’m trying to change. I’m trying to help people see how incredible this generation is and how much we can learn from them,” she says.

Angels Among Us: Jeff Burton Can’t Stop Saying ‘Yes’ When The People Of Utah Need Him Next post