Home Utah Valley Magazine Angels Among Us: Jeff Burton Can’t Stop Saying ‘Yes’ When The People Of Utah Need Him

Angels Among Us: Jeff Burton Can’t Stop Saying ‘Yes’ When The People Of Utah Need Him 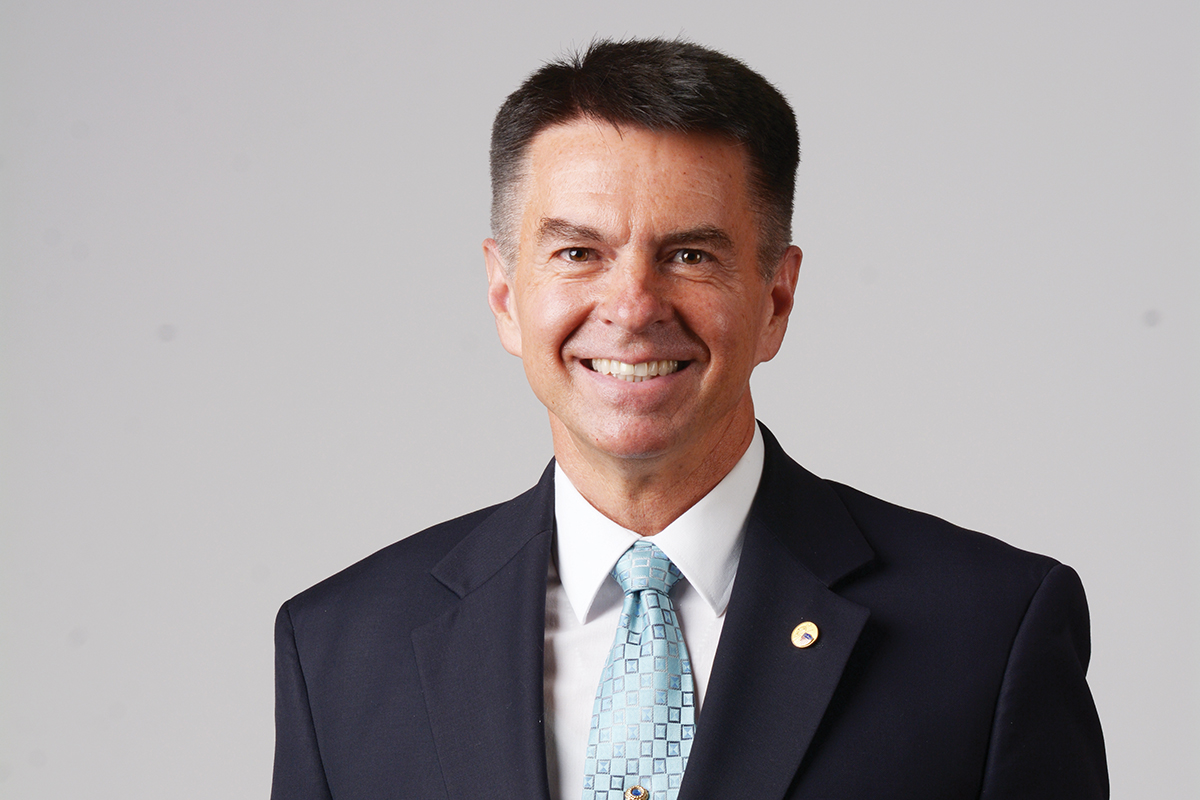 Last November, when Covid-19 wasn’t in the vernacular and going to Walmart in a mask would have been suspicious, Jeff Burton was in his last days of service as the adjutant general of the Utah National Guard.

He was looking to slow down — not too much, but a little — and work for the U.S. Department of Veterans Affairs, assisting residents at the Central Utah Veterans Home in his native hometown of Payson. While he enjoyed the day-to-day operations with his new gig, Jeff still felt drawn to do more. So, he filed as a candidate for the Utah House of Representatives (he won the Republican primary and will run unopposed in November’s election for the House seat representing Utah’s District 66 in south Utah County).

Understatement alert! The world looks a lot different in 2020 than it did in November 2019. When Covid-19 concerns were looming this spring, Utah Health Department executive director Dr. Joseph K. Miner needed to work from home due to underlying health concerns. The lack of a day-to-day, in-office leader led Utah Gov. Gary Herbert to reach out to Jeff to become acting executive director for the state’s Department of Health.

“When the governor called, I couldn’t say ‘no,’” Jeff says. “I am trained and experienced in emergency management, and I felt I could bring some of that training and insight into this current situation.”

So, on April Fool’s Day, with Utah and the rest of the country in the early days of an unknown, deadly pathogen, Jeff walked into the Utah Department of Health and began doing what he’s done his entire professional career — protecting Utahns. He immediately began working closely with Gov. Herbert and Lt. Gov. Spencer Cox to develop Utah’s response to Covid-19.

“We have to have a multi-faceted approach to the situation,” Jeff says. “Of course, there are health concerns. However, there are also political and economic considerations that have to be weighed.” 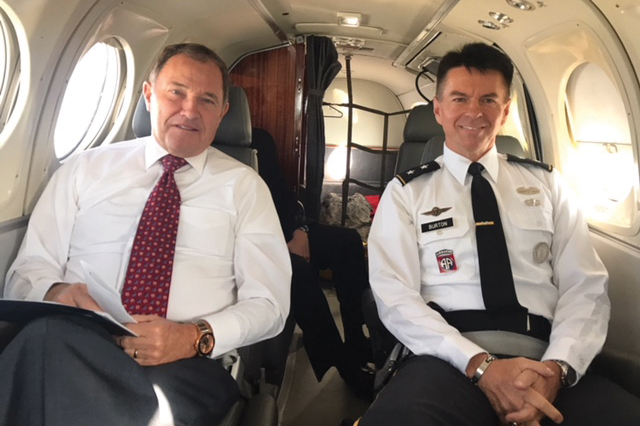 Jeff Burton (right) continues to be a right-hand man to Gov. Gary Herbert, even after his retirement from military service. Photo courtesy of Jeff Burton.

The early days of April were tough. Disease models were scary and the future looked bleak.

“It’s hard to be an ‘acting’ anything,” Jeff says. “People know you’re not permanent and you have to immediately start doing all you can to build trust within the organization and show you love your people. When they know they have top cover from you, they will be better able to do the things you need them to do.”

He also understands that high level positions often receive a high level of criticism, due to the number of lives affected. Everyone comes at situations with individual perspectives, concerns and priorities. When navigating the needs of more than 3 million people, myriad factors have to be considered.

“People in health are always going to be extra conservative in their suggestions,” Jeff says. “Their perspective leans toward the medical concerns, which is their role. However, there is a rub between the health professionals and those suffering in other ways.”

These other ways include economic, academic, mental and emotional considerations.

“I wish people could be in the room with us as we’re discussing these things,” Jeff says. “We care about the citizens of this state. We live in the community. We don’t make any of these decisions in a vacuum. We bring in experts with different views and weigh all of the factors with the best information we can get.”

Jeff’s experience in organization and emergency management make him an asset to elected decision makers. But it doesn’t mean he makes the decisions. That’s best done by those elected by the people.

“One of the best things we’ve learned is to make decisions in conjunction with elected officers,” Jeff says. “Health officers are advisors to elected officials. Elected officials report to the people. We don’t want an appointed person to come out and become an autocrat. Naturally, this process puts a lot of decision-making power with the governor.”

While Jeff is still concerned with the virus, he does feel better than he did on April 1.

“We know a lot more about the virus than we did then,” he says. “We still respect it, but the models were so negative and scary. Luckily, those numbers haven’t come to fruition. We believe we’re in a better position than we might have been.”

The immediate concerns on Jeff’s mind include opening schools and an unknown flu season.

“Nothing is more important to us than our children,” Jeff says. “We take opening schools very seriously. We need to educate our children and prepare them for the challenges of the future. We need to keep education flowing.”

The state leadership team has worked with state education officials to develop guidelines allowing school districts to open safely, while giving flexibility to parents and students.

The upcoming flu season is another concern, since influenza can test hospitals without the added challenge of Covid-19.

“My No. 1 concern is exhausted healthcare workers,” Jeff says. “We have sufficient numbers of workers, but we may not have enough for a major emergency surge. These are dedicated and skilled professionals, developing new treatments that are improving outcomes for Covid-19 patients. But with that comes a heavy workload.”

Despite these challenges, Jeff is optimistic about the immediate future of Utah and its fight against Covid-19.

“We need to focus on the positives,” he says. “We live in a global world, which brings a lot of positive things to our lives. But, with that, we will have to get used to the fact that we’re more vulnerable than we’ve been. This, and other viruses that will follow, will continue to be an increasing concern, but we will be ready to face those challenges.”

With Jeff’s assumed election this fall — and with his role as temporary leader understood from the beginning — his time sitting at the right hand of Gov. Herbert and other elected officials will be coming to an end, most likely in August.

However, as a new member of the state House of Representatives, his service and decision making will still be reporting for duty.

All Ears: Waving the Flag of Empathetic Listening Previous post

Angels Among Us: Shauna Brown Fights For The ABCs Of Adult Literacy While Fostering A Happy Home Next post