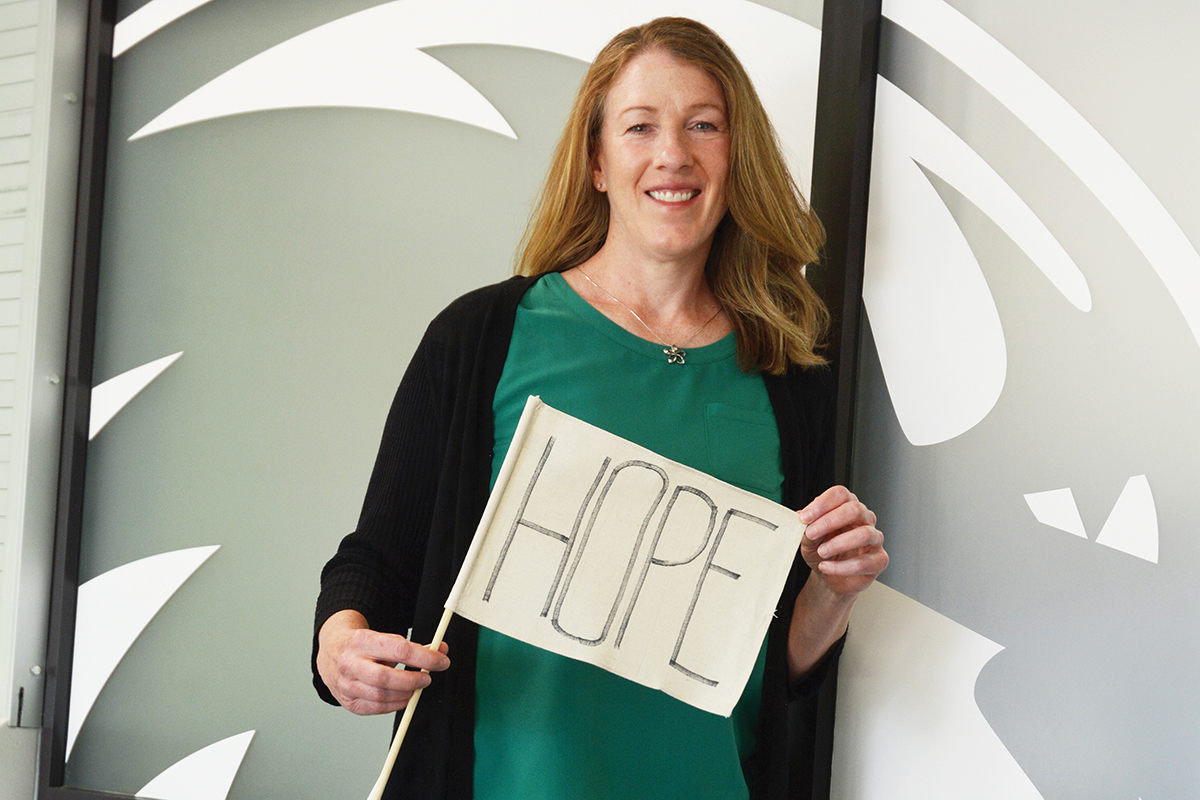 Beyond basketball and believing in student athletes, Cathy Nixon is also passionate about fishing and family. “I have 19 nieces and nephews who I consider my own kids. I’ve stolen all of them from my brothers,” she says. “I have a very rich life of relationships within my family and extended family.”

One of Cathy Nixon’s life passions is helping create opportunities for others. She coached the UVU women’s basketball team for 24 seasons, leading the team from the junior college ranks to Division I and the WAC, mentoring her players along the way.

Then in April 2019, Cathy became a senior associate athletic director for alumni and community relations for UVU Athletics. When she switched job titles, she was the longest-tenured coach in the WAC. In her new capacity, she’s expanded her influence to the women’s volleyball and golf teams.

And in today’s world of confusion, she waves the flag of hope, of a bright outlook and an optimistic future.

Cathy Nixon grew up in Duncanville, Texas — a city known nationwide for its youth sports programs — and among five competitive older brothers who didn’t go easy on her when playing ball.

“Growing up, basketball is what I wanted to do with every minute of my free time. I remember when I was in junior high telling my mom I thought I was addicted to basketball because I just couldn’t stop,” Cathy says.

During her high school junior and senior seasons, Cathy was a high school All-American and received exceptional coaching. After high school, Cathy moved to Utah to play for BYU in 1984. After graduation, she immediately became an assistant coach for BYU. Then in 1995, Cathy became the head coach for the UVU women’s basketball team and navigated many transitions, including around the time UVSC became UVU. Cathy led the team from playing junior college competition to the NCAA Division I.

“No one had ever done it in the history of college athletics, and no one will ever do it again. They’ve made rules that you can’t,” she says.

During this time of transition, Cathy had time to discover what drives her work.

“I made the decision that what was important to me was to build a program, not just a resume,” she says.

Because of that conscious focus, Cathy dedicated herself to building the best program possible. So when she faced the opportunity to become an administrator last year, she recognized it as a chance to expand UVU athletics and broaden her influence for good.

“I hope I can continue to have an impact in helping build not only just the women’s basketball program, but all the other sports. I want to help set up the student athletes for success in life,” she says.

About eight years ago, this philosophy led Cathy to follow the lead of UVU wrestling coach Sean Warren to set up a mentor program for the student athletes. The idea is that local business leaders mentor the players. The transition from being a student athlete to a working professional is often challenging, and these coaches wanted to connect the players to all-star professionals who could act as cheerleaders for their players off the court.

Now, several years into creating this pipeline of mentorship, Cathy says this was one of the best things she did as a coach.

“Without exception, as we’ve met these women in the community, we learn they are some of the most amazing, generous, genuine people, and their passion is helping young women be successful,” Cathy says.  “They’ll say, ‘I don’t have time, but I’m going to do it anyway. I’ll find a way to do it.’ To see the time they invest and the real connection they develop with the student athletes is awesome.”

From the court or behind a desk, Cathy raises the flag of hope by creating opportunities for others.

“In today’s world, I wave the flag of hope and faith. As everyone knows, it’s a very uncertain world, but there’s just so much hope. There are great young people like the student athletes whose lives I get to be a part of who just give me hope. We’re going to be fine in the long run because there are great young people coming up who have the skills to lead us through whatever we need to go through.”

Cathy sees the message of hope through what she has both learned and taught while interacting with student athletes for so many years.

“We talk a lot in athletics about controlling the controllables. As a coach, it’s something I tried to communicate. And how applicable is that to our situation now? There’s so much you can’t control, but you just have to look at the very few variables you can and focus on those. Then just be in charge of your own happiness. There’s enough doom and gloom out in the world that if you ride the wave of the news or society around you, I think any of us could be in a pretty dark place. Choose to control the things you can. Choose happy,” she says.

Although her bio is loaded with wins and accolades, when Cathy Nixon looks back on her coaching career, she sees integrity as the MVP.

“It’s hard to have pressure to win and be faced with those important choices,” Cathy says.  “The thing I’m most proud of in my coaching career is that I never compromised my character or integrity in the pursuit of wins. I wasn’t perfect, but I always tried to do it the right way. I realized that in the long run I wouldn’t always be in coaching, and you want to be able to look back and not have sold out for anything.”

Cathy’s commitment to integrity stems from watching her own coaches in high school and college. On her high school team in Texas, she played in front of crowds of 12,000 people — and winning was a huge priority. But Cathy gleaned a deeper lesson from her coach, Sandra Meadows, a member of the Women’s Basketball Hall of Fame.

“I learned from her that it only really mattered that you won with integrity. I watched her make those decisions throughout my high school career where she chose to do things the right way. Both she and my parents ingrained in me that integrity is really the only thing that matters. If you can win and have integrity, then I think that’s the ideal situation.”

The experts at Intermountain Pediatrics are team ‘mom’ in the quest to raise healthy, happy, functioning adults Next post