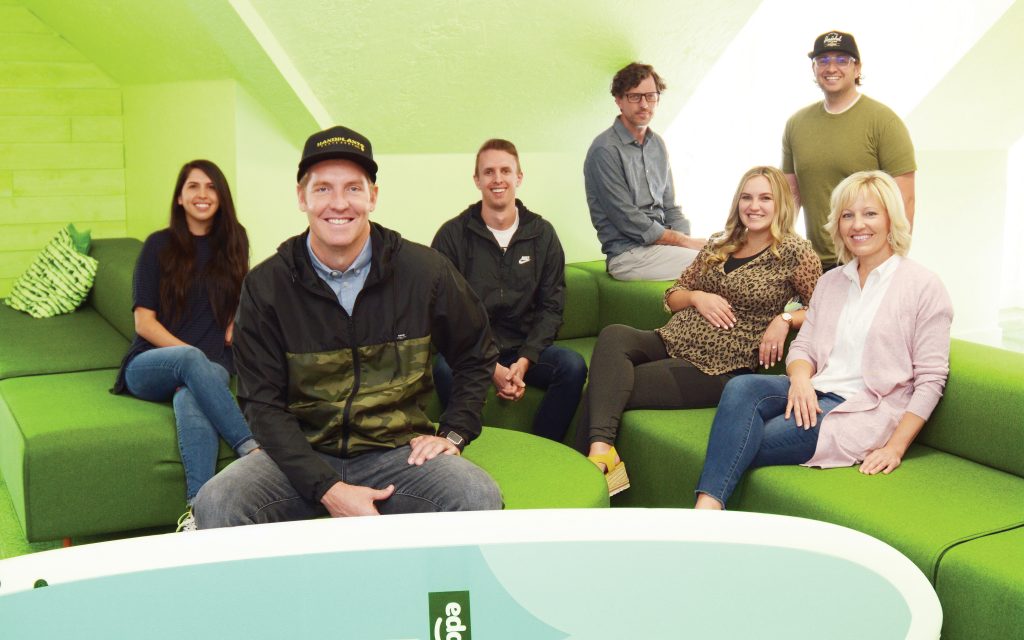 There’s no debate about it. Nine-year-old Ryan Sagers painted a sign with his vote for president: BYU star Travis Hansen. The 6-6 basketball star never forgot this “poster child,” and the two have since re-created the classic pic they took at one of Hansen’s basketball camps. “Ryan is a unicorn. He’s super smart,” Hansen says. “Life is like that. People get put in your path that then become part of your journey.” The two fans of each other have signed on the same team, named it Eddy (after the legendary surfer “Eddie Would Go”), and are riding the wave of HR software. Steady Eddy.

RYAN: When I was 9, I would go to BYU basketball games with a painted face and a sign ­— “Travis Hansen for president.” My grandparents (Stephen + Sandra Covey) had front row seats. I’m a huge Cougar fan.

Travis: I noticed him and would walk over to give this adorable kid a high five.

RYAN: During that season, my family was eating at Riverside Country Club and Travis was at the next table. My mom convinced me to ask for his autograph. He signed it and then said, “What’s your email?” It was 2003 and I was a kid with no email. But Travis gave me his email address and told me to stay in touch. I went home and created flylikemike23@hotmail.com. From then on, we exchanged 1-2 emails a year. He sent me a game-worn Atlanta Hawks jersey.

Travis: Then Ryan played basketball for Timpview and won the state championship.

RYAN: And Travis was one of the first ones to reach out and congratulate me. I started coaching at the Travis Hansen basketball camps. Later when I had entrepreneurial ideas and dreams, Travis had me in his office and we would brainstorm on the whiteboard. None of those ideas worked out, but this solidified our relationship. He invited me to work with him at Tesani where I was an R&D intern. Travis wanted me to research the next company to start.

Travis: At one point, we were six weeks away from starting a luggage company. I was flying to New York to buy luggage!

RYAN: Jeff Kearl at Stance had told us luggage would be a good opportunity. But ultimately, we landed on the idea that we’re both passionate about small businesses. We wanted to help entrepreneurs grow and endure.

Travis: Succeeding in business is all about the people you have and how you train them and create a team. The HR software industry is a hot market and a lot of venture capital goes into it. Having run my other businesses, I had used other HR software and I knew it could be better.

RYAN: He’s competitive like that. He knew we could build a cooler HR system. So we started in April 2017, but neither of us have a background in software, so there was a lot of trial and error. Travis was networking like crazy.

Travis: Tech is complicated and we realized we needed a technical co-founder. I went after Greg Burgess who had been at Ancestry for 14 years. He told me “no” three times. But once he came, things completely changed. He brought over others from Ancestry with him. It took some serious Russian negotiation to get them on board.

RYAN: In January of this year, the wheels finally started turning. The clock was now running on our gameplan.

Travis: I’m all about the team mentality. At Eddy, we’ve put together a magnificent team and then worked at how to improve. We have the most secure HR software on the planet. It’s built with the DNA of Ancestry, so it’s robust but also consumer-focused. The simplification and design is remarkable.

RYAN: People’s jaws drop when we demo our product. Traditionally, the HR software industry is lacking in innovation. Our team’s talent shows in our product. Drag and drop. One click. HR is complicated, but we’ve worked hard to make it simple.

Travis: In one year, we’ve signed on 400 companies and we run payroll for 10,000 employees. Clients include Valley Women’s Health, Steps Recovery, G.O.A.T. Haircuts. We’ve brought on three sales people to add to our client base. Business is fun, and the most charitable thing you can do is to create jobs and then mentor the team.

Ryan: I’ve had the best mentors. Blake Roney was my mission president, and Travis has been mentoring me since my poster days. I’d still vote for him for president.