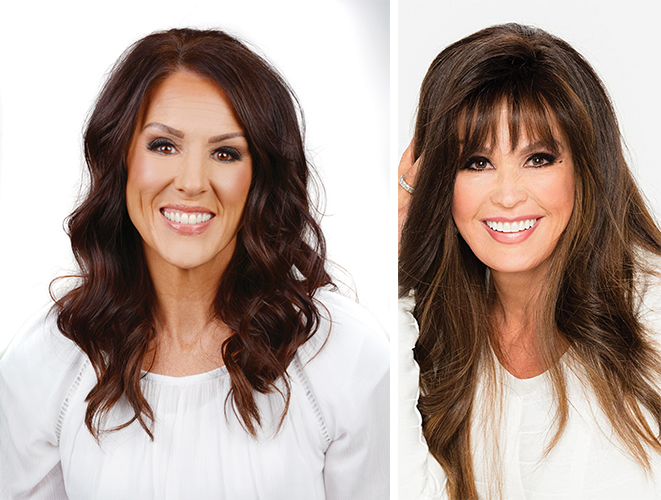 UV: When were you first told you looked like Marie Osmond?

Growing up, my father always told me I looked like Marie. We watched the “Donny and Marie Show” every week.

UV: Do you have any similarities other than your appearance?

I grew up surrounded by handsome brothers like Marie — she had eight brothers and I have five. I also loved dancing growing up. My mom signed me up for a class the minute I turned 3, and I have loved it ever since. I also remember reading in Marie’s book that she struggled with an eating disorder, and I have struggled with that in the past as well.

UV: Have you ever met your lookalike?

Yes! My husband (Senator Todd Weiler) asked a favor of one of his colleagues, Aaron Osmond, and I got hooked up with tickets to Marie’s show in Vegas, as well as backstage passes. I surprised my friend from England for her 50th birthday. She was a huge Osmond fan and became interested in joining the LDS Church because of them. She eventually converted to the church and it was so fun to help her meet Marie. Marie was so kind to us.

UV: If you could live your lookalike’s life for one day, what would you do?

Who is MARIE OSMOND? Marie Osmond grew up on stage performing with her family’s singing group, the Osmonds. She went on to host the “Donny and Marie Show,” and later gained solo success as a country music artist. Most recently, she headlined a Vegas show with Donny from 2008 to 2019.