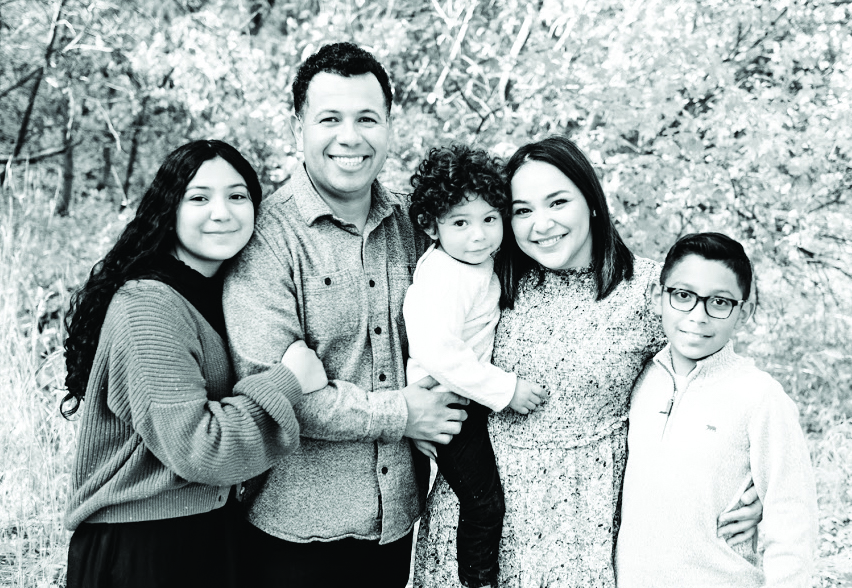 Christmases now are a far cry from the ones Roberto Sanchez experienced as a child in El Salvador. His father moved to the United States when Roberto was just 4 years old — shortly after Roberto’s uncle was killed. Roberto was left with his mother and two sisters in a country torn by the Salvadoran Civil War, which lasted until Roberto was almost a teenager.

“The Cold War was not cold to us there,” Roberto says. “Where we lived, there were times when we were in the middle of the fighting. We were worried about getting hit.”

Throw in the constant concern that he would be apprehended and expected to fight for the guerrillas and Roberto’s childhood wasn’t exactly filled with peace and goodwill toward men.

When he was 14, his mom made her way to the United States to join her husband (after each had joined the Church of Jesus Christ of Latter-day Saints separately and in different countries). Four years later, Roberto and his two sisters finally reunited with their parents in California.

After serving a religious mission to Ohio, Roberto made his way to Orem and attended UVU. While he was there, he met his wife, Elizabeth, who was a recent immigrant herself from Chihuahua, Mexico.

“I moved to Utah to learn English,” she says. “I could get more of a scholarship to college if I was proficient in English, so I moved to Springville with my uncle. My plan was to live here for a year while I practiced English and then go back to Mexico for university. Plans changed.”

Elizabeth was always interested in art and had a fortuitous meeting with Gary Price, the legendary sculptor based in Springville, who helped foster her artistic goals. Eventually, Elizabeth started attending art classes at UVU — despite not being enrolled as a student.

“I would just go to classes and learn,” she says. “One of the teachers told me just to bring my art supplies and work with them. It was amazing! I felt I could express myself, even if my English wasn’t very good.”

In 2004, Roberto and Elizabeth got married and blended their immigrant experiences into a new American dream that now includes a home in Spanish Fork and three children — daughter Camila (12) and sons Matias (10) and Moses (3).

“We try to take the best parts of all of our cultures and put them into our family,” Roberto says.

They combine cultures year-round, but especially with holiday traditions.

“There are a lot of things Christmas means to each of us that are easy to carry over,” Elizabeth says. “Family is a big part of holidays in Mexico, El Salvador and here. Family is still part of our holidays, too.”

Roberto’s family is still in the United States (although his parents are in the process of selling their house in Lehi and retiring to El Salvador) and are a big part of the festivities. Because Elizabeth’s parents are in Mexico, the family tries to spend every other Christmas in Chihuahua.

“We also celebrate the Day of the Dead, but with our own spin,” Roberto says. “We show our kids pictures of our grandparents and tell them stories we remember about them. They love it … although we are starting to tell the same stories over and over.”

In Latin America, Christmas Eve is when many large family gatherings take place, while Christmas is left for worship and quiet immediate family time. For the most part, the Sanchez family still follows those traditions.

“Dinner on the 24th is a big deal and I remember we would get new dresses and clothes,” Elizabeth says. “We would all get ready for dinner in the same little bathroom, while my grandmother would be in charge of the dinner.”

And you weren’t allowed to help with dinner without the blessing of grandma.

“If she didn’t trust you to help, she might just ask you to go buy something from the store,” Elizabeth says with a laugh.

The Sanchez family enjoys using elaborate nativity scenes to teach about the life of Jesus Christ.

“Back home, nativities sometimes include a whole village, centered on Jesus Christ,” Roberto says. “It’s a strong Christmas message. We like to use nativities to teach our children about the meaning of Christmas.”

While turkey is popular among all three influential cultures and plays a big part in the Sanchez family celebrations, native dishes are prominently featured.

“One dish we always have — probably because it’s my favorite — is pozole,” she says. “My kids love it and we eat it for lunch, dinner or even breakfast.”

Pozole is a traditional soup that dates to pre-Columbian times and is made of hominy, meat (often pork or chicken) and a variety of spices and other ingredients.

“We will also include other traditional favorites, like tamales, depending on who we’re eating with and who is making the food,” Roberto says.

Presents from family are opened at midnight after the Christmas Eve celebrations. Christmas morning is reserved for presents from Santa Claus.

“We make the kids wake us up before heading downstairs — and the sun has to be up,” Elizabeth says.

The rest of Christmas Day is spent inside watching movies and eating “cozy foods.”

“It’s too cold to go outside,” Roberto says with a smile.