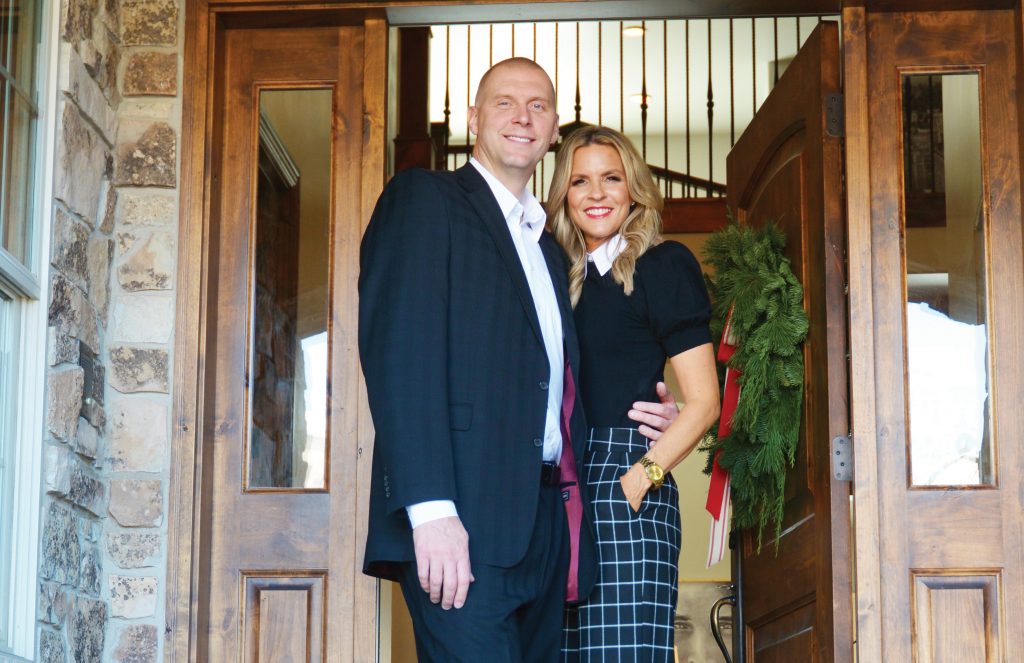 When Mark Pope was playing for the New York Knicks, he and Lee Anne took a shot on a new Christmas tradition (which lasted one season). On Christmas Eve they stopped at the best butcher in Manhattan to buy hanger steaks for their special dinner. Lee Anne had worked for David Letterman who put the Madison Avenue butcher on the map with on-screen antics and off-screen orders of meat for his employees and loved ones.

“In true Mark Pope fashion, he walked in and said, ‘I want the biggest and best you’ve got!’” Lee Anne remembers watching from the car. “Mark comes out with these two steaks — and I’m looking at the receipt: $500! And they weren’t even cooked!”

The two were renting a townhome with a broiler underneath the stove.

“We had to slice them in half to even get them in the small broiler, and then it took like seven hours to cook!” Mark laughs.

To this day, Lee Anne can’t believe they spent that much on steaks — or that Letterman had been dropping serious coin on his red meat gifts.

“But if you woulda walked in with me, Lee Anne, you would know it was worth every dime! The butchers were taking pictures and it was such an exciting, happy moment in there,” Mark says with recruiting zeal. “It felt like Christmas.”

And that’s Mark Pope. He goes big. And he goes home. His lively wife and passionate four daughters are his world. And together, the Pope family has bled blue, then green, and now blue again with coaching posts at BYU, UVU and back to the head job for the Cougars.

The best gift of Christmas

Lee Anne grew up as the daughter of a basketball coach (University of Utah’s Lynn Archibald), so she knows the most important Christmas tradition.

“The world stops for 24 hours and it’s family time,” she says.

Mark adds,  “The world comes to a screeching halt.”

With Mark’s career as both a player and coach, there have been games, practices and travel leading into Christmas Eve and sometimes starting up again on Christmas night. (His first year coaching at UVU, he got home late Christmas Eve after his players had staggered flights coming home from Louisville).

But for a few beautiful hours each Christmas, the ball stops bouncing — and the traditions are in play.

“For an eight or nine-year stretch you would find me at Walmart at 4 a.m. on Christmas Eve morning because I was finally in a place to get ready for Christmas,” Mark says.

And this was after Lee Anne had “worked so hard to keep the gifts even for the girls and to make lists and think through everything.”

One year, Mark came home from his early morning spree with plastic golf clubs for one of the girls.

“And I’m laughing like, ‘What is this?’” Lee Anne says. “But we are all obsessed with him. We’re all about Mark — if he coached on the moon, we’d be all in for the moon. The girls and I love whatever time we get with him.”

Mark’s childhood was gifted with steep traditions. On December 6, the family would celebrate Saint Nicholas Day. The kids would also spend the holidays packed in the car to go caroling, “which was absolute torture,” Mark smiles.

His mother served lamb at the same time each Christmas Eve, and on other nights she would host “Christmas Around the World” to introduce her kids to global cuisine. Plus, the family would make sweet rolls to take to neighbors.

Lee Anne’s family also took gifts around, but they weren’t homemade. They tossed basketball T-shirts to their loved ones.

“We have found a happy medium with Krispy Kreme,” Mark says. “We pick up 30 boxes of donuts and take them around.”

Other Christmas traditions also center around food — and convenience.

“One Christmas Eve I had decorated the table and was planning on fixing a full meal of turkey and potatoes — basically Thanksgiving dinner,” Lee Anne says. “And then Mark flew home on Christmas Eve afternoon and we fell asleep. When we woke up around 6, we didn’t want to make dinner anymore. So we went to P.F. Chang’s. And that started a Chinese food tradition for a few years. It’s nice to have the simplicity of eating out because we’re always up late while Mark assembles 19 dollhouses and we get ready for the next day.”

The Popes love tradition but also have a family culture of flexibility. Mark’s career took him to four NBA teams — “I was never good enough to stay anywhere very long,” he says in his confident but self-deprecating way.

In fact, the couple marks the birth of their daughters in each town. Even Lee Anne was “acquired” when they were at a different team. The various jerseys are displayed at Mark’s office adjacent to the BYU Marriott Center. And their team allegiances are also on display at home, adorning their family Christmas tree with ornaments purchased and gifted to represent Mark’s career both dribbling and play-calling.

In Lee Anne’s family, they opened up all their presents on Christmas Eve.

“The Archibald family is not patient,” Mark quips.

“And Santa would come on Christmas, and then we would have brunch and head to see a movie — or sometimes two,” Lee Anne explains.

She was an adult before she realized some people open up all their presents on Christmas morning.

The Popes signed up for a gameplan of switching jobs and cities. But for a decade, they’ve been keeping score from their Orem home — which is 8 minutes from BYU and 8 minutes from UVU.

“We’ve had three jobs and 10 Christmases in one house — it’s truly been a gift!” Lee Anne says.

This mother of four switches up the gameplan in other ways, including her own advent calendar where she makes up rhymes every day in December and the girls listen to the clue and then go on a treasure hunt to find the gift — perhaps a lipgloss or face mask.

“Sometimes they are funny and irreverent rhymes, and some are simple and straightforward,” she says. “Mark is so busy that many traditions are just for me and the girls.”

But before there were girls, there was Mark and Lee Anne Pope. They communicated for weeks over the phone before meeting in person. Mark went shopping for a new outfit and chose a turtleneck. And when he picked her up, he had his brother’s baby in the car who he had to drop off at a babysitter. The laughs and memories in this relationship started in the first quarter and the clock has kept running.

Mark and Lee Anne’s first Christmas together was in Turkey, and even though it’s a Muslim country they saw Christmas trees and Santa everywhere.

“Mark bought us a little tree, and our presents were taller than the tree,” Lee Anne remembers.

The gift of COVID-19

Mark’s predictable game clock did the unthinkable last spring when it stopped — not to review a call, but to end a magical season where a group of Cougar seniors had worked hard and “mortgaged their Friday nights” to get to the NCAA tournament, a place the school hadn’t been in a decade.

Mark and his beloved players were in the locker room and learned together there would be no end of their season. The buzzer had sounded. That was the toughest moment in Mark’s coaching career. He didn’t have time to prepare a speech or figure out how to frame the situation for the players. There were tears. There were long talks.

“It had been such a beautiful season. TJ Haws hit the game-winning shot against Saint Marie’s and then gets his wife out of the stands so they can go have a baby,” Mark says. “It took a pandemic to stop that team. That’s the only thing that could have done it. It almost seems selfish that we wanted more from last season.”

After the tears, Mark and the boys went to work doing what they know how to do best — find ways to win in life. When the second punch of the year hit with the fight for social justice, Mark put together Zoom calls where current and former players talked through the issues. They heard from religious and political leaders. They huddled together on the topic.

“Mark has been saying all year that if we don’t come out of this better, then what was it all for?” Lee Anne says.

And that’s been Mark’s strategy, even though nothing can fix the heartbreak of last year’s version of “March Madness.”

“The beauty of 2020 is we’re having conversations that we never would have had — uncomfortable, vulnerable conversations,” Mark adds. “As a team, we went on a listening tour. Our guys were really generous with each other and willing to talk through a lot of things. Our team is about more than basketball right now. We are growing our character as human beings. We’re becoming more courageous and more giving. This is all getting stirred ‘into the dough’ of our team culture.”

Fortunately, there will be a 2020-2021 basketball season, and Mark finalized the schedule on his way to the cover shoot for this issue of Utah Valley Magazine (read more in the editor’s letter on page 18).

And that will be a Christmas-worthy gift to the BYU fans who are hyped about this 6-foot-10 coach with a short haircut and a heart for winning on and off the court  — and especially with his home team.

Holidays with Heart: Local artist Trey Warner shares the spirit of giving wrapped up in films Next post