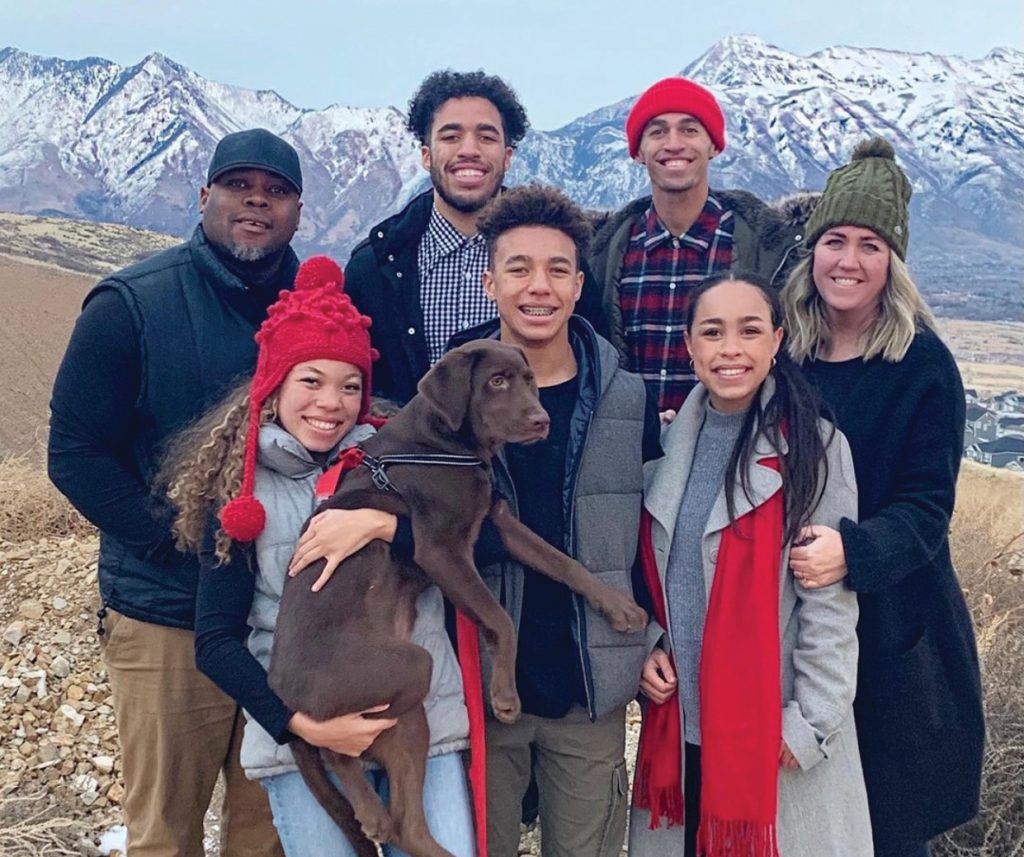 Will Snowden was a freshman football player at BYU when he saw a woman that “looked nice” and asked her for a ride home. Now, 24 years later, Will and his “ride or die” are married and still enjoying the ride together.

“It was the ’90s, it was a different time,” Courtney says as she and Will sit in their home in Lehi with four of their five children. “That is not how I would suggest my children meet someone now.”

While both Will and Courtney anticipated moving from Utah Valley after their days at BYU were done, a good sales job out of college for Will kept them close. Now, they find other reasons to call Utah home.

“Utah is a really nice place,” Will says. “She’s originally from New York and I’m originally from Colorado, so we like the snow and the seasons. Plus, it’s a safe place to raise children.”

Now those children are mainly raised, even if they’re not quite out of the house. While most of them are in college, they’ve all taken some level of time off based on COVID-19 restrictions hitting classes and universities around the country. The youngest, Smith, is 15 and battling through Canvas classes at Skyridge High School.

“We get the best of both worlds,” daughter Sibley, 20, says. “We love that each side brings its own feel to the holidays.”

“We’re also a football family, of course, so we will have the games on and just enjoy the time to be together,” Will says.

Also, you can bet that Courtney, and the rest of the family, will be laughing at the wit of Will’s dad, Chuck Snowden.

“Will’s father is a character and will have us hysterically laughing throughout the day,” she says.

When the Snowden kids were younger, Courtney’s parents owned an A-frame cabin at Sundance named “Kindernest,” where the two-dozen-plus grandchildren would reconnect over games, food and mountain views.

“I’m glad we had those chances to get closer to our cousins,”  says Blythe, 18. “As you get older, things are different. You’re still family, but you connect with extended family in a different way.”

This Christmas is still in the works and, like other events in 2020, plans are subject to change depending on the latest executive order or transmission rate. Even the tradition of watching a movie in the theater on Christmas Day — a staple for Will since he was young — may not happen.

Plus, this will be the first year Courtney celebrates the holidays without her dad, who died of cancer last summer. But, regardless of what limitations gatherings may have for the Snowdens, they know spending time with family and mom’s decorations will be part of the plan.

“My mom is the craft queen,” Sibley says. “It will be like a winter wonderland in here. She makes everything. When I was younger, my friends always loved coming over and seeing what my mom had done to decorate for the holidays.”

Despite the festivity, food and football, the Snowdens always hope to slow down and make sure the season is filled with Christian service.

The Snowdens can often be found serving the homeless, participating in Operation: Christmas Boxes and even singing carols with family or in worship services at Centerpoint Church in Orem. They also draw names so siblings have a chance to focus on getting a gift for one another, making the day even more special.

But, as the children grow into adults, Courtney is most grateful they are all able to be together.

“I always thought I wanted my kids to go spread their wings and fly away from Utah, but I actually love that they’ve stayed close, at least for now, and I’ll appreciate it while I have it.” Courtney says.

As children get older, how the holidays are handled changes. Christmas morning starts to look a little different, presents are often more expensive and new members of the family eventually join the fray. Will and Courtney Snowden, whose children are — with one exception — out of high school and moving into young adulthood, offer thoughts on how to make the season bright as the dynamic adjusts.

“As I get older, I realize more and more that all the stresses of life are a waste of time,” Will says. “We try to slow down and remember the reason for the season. We get so caught up in things and we’re so worried about the dos and don’ts of Christmas, we don’t focus on the reason we celebrate. We need to remember that not everything in life is about you. There are others around us.”

Courtney also appreciates what this perspective does for her emotional state.

“I used to get so stressed out,” she says. “Did I get the right presents? Does the house look the right way? That is not important. It’s about creating a space for the family that they enjoy coming back to.”

Time for Family: For the Beebe police family, Christmas happens when folks can gather Previous post