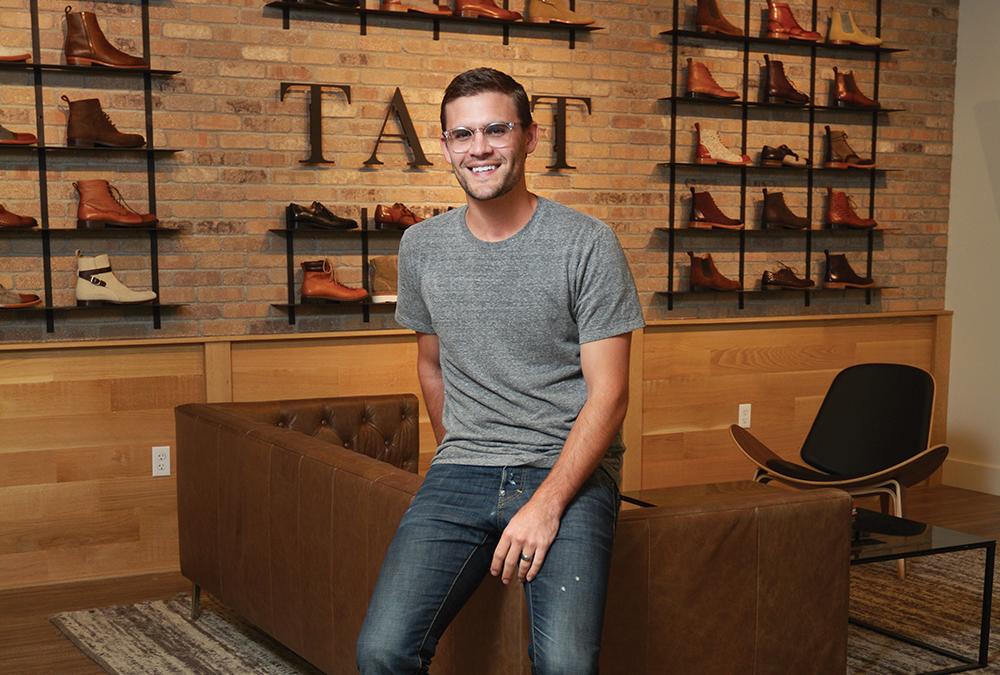 In 2019, Taft CEO Kory Stevens took the advice of fellow entrepreneur Nate Quigley of Chatbooks and checked himself into the mental hospital at University of Utah.

“It was a horrible couple of days,” Kory says. “They kept me safe from myself, but I was still struggling when I returned back home.”

Two weeks later, Kory and his patient wife, Mallory Stevens, were driving the same route to Salt Lake City. They reached the intersection where they could turn right and inch their way to the familiar mental hospital — or they could turn left on Wakara Way and head to Red Butte Garden.

The young parents of three were dressed up and ready to celebrate. They shook their heads at the irony of their route and veered toward Red Butte Garden where Kory was meeting the judges of the EY Entrepreneur of the Year program. Taft had been nominated in the “Emerging” category.

“It was the biggest professional moment of my life, and yet it was a crazy juxtaposition,” he says. “It had only been two weeks.”

Mallory says the judges would never in a million years guess that her smiling entrepreneur husband knew his way around the mental hospital just a few blocks away from the party.

In June 2019, Kory and his entrepreneurial baby Taft Clothing won the EY Entrepreneur of the Year award in the Emerging category, and in his acceptance speech he opened up about his challenges with depression. The crowd hung on his every word and gave Kory a standing ovation.

Others often assume because Kory talks about his mental illness that he’s mastered it. One out of 10 calls and texts he receives are people wanting his help navigating their own mental challenges or those of a loved one — “My cousin attempted suicide, what should we do?”

“I can tell you I am more like your cousin than I am you,” Kory tells them. “People may not understand that I think about suicide every day.”

Kory admits that at times he looks at his life insurance payout as the best way to provide for his family. Thankfully, Mallory lovingly walks in his high-end shoes with him and together they conquer one day and then the next. She tracks everything they learn about nutrition, exercise, the brain, and therapies. All of her findings are in a giant Google doc, which she shares with others when they reach out for help.

“My goal is to get it in a format where it’s organized in a step-by-step process. Have you taken this step? If so, proceed to step two. If not, go back and complete the step,” she describes.

The two have servant hearts, but they also realize their limitations in both time and knowledge to help everyone who comes their way via LinkedIn, texting or phone calls.

The analogy that rings true to the Stevens and that they share when advising others is a backpack metaphor.

“We are each carrying a backpack with bricks in it, and when it’s full we collapse,” Kory says.

“For many, the pandemic is the final brick and the backpack is now too hard to carry,” Kory says. “And the pandemic isn’t going anywhere, so you have to find three other 100-pound bricks to remove.”

The beginning of Covid actually allowed Kory to live his best life.

“I was cooking luxurious meats on the Traeger. We didn’t have to make up excuses not to attend family events or business functions,” he says.

Mallory was making bread every day. The family of five had what they needed — mainly each other. But as the months wore on, it started to feel like Groundhog’s Day. To break things up, Kory took on a challenge called “75 Hard.” It involved 75 days of a strict diet, two workouts a day, reading, drinking water and other positive behaviors.

“I had great results and felt awesome physically, but what’s going on with my body doesn’t necessarily change what is happening in my mind,” Kory says. “It was still a pandemic. And a pandemic doesn’t remove any of the challenges we had previously. So we have all of those old burdens plus this new ‘brick in the backpack’ of a global pandemic — with no end in sight.”

Taft started 2020 “on a tear,” with big numbers in Q1. Then the shoe dropped on March 16, when the company fell back to 2019 numbers and stayed there for a couple of solid quarters.

“In many ways, it feels like we lost a year and that the clock was reset 12 months,” Kory says.

This was especially hard on this serial entrepreneur, whose mental health often mirrors the stress of Taft.

Thirteen months ago, in an effort to restructure Taft so it wasn’t as weighty, the Stevens hired a president — a fortuitous pre-Covid move that made a significant impact on the business and Kory’s mental health.

“It’s a risky decision and it often doesn’t go smoothly because founders are hard people to work with,” he says. “Founders tend to be opinionated and can sometimes make selfish decisions.”

In Kory’s case, the risk paid off.

“I used to spend most of my time doing things other people could do,” he says. “And now I focus on the tasks only I can bring to the table, such as designing weird shoes and coming up with unique marketing concepts.”

Taft Clothing, which primarily sells its high-end, high-priced men’s shoes online, opened a store in New York in November 2019 to fanfare and publicity. Manhattan flocked to the store to see the boots, the fabrics and the unique buckles.

And then in walked Covid, which forced the new store to close for four months.

“We felt that how we handled our team during the pandemic would affect our employees’ perception of their workplace for years to come,” Mallory says. “We had the opportunity to show them we love them.”

Even while the New York retail store was closed, they paid employees their normal wage. Kory and Mallory decided not to lay anyone off — no matter what.

“I would rather run this company into the ground than send my team members out into the job market in a year like this,” Kory says.

“I was praying like crazy that it would all work out,” Kory says. “I was saying, ‘Heavenly Father, I have promised these people their jobs. I don’t know who is going to buy $300 shoes in a year when there’s nowhere to wear them, but please help us be OK.’”

Miraculously, after a few flat revenue months, Taft is “more than OK.” The Stevens attribute this to their hard-working team of 20 that has adopted Kory’s philosophy of openness. The company provides mental health services to the employees and their families. They start Zoom meetings by giving “thumbs up or thumbs down” about their physical, mental and emotional well-being.

Kory leads the way with his characteristic honesty.

“I share my feelings, concerns, fears and triumphs openly with the team,” he says. “I’m leading from that type of platform that allows for everyone else to open up. I am as much a non-professional therapist and cheerleader as I am a shoe designer or CEO.”

Still, there’s no sugarcoating that 2020 has been a tough one for Taft — and especially for Kory.

“Taft wears on me, so to lose a year without a lot of growth to show for it is hard for me mentally,” Kory says.

Kory originally hid his challenges. He was an Eagle Scout. He did well in school and had the lead in show choir.

“I used to seek my self worth through external accomplishments,” he says. “That’s why I was a good student, worked multiple jobs and did everything right in others’ eyes. I needed praise from teachers and parents to sustain me.”

Despite his successes at school, at home he clashed with family members, spent a lot of time in his room, and drew angry pictures. He pulled himself together and accepted a mission call for The Church of Jesus Christ of Latter-day Saints in Cambodia. And that is when hiding his patterns of pretend were no longer working.

“I opened up to my mission president and told him I thought about harming myself every day,” Kory says. “My mission broke me down so badly. It boiled me down to the raw basic parts of who I am. I didn’t care what other people thought anymore.”

Now mental illness is part of his identity and a factual reality he shares with others. After this December interview with BusinessQ Magazine, Kory was headed to give a keynote about mental health to venture capitalists and other entrepreneurs.

Taft is walking in the right financial direction now, but the journey has taken 10,000 steps.

When Kory and Mallory married at ages 21 and 19, respectively, their lives were set for adventure. As a college graduation trip, they flew to Europe for five weeks. They would sightsee by day and daydream of business ideas at night. They settled on no-show socks for men. They launched a Kickstarter campaign and raised $50,000.

During this time, Kory was also making a few dollars as a fly fishing guide on the Provo River — and also buying and selling board games on Amazon.

“It was crap money, but it was me trying to hustle and be creative,” he says.

The couple’s unlikely path also took a jaunt to New York for a job with a salary of $58,000.

“It was a full-on move. I had my dad help me drive the truck out there, with our Sentra on a trailer behind it,” Kory says. “Our plan was to keep working to get Taft off the ground while I accepted this new job in New York.”

Within a month, Taft started hitting new highs and new digits. Kory and Mallory’s expensive rent — along with managing a full-time job and promising side business — wasn’t a sustainable lifeplan. Mallory loved New York more than Kory did, but they both agreed it did not make sense to stay if Kory was going to quit his job and go all-in on self-employment.

“We were paying $2,800 a month for our apartment in New York, and as we were making plans to return to Utah, I told Kory we would be saving money on rent. I wanted to use that extra money to get Kory the mental health treatment he needed,” Mallory says.

And that’s how mental health made it into the family budget and public persona.

“It was impossible for people not to know,” Kory says. “There were times I’d be in treatment for six weeks and the investors couldn’t get ahold of me. We had to tell people around us what was going on.”

Mallory explains it a different way. “If you had a broken leg, you wouldn’t be able to hide it. Kory’s challenges weren’t much different.”

For starters, Kory is clear that he has mental illness, but it doesn’t define him.

“I am an Eagle Scout. I served a mission and graduated college. I have a little shoe company. I’m the father of three children. I hold church callings. I volunteer,” Kory says. “You can be functioning and still have a dire mental health situation.”

Kory’s storyline doesn’t end with a cure and a red bow. And neither does this article. Mental illness isn’t shameful. It isn’t a life sentence of mediocrity and a lack of relationships. But it is a reality. And it can be an ongoing plot for entrepreneurs who willingly walk into stress, discomfort and uncertainty. Together, we can link arms as we walk in each other’s shoes. Breathe in, breathe out. Let’s go.

Expert Care at the Heart of Utah Previous post