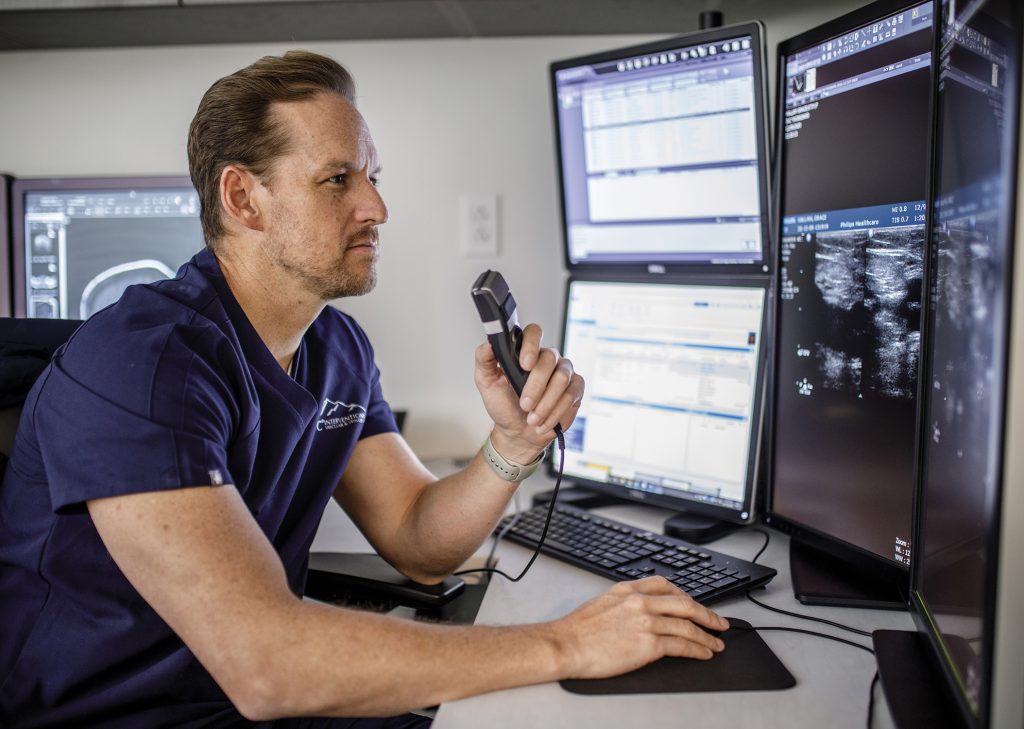 The Vascular and Interventional Radiologists at IVC® recently had a unique experience treating a pair of patients who came into their clinic. On this particular afternoon, a pleasant father and son pair came to the IVC® Interventional Vascular and Vein Center together for evaluation of different vascular issues. Robert Sr. (age 62) and Robert Jr. (age 30) each presented with a vascular condition common to their respective age group.

For months the younger Rob reported heaviness and a dull pain in his scrotum. On self-inspection, he noted a soft clump next to his left testicle that he described as feeling like a “bag of worms.” His primary care physician ordered an ultrasound that revealed a cluster of enlarged veins in his scrotum called a varicocele.

Varicoceles are abnormally enlarged veins in the scrotum that often cause significant scrotal pain and discomfort, and may even contribute to infertility.

Varicoceles typically occur because of dysfunctional valves causing backflow and pooling of blood in the distended scrotal vessels. Decreased sperm counts can also occur due to pooling of blood in the dilated veins which increases the local temperature around the testicles. Treatment of the varicocele thus treats not only the scrotal discomfort, but can also address an important cause of male infertility.

An IVC® physician explained to Rob Jr. that his varicocele could be easily and safely treated with a state-of-art, nonsurgical procedure called embolization. Varicocele embolization starts with the insertion of a thin flexible hollow catheter into the abnormal veins using x-ray guidance. Tiny coils and a sclerosant liquid are then injected through the catheter into the abnormal veins, permanently blocking them and eliminating the source of discomfort.

Over time, these abnormal veins shrink and disappear following treatment. The procedure is performed in a same-day, outpatient setting and does not require general anesthesia. Rob Jr. was relieved to learn of the lower risk of complications and shorter recovery as compared to traditional surgery. Since embolization is a minimally invasive procedure, only intravenous sedation is needed during the procedure as opposed to general anesthesia. The short recovery time allows most patients to resume most routine daily activities the same day following treatment.

Over the past several years, Rob Sr. has suffered from prostate issues, specifically an enlarged prostate also known as Benign Prostatic Hyperplasia (BPH) that was curtailing his ability to fully enjoy the activities he loves.

“My prostate makes my life revolve around my bladder and the closest bathroom,” Rob Sr. says. “I get up several times a night, and I have to decrease my fluid intake if I can’t be near a restroom even for a few hours.”

This is a common story the IVC® professionals hear from men of Rob Sr.’s age — frequent urination, a weak urine stream and incomplete bladder emptying.

The prostate gland is normally a walnut-sized gland that is part of the male reproductive system. The prostate enlarges as a man gets older, perhaps related to changing hormone levels that occur naturally with aging. In most men, this does not present any issues. However, in others, this enlargement can cause pressure on adjacent structures like the bladder and urethra causing problems with urination. The urethra becomes constricted by the enlarged prostate gland and the bladder is unable to empty effectively. Symptoms often include frequent urination and urgency to urinate, weaker urine stream, and incomplete bladder emptying. This condition usually develops in about 50 percent of men in their 50s, and in as many as 90 percent of men in their 70s and 80s.

Traditionally, BPH has been treated with surgery that comes with a prolonged recovery time and risk for complications. Alternatively, IVC® professionals suggested that Rob Sr.’s BPH could be effectively treated with minimally invasive, non-surgical treatment called Prostate Artery Embolization (PAE).

PAE is a safe, non-surgical, minimally-invasive procedure that starts with insertion of a thin flexible hollow catheter into the arteries that supply the prostate gland under x-ray guidance. Tiny microspheres are then delivered through the catheter into the arteries, permanently reducing the blood supply to the prostate gland. Because the tissue of the prostate is deprived of oxygen and nutrients, the gland eventually shrinks and the symptoms resolve. The procedure is performed in an outpatient setting and patients go home the same day. Only intravenous sedation is needed during the procedure. No general anesthesia is required. There is a short recovery time and most patients resume normal activities within just a few days.

Another key benefit of Prostate Artery Embolization is the preservation of sexual function, which can often be negatively impacted following traditional surgery. This procedure is an excellent option for patients who do not wish to have surgery or who are not candidates for surgery or other medical therapies.

Soon after consulting with the staff and physicians at IVC®, Rob Sr. and Rob Jr. completed the recommended minimally invasive treatments with excellent results.  As with so many other patients, the IVC® team felt privileged to treat this father and son pair, offering tailored minimally invasive, state-of-the-art therapies for each of their relatively common vascular conditions.