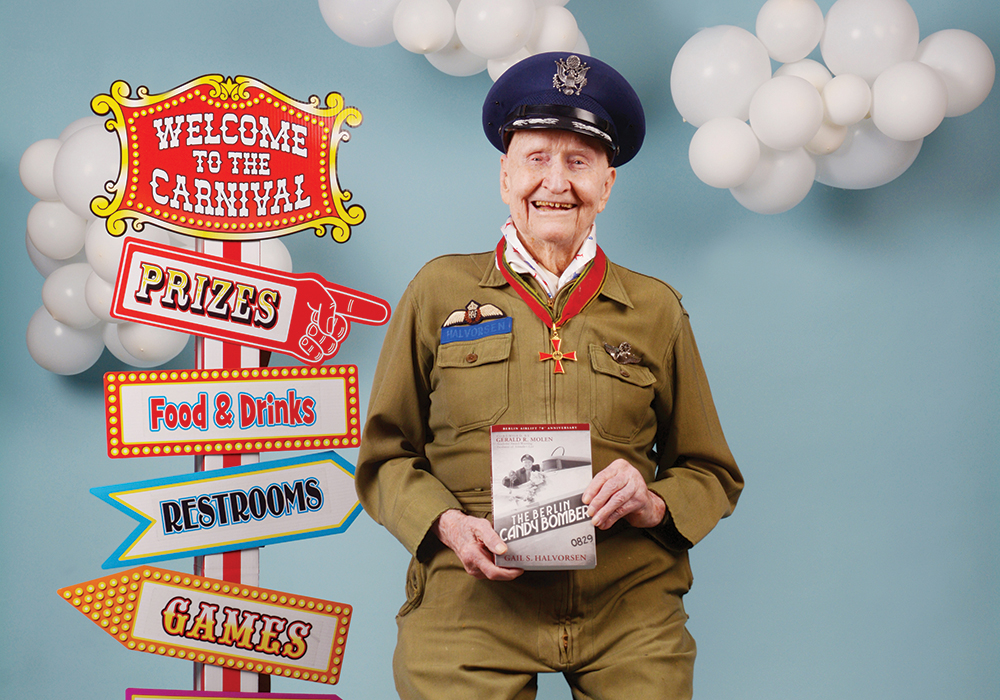 An action-packed century can’t be summarized in one Fab 40 article, but luckily, plenty has been written and documented about Gail Halvorsen’s life as the Candy Bomber. This grandfather of 24 and great-grandfather of 60 celebrated his 100th birthday in 2020. Gail wore the same military jumpsuit to our Utah Valley Magazine photo shoot that he was given in the 1940s when he enlisted. He walked into our photo shoot (no wheelchair needed) after recovering from Covid in the assisted living center where he lives — and where he relives his life as a military leader, joy creator, news maker and horse lover. Gail charms everyone he meets, just as he did on the screen in the full-length film “Meet the Mormons.” He tells his own version of his miraculous and service-filled stories in his autobiography (pictured). After giving away his only two sticks of gum to children behind a fence in Germany nearly 80 years ago, he has lived up to his nickname by dropping candy from airplanes hundreds of times at events around the world and at annual ceremonies in Kitty Hawk, North Carolina.

Top of the Ferris Wheel “Before the war, my friends and I each put in $50 and bought an airplane. We flew all over Utah in that plane.”

Clowning Around “As a kid, my favorite recreation was trying to ride my brother’s horse when he wasn’t there to stop me. It was a slow horse, but I’d get on him and head up the lane.”

Sweet Suggestion “My parents taught me to avoid alcohol and tobacco. In the military, a lot of the guys would drink. I was the odd ball out. I played ‘Pass me the candy.’”

On Stilts “I admire Lindberg who was the first to fly across the Atlantic. That took courage.”

Merry-Go-Round Moment “It brought me great joy to drop candy to the children in Berlin. I’ve met some of those children again throughout my life. I’ve done candy drops in Bosnia, Albania, Japan, Guam, Iraq and all over the United States. This was as rewarding to me as my professional career, which included being Air Force Commander in Berlin where I was stationed with my family for several years. I am also a proud recipient of the Congressional Gold Medal.”

Grand Prize “I love a problem to solve. And horses. I have always loved saddling up a horse that can outrun anybody on the block.”

Firework Finish “My goal is to persist to the end. I enjoy people and will keep sharing stories until I can’t speak anymore. Life is wonderful.”