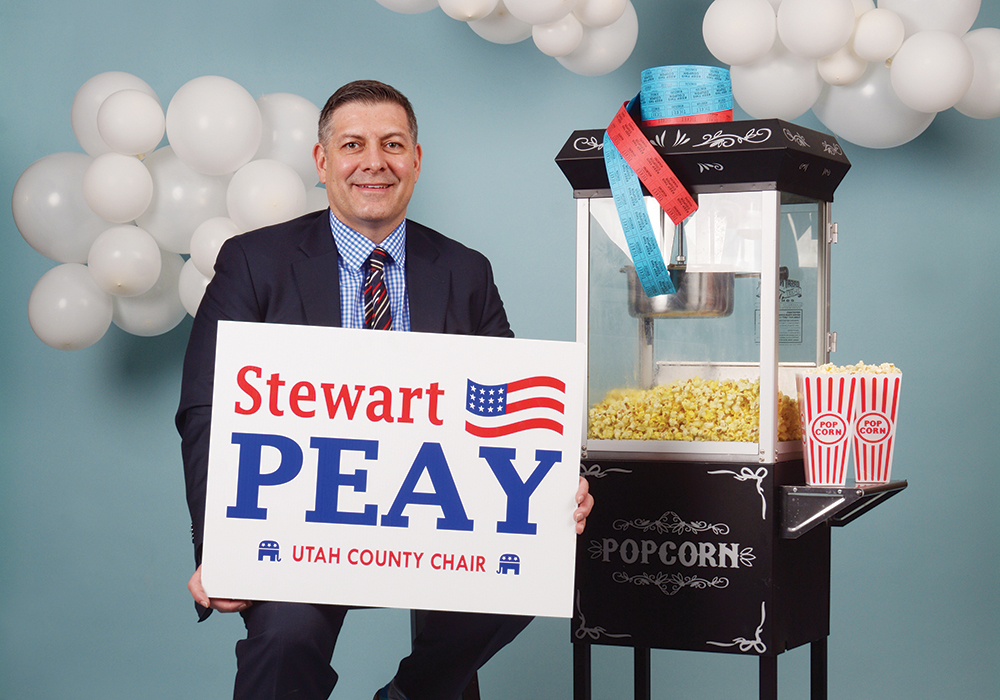 As a missionary in Russia in the 1990s, Stewart Peay watched the economy fall apart, especially in the town he lived where everyone worked for a steel plant that shut down. He later chose to study economics (and then law) largely because of his front-row seat to economic devastation. Ironically, Stewart grew up in a community that also saw a steel plant shut down. But when Geneva closed its doors, Utah Valley moved forward with technology and gusto. Stewart’s passion for the community led him to his current role as Utah County Republican Chair. His out-of-county experiences include running intelligence operations in Baghdad and arguing cases in front of Utah’s Supreme Court.

Top of the Ferris Wheel “We increased voter turnout in Utah County by 13 percent, and we pulled off the first virtual convention in state history.”

Merry-Go-Round Moment “I would love to relive coming home from Iraq. I left on my daughter’s second birthday, and I returned on her third birthday.”

Carnival Craving “Cotton candy. And it’s not close. I’ve stopped at Steel Days by myself simply to buy cotton candy.”

On Stilts “I look up to my dad, who is also involved in politics. He’s willing to make tough decisions and then stick by them.”

Grand Prize “Skiing. I grew up skiing at Sundance and we also enjoy Snowbird and Park City.”

Kettle Korn Quirk “I go to football games 1 1/2 hours before kickoff. I have missed very few BYU games in my life.”

Rickety Ride “My daughter was born deaf, and we have worked her through the cochlear implant process.”

Sweet Suggestions “It doesn’t matter what you are. Just be good at it.”