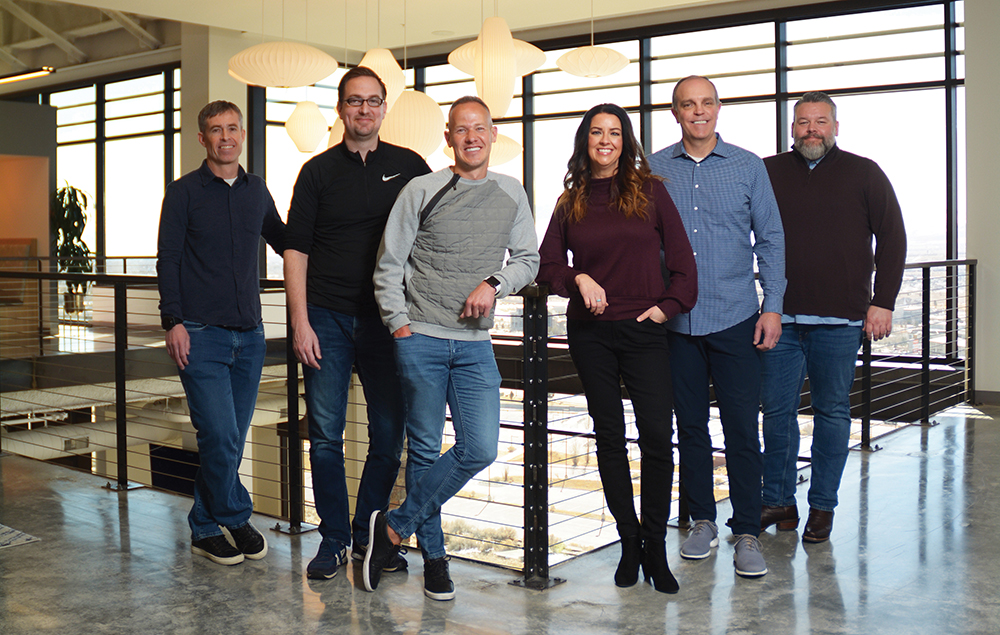 Exactly one year ago, BusinessQ sat in Lendio’s Lehi office interviewing Brock Blake for this very article series — The Q Awards. He was our 2020 Entrepreneur of the Year, and the story detailed his leadership in creating FundingUniverse (connecting tech entrepreneurs to angel investors) and eventually pivoting it to Lendio (connecting brick-and-mortar businesses to loan options).

Lendio was “fueling the American dream,” and with a $55-million funding round from Mercato Partners in February 2020, they were all powered up with everywhere to go.

But you know what happened next.

“It was unlike anything I’ve experienced in my career,” says Blake, of the Covid-19 March shutdowns. “The rug got pulled out from under us.”

Adds co-founder Trent Miskin: “We had taken such care to give our employees a vision and plan for the next year. And when it hit, it hit hard. It all feels like such a blur now.”

When the pandemic started, lending everywhere hit a stop sign. And if there’s no one to lend to, Lendio doesn’t have a business model.

“We went from tremendous growth to zero,” Blake says. “Overnight.”

Scary. Nerve-wracking. Confusing. The executive team was feeling it all.

During that time, Blake was also spending much of his efforts with fellow leaders at Silicon Slopes working to ramp up testing and secure PPP equipment for health care workers.

“At that point we didn’t know the short term or the long term of the situation,” Blake says. “We were just doing our best to be influential to both our team and our community.”

A New Kind Of PPP

In the middle of the chaos, news of an upcoming stimulus package for small businesses hit the airwaves. Companies would be able to secure a government loan — called the Paycheck Protection Program — and every bank, credit union and fin tech lender would be able to participate in funding those loans.

“When I heard that, I took a step back. I knew this was going to be our moment, our opportunity,” Blake says. “That night, on March 26, I texted our executive team the following Winston Churchill quote: ‘To every man there comes in his lifetime that special moment when he is figuratively tapped on the shoulder and offered a chance to do a very special thing, unique to him and fitted to his talents. What a tragedy if that moment finds him unprepared or unqualified for that which would be his finest hour.’

And then I texted: ‘Every small business owner in America is going to get a loan. Instead of doing layoffs, let’s go all in.’”

Armed with that $55-million funding, Lendio got aggressive, pressed on the gas, and hired a staggering 250 people.

When Lendio first decided to go “all in,” they didn’t even know what that meant. The details of the PPP hadn’t been released — or passed in Congress. So while they waited, they focused on onboarding their 250 new employees, working with lenders, building tech, anticipating problems, and preparing their site to handle the influx of applications.

The day before the program set to launch, Blake was frustrated with the rollout and the lack of details and communication. He took those frustrations to social media.

“I essentially tweeted that it was a disaster — and my tweet got picked up everywhere,’ Blake says. “In the next 48 hours, I was on CNN twice, on CNBC, and had quotes in pretty much every single publication out there.”

That tweet thrust Lendio into the spotlight, and on the first day of PPP, Lendio got more applications than their previous two years combined.

The months that followed would be filled with the sighs and lows that come with running a brand new program in the middle of a pandemic.

Blake and his team dealt with 300+ lenders; worked to secure funding from elsewhere when those 300+ lenders were done taking new applications after just three days; and made sure Lendio’s website could handle the high traffic (spoiler alert: it never crashed once).

“I’m so proud of my team,” Miskin says. “It was pure chaos, but they figured out how to keep a site up when it was getting 50x the amount of normal traffic. We’re the only site that didn’t have major downtime through all this.”

They also fielded text messages, emails, and DMs from worried family members, friends, clients, congregation members, and acquaintances of acquaintances. Amidst it all, the team worked 20-plus-hour days, and from April to July, Lendio processed $8 billion of loans for more than 120,000 businesses. (At present? They’re at over 216,000 loans facilitated.)

“Our motto has always been to fuel the American dream; it quickly became to save the American dream,” Blake says. “This experience was 10 times harder than anything I’ve ever done. It’s also one of the things I’m most proud of.”

Many of those employees are temporary, hired for the purpose of helping manage the PPP whirlwinds.

“We can’t say enough good things about the quality of hires this year,” Miskin says. “Even though many have been short-term, their impact has been phenomenal.”

After the first round of PPP loans, Lendio let go of 100+ temporary hires. Blake and CRO Ben Davis were heartbroken to share the news — even though both parties knew it had been the plan all along. But to their surprise, the employees thanked them for the opportunity to work at such a great company during a pandemic.

“Best firing call ever,” Blake laughs. “But the even better part? The government announced the second round of PPP a few days later, so we got to call them all back and say, ‘Just kidding! You’re hired again!’”

What keeps Lendio’s team passionate is their mission.

“You have to have something intangible to keep people on your team,” Miskin says. “There is always going to be someone who pays more. A better strategy is to build loyalty with a culture of caring.”

“When people are part of something meaningful, it’s amazing what they can accomplish,” Blake adds. “When our customers needed us most, we rallied. And we’ll be a better organization because of it. That fight and determination will always be a part of Lendio’s fabric.”

“We had a deal in place with a capital firm to fund 40,000 clients, and they were going to fund the deals in 10 days. Five days came and went. Eight days came and went. Ten days came and went, and we thought, ‘What is going on?’ I got a call saying they had a locked capital commitment, and they couldn’t fund these loans after all. We’re talking $3.5 billion dollars! I was sick to my stomach and in the fetal position on the floor feeling the weight of the world. My wife came in, helped me up, and told me everyone was praying for me. We went into solution mode, and I started calling everyone I knew saying, ‘Hey, can you give me $3.5 billion?’ Eventually, the firm figured out how they could fund the loans, but I’ll never forget our team coming together to problem-solve the impossible.”

The last year in a WORD — plus why they love Lendio

“AMPLIFICATION. We’re mission-driven; fueling the American dream for small business owners drives everything we do, and we are fortunate enough to see the impact of our work on a daily basis.”

“REWARDING. No matter what new challenges we face or what mountains we need to climb, the work we do to help small businesses thrive makes Lendio one of the most meaningful experiences I’ve ever had.” — Karen Peterson, CMO

“EXHILARATING. It’s been an honor to help business owners — especially during this very unique year.”