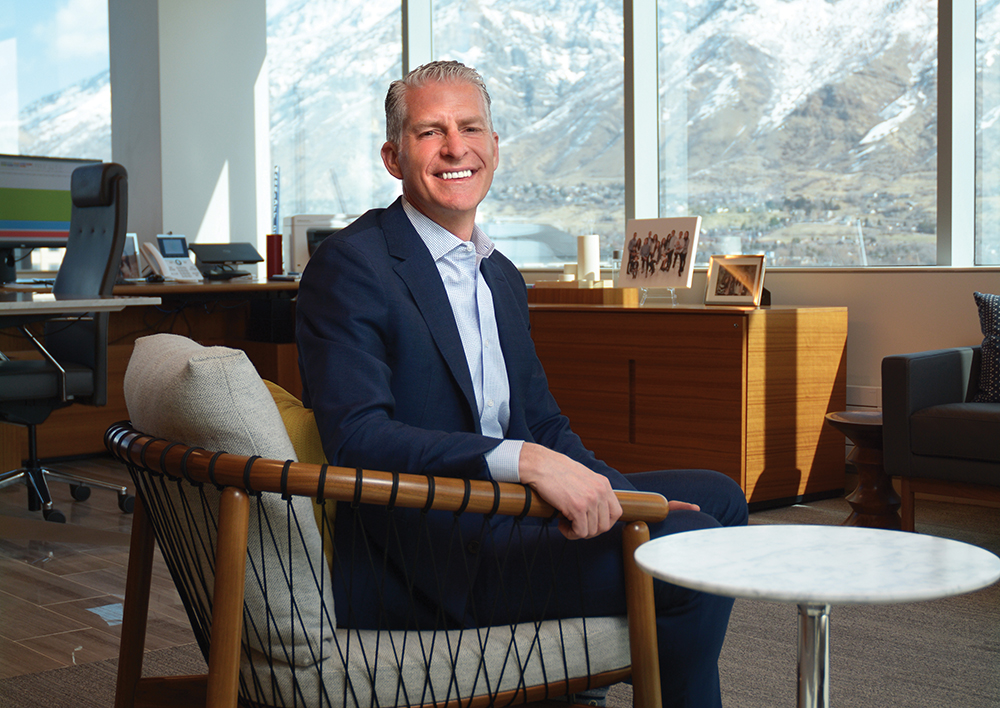 The year was 1989, and Ritch Wood and his wife were moving to Utah from Ricks College. When they arrived in Provo, they stopped to see one of the only people they knew in town — Burke Roney, who had been Wood’s LDS mission companion in Italy. Roney, along with family members and a few friends, was starting a company called Nu Skin, which was housed in a small brown building in downtown Provo.

“Burke said to me and my wife, ‘Why don’t you clock in so you can help us and get paid while you’re here,’” Wood recalls.

Roney filled out a timecard for the Woods and punched them in.

The future CEO was caught off guard but began working in a corner — but not a corner office. Wood was employee 13 or 14, and his wife started filing in the sales tax group.

“And by group, I mean there was one person,” Wood laughs.

Wood set aside his plans to teach at the MTC and to be a landscaper on BYU’s campus to keep punching in at Nu Skin.

After a couple months, he walked down the hall to talk to Keith Halls, who was one of the founding partners. Halls was using a 10-Key calculator, and while the two were talking the tape rolled off his desk and wrapped around the room.

“I told him I could put that information on a computer, and he liked that idea and asked me to start right away,” Wood remembers.

This young number-cruncher continued studying accounting at BYU and putting those skills to work at the fast-growing direct sales company in between classes and homework.

“Some of my first tasks were doing a spreadsheet on commissions and then I began reconciling the accounts,” says Wood, who finished his master’s in accounting while counting dollars (billions of them) for Nu Skin.

“I continued to get more and more responsibility. Nu Skin has always been good to me, and I’ve tried to return the favor,” Wood says.

Even though Nu Skin had been his generous home since the fortuitous and spontaneous visit to his mission companion, Wood wanted to fulfill his goal of becoming a CPA. At the time, the process required him to work in public accounting. So Wood left behind Nu Skin — but the company still ended up being in his upline.

Wood took a job with Grant Thornton in Salt Lake City, and this accounting firm was hired to conduct tax work for Nu Skin. From this outside vantage point, Wood helped his former employer account for depreciation and other financial details as the company moved into their current high rise in 1991.

After two years working on Nu Skin — but not FOR Nu Skin — Wood returned to the Provo headquarters and managed tax work for the company for two years before his life took a turn for the adventurous. Wood was helping Nu Skin set up the European operations and he was looking to hire an accountant for the new office.

On a trip back from Europe to the United States, his boss asked him to consider taking the job himself. He and his wife decided they were “all in” and lived in Holland from 1995-1997 while opening eight European markets for Nu Skin.

Wood was no stranger to the continent, having served his mission in Italy and taking a job for six months afterward with his mission president in Paris. The Woods took three young children with them to Holland, and then moved back just before their next child was born. The Wood kids were starting to discover their interests, and the family felt it was time to return to Utah County. Wood’s next roles included being controller for Pharmanex (a Nu Skin subsidiary), then vice president of new market development.

“I was in China every month for three years,” Wood says.

The young family briefly — very briefly — considered moving to China. When they decided against that idea, the CFO at the time decided to be the one to move to China, leaving behind his open desk. Wood became the CFO in 2002 at age 36.

“I’ve had 14 titles at this company in three decades,” Wood says. “I wasn’t one to overly promote my resume or push myself on upper management. Rather, I worked hard and always earned the trust of the team. I’ve put my best foot forward in every seat I’ve had.”

Hail to the Chief

As Wood transitioned from CFO to CEO, the square footage of his office expanded — as did his perspective.

“A CFO is focused largely on the past and what happened in previous quarters,” Wood says. “As the CEO, my mind went to how we could build this company into something much better three years from now. I immediately became focused on my vision for the future.”

One challenge he faced as CEO of a legacy company is that momentum and fire can be difficult to maintain over decades. Nu Skin’s focus from 2007 to 2015 was on anti-aging. This was a perfect message for the sales leaders who came on board in the 1990s when they were in their thirties. But Wood wanted to re-imagine the business in a way that would draw new and younger leaders.

“Today, Nu Skin has become all about the customer — a younger customer,” Wood says.

Along with this shift in target demographic came the complex equation of figuring out how to meet the demands of today’s marketplace, including free shipping (thanks, Amazon) and practically instantaneous commission payouts.

At age 55, Wood will be retiring from the CEO role this fall. But this father of six and proud grandfather isn’t ready to complete crosswords in a recliner and wait for his Social Security check to arrive. In fact, “retirement” isn’t entirely accurate. Wood has plans to help smaller companies capitalize on opportunities in the market — and also to help them overcome problems and hurdles.

“Nearly every young company has a blind spot they need help with — whether it’s in pricing, supply chain, marketing or management,” Wood says. “I feel like I can help.”

As Wood steps down from his final role at Nu Skin, he will miss his viewpoint of Angel Moroni at the adjacent Provo City Center Temple. And he will miss the relationships he shares on every floor and hallway — including Ryan Napierski, who will become Nu Skin’s CEO this fall.

But Ritch doesn’t have regrets.

“I believe our employees know if I can share something with them — whether it’s information or profit-sharing — I will do that. As I step down, I hope the Nu Skin team will say about me, ‘He was one of us. He didn’t act like he ran the joint and that he knew it all. Because I didn’t know it all. But I did love it all. And more importantly, I loved them all.”

WERK IT YOUR WAY

“I want our employees to feel empowered and accountable. I want the work done, but I don’t need to tell employees where to do their jobs and when. What I’ve found is that the younger generation is extremely efficient. They have amazing bandwidth and they know all the tools to use that will make their jobs and their lives easier. They use their time wisely, they work smart, but they want flexibility. We’ve found that 90 percent of our employees are happier with less rigid requirements for office hours. We’ll never be the same again as a company after the changes we implemented in 2020.”

The ABCs — of the Nu Skin Way

CEO Ritch Wood instilled a memorable mantra by following the alphabet of success. Here are a few of his letters of the “law.”

Accountable.. “We empower our people and then hold them accountable — not with a stick, but with the ability for them to report to us,” Wood says.

Customer obsessed. “We want to delight the customer. We make decisions based on who buys our products.”

Fast-speed. “We don’t sit around. We make quick decisions, even knowing it might lead to mistakes. We move fast, but we have seatbelts on to keep us safe as we make decisions together.”

“As the CEO, my mind went to how we could build this
company into something much better three years from now.”