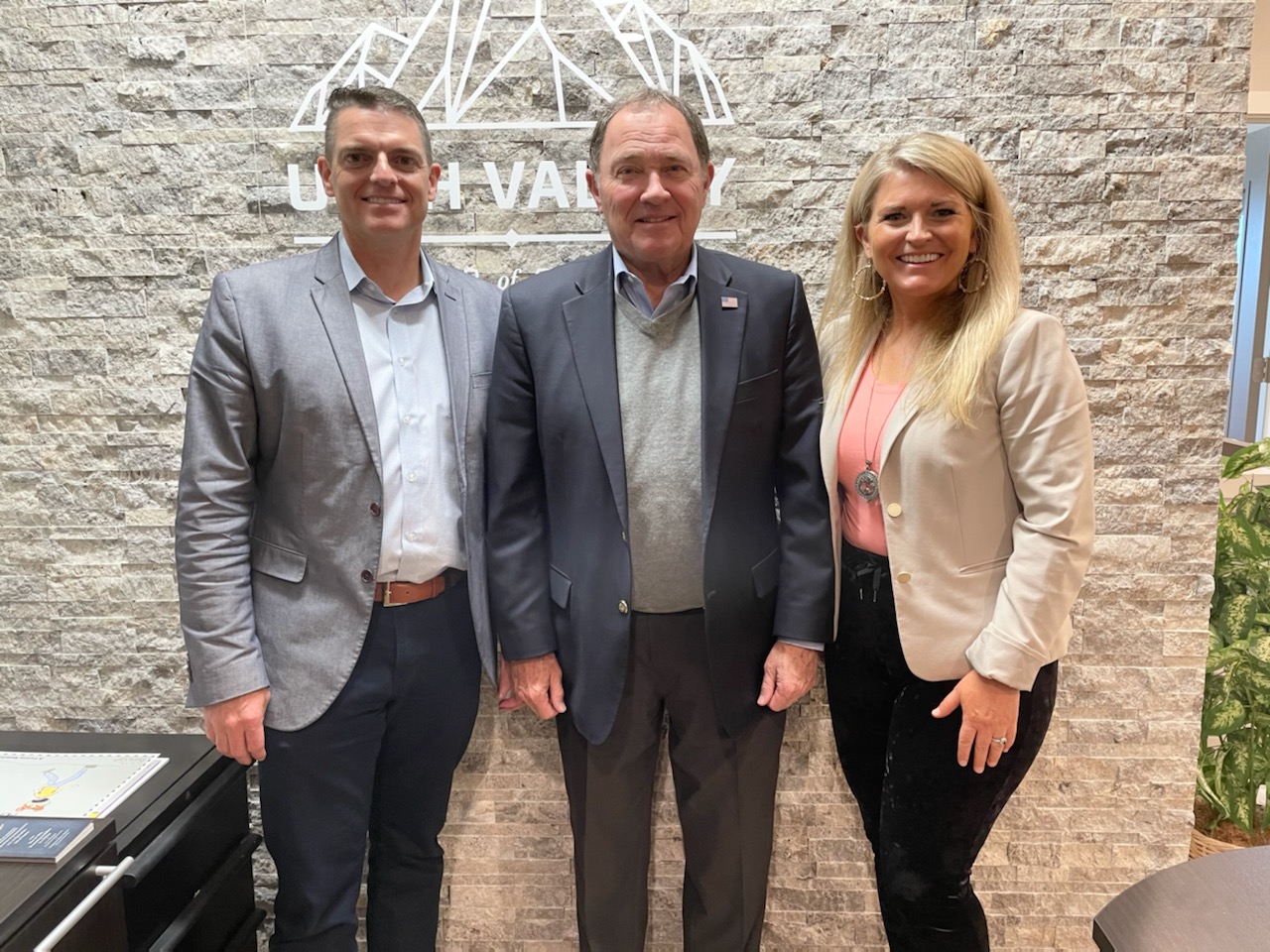 Governor Gary Herbert, center, has been named Executive Chair of the Utah Valley Chamber of Commerce. He will be working alongside Curtis Blair, left, who is the president and CEO of the Chamber. Utah Valley Magazine Editor Jeanette Bennett, right, has been interviewing Gary Herbert for two decades in his roles as Utah County Commissioner, Lieutenant Governor, and Governor of Utah.

When Governor Gary Herbert stepped down as Utah’s governor on January 4, he felt like he was leaving the Super Bowl after the third quarter.
“The pandemic had been all-consuming, and I stepped onto the sidelines during the critical fourth quarter,” he says.
Now he’s back in the game after a quick “water break,” this time on the roster as the Executive Chair of the Utah Valley Chamber of Commerce. Governor Herbert will be cultivating new and existing relationships while assisting in executing the strategic plan for the Chamber.
“Utah County is reflective of the culture throughout the state,” Governor Herbert says. “People talk about it being Happy Valley, and to me it is a very happy place. Orem City is my hometown — it’s Family City USA. My goal with the Chamber is to help businesses and the economy continue to thrive, which in turn creates opportunities for the rising generation to learn, grow and become the leaders of tomorrow.”
After 30 years, 6 months and 5 days in elected office, Governor Herbert will once again be utilizing his entrepreneurial spirit (he has started four businesses) and his network (he was the CEO of the largest business in Utah — the state — with 28,000 employees). He’ll also be utilizing his knowledge of Utah County, where he served as County Commissioner for 14 years prior to his 16-year run as lieutenant governor and then governor of “the great state of Utah,” a phrase he’s known for including in every speech.
Governor Herbert, who turns 74 this week, isn’t wired for a crossword-puzzle retirement.
“My dad used to say that a man needs a reason to get up in the morning — if you retire, you die,” Governor Herbert says. “I’m not a lay around and do-nothing kind of guy, and economic development is my bailiwick.”
The former governor is stepping back into a county he helped shape.
“Look at Saratoga Springs, which I birthed as a county commissioner. Look at Eagle Mountain, which I also birthed as a county commissioner,” he says. “Those two cities will have 200,000 residents in the next 5-10 years. This county is experiencing spectacular growth as the fastest-growing area of our state.”
The Herberts have been watching the growth first-hand as they returned each weekend to Orem from the Governor’s Mansion. As they have driven up and down I-15 for decades, Governor Herbert has watched the economic corridor grow and expand. With the relocation of the state prison — a plan put into action during the Herbert administration — the Wasatch Front is even more poised for economic growth.
“As governor I was always proud to be from Utah County,” he says. “As a sixth generation Utahn, I was born in American Fork, a city that my grandfather founded. My ancestors always made things better for those who came after them. I shared that pioneer spirit in many State of the State addresses. We are responsible to smooth the trail for those who come after us.”
Governor Herbert is looking forward to continuing his legacy of growth and collaboration in this role at the Chamber.
“This is a natural step for me, as I cut down my hours from working 60-70 hours a week to this new position which I’ll be doing alongside my role as grandpa and as husband to a Hall of Fame grandmother who deserves a statue,” he says.
Governor Herbert will long be known for leading Utah as our state led the nation, both economically and also in how the state responded during the pandemic.
“I believe Utah benefited from having an experienced governor in place when Covid-19 hit. I wasn’t a rookie guiding our state through that process,” he says. “And now many lists and media outlets including Glenn Beck, say our state fared the best during the pandemic. Our unemployment was 2.4 percent before Covid-19, it rose to 9 percent, and now it’s back down to 3 percent. We did a lot of things right in this state. I’m a coach who has really good players, and we have amazing people in Utah who get the work done.”
Utah County is leading out and is projected to have 1.6 million residents by 2065, which is also the year we will likely match and exceed the population of Salt Lake County.
“This is the economic hub of business activity in the state,” Governor Herbert says.
From real estate to technology to homebuilding, Utah County is setting records — and Governor Herbert has been watching it since his days as a real estate agent before running for office.
“My future book should be called “Gary Herbert: The Improbable Journey (And I should’ve stayed in real estate),” he says with a smile.
Curtis Blair, president and CEO of The Utah Valley Chamber of Commerce, welcomes Governor Herbert as a member of the executive leadership team.
“There is no individual more qualified in the state, or the nation for that matter, to help Utah County navigate the tremendous opportunities and unique challenges of explosive growth while keeping an eye on economic prosperity than Governor Herbert,” Blair says.
Adding to his big-news week, Governor Herbert will also be awarded Honorary Doctorates on May 7 — his 74th birthday — at both Dixie State University and Utah Valley University.
Share