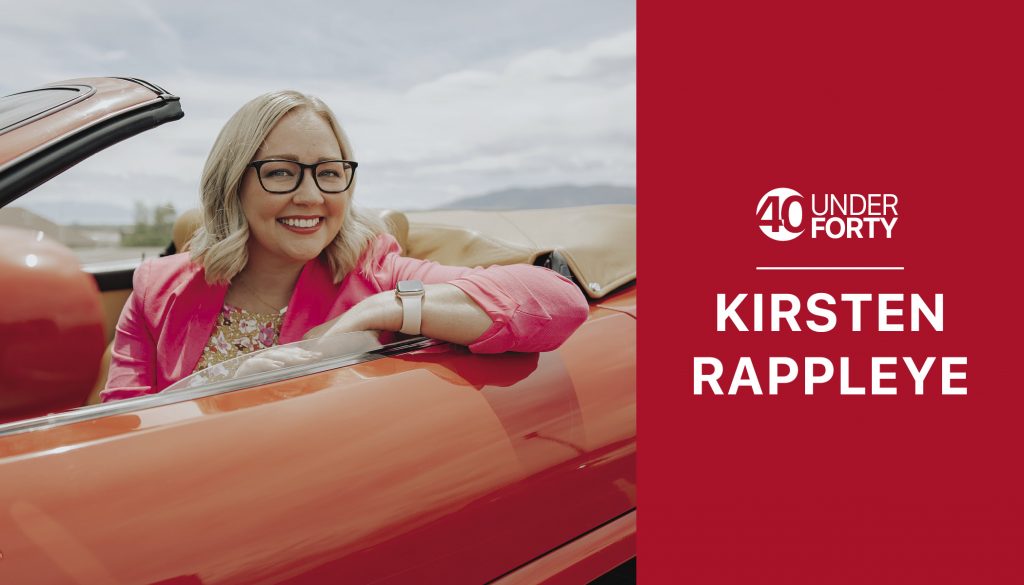 For Kirsten Rappleye, politics is about community. Inspired by her parents’ involvement, Rappleye started as a political intern 14 years ago, interning a total of 5 times for: Utah’s House of Representatives, the United States Senate, and USU. She went on to work for the Utah Senate, was appointed as Public Information Officer to then Gov. Gary Herbert, served as Chief of Staff to then-Lt. Governor Spencer J. Cox, and now serves as Director of First Lady Initiatives with Abby Cox. “Anyone who has a desire and is willing to work hard can make a difference in the public policy sphere,” she says.

PROUDEST ACCOMPLISHMENT Serving as the director of the 2021 State of Utah Inauguration, which was a major undertaking. My team and I put together the inauguration, as well as service projects and TV specials. Executing the events with precision was critical to keeping everyone healthy, and it was important for us to model that safe group gatherings and human connectedness were possible after a really difficult year! Everything went off (mostly) without a hitch because our team collaborated, challenged what’s possible, stayed humble, and relied on each other. LEADERSHIP STYLE Collaborative, with an emphasis on taking responsibility seriously, apologizing quickly, and treating people fairly. WOULDA-COULDA-SHOULDA If I could go back in time, I would tell myself that it’s really important to use your voice, even when it’s uncomfortable — and to create space for others to use theirs. MAIN MOTIVATION Inspirational Utahns shooting their shots. When you work as a government appointed public official, you see a lot of people on their worst days, and you also see people on the days they’re most proud of. It’s such a beautiful view into humanity. I am constantly blown away by the strength and resilience of people we meet. ULTIMATE CAREER DREAM Honestly, I’m living it! Every day I get to work with my best friends to cultivate empathy, connectedness and equality throughout Utah’s communities.