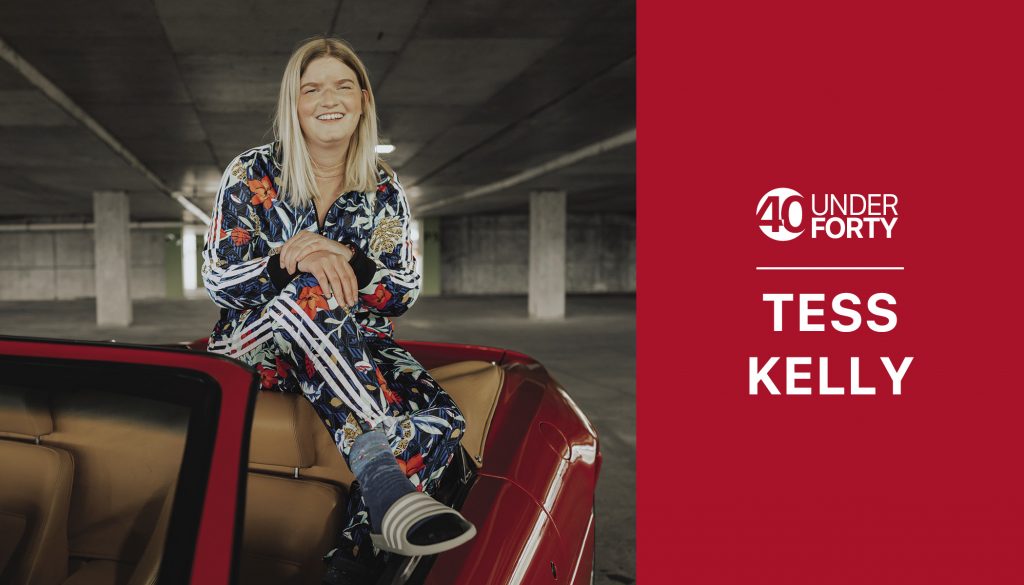 Tess Kelly’s name belongs in lights. She’s worked in Utah’s entertainment industry as a producer and production manager since 2013. She graduated from BYU in Media Art Studies. She was a line producer for Studio C during seasons 8 and 9, and she took the talented cast and crew to New York City in August 2018 and recorded a special premiere episode with SNL’s Kenan Thompson. She’s directed several music videos for Vocal Point and directed episodes of “The American West.” Oh, and Jeff Goldblum called her Jethro once. “That was funny. He’s a very nice person.”

PROUDEST ACCOMPLISHMENT I’m working on enjoying my accomplishments, so I’ll share a small one. I brought my dog Newman to set for a BYUtv Random Acts promo and he performed perfectly. I was very proud of him, because I knew there was a high chance of it not going well. LEADERSHIP STYLE I like to make it clear that I’m in charge while also allowing others to flourish. If I’m choosing to invest my time and energy into a project, I want to make sure other folks have the opportunity as well. WOULDA-COULDA-SHOULDA I’d definitely like to try to be a better champion for myself and others. I’m growing in that way. WHEN THE GOING GETS TOUGH I take the time I need to work through it and then discuss the ways to solve it with a team. I’m also very close with my family, who also work in the industry. So if it’s a big one, I’ll reach out to them, too. MAIN MOTIVATION Food, family and fun. ULTIMATE CAREER DREAM I just want to work with excellent people and create environments that are safe for them that’ll allow them to create what they need to. Ava Duvernay, Issa Rae and JJ Abrams are folks in the industry that have done that, and I hope to bring that to my community someday.