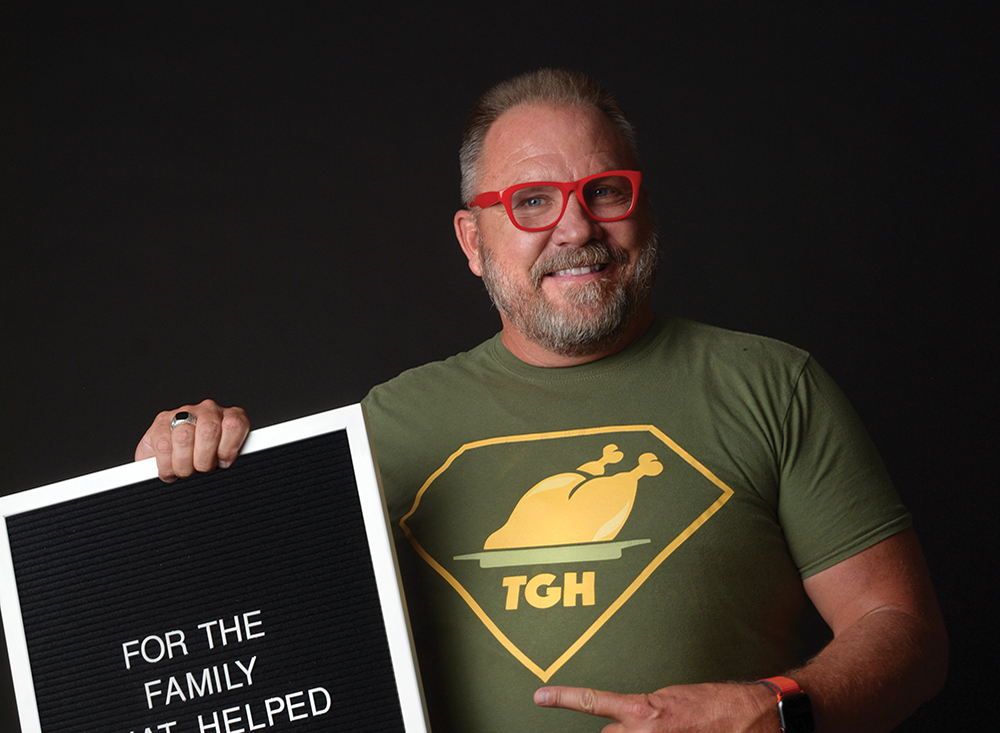 His main source of food was school lunch. For him, Thanksgiving break didn’t mean fresh rolls, gravy boats and leftover turkey sandwiches. It meant he was hungry.

Then, the Christiansons, a family from his church, invited the Adams family of six to spend two weeks in their empty home while they were visiting relatives in Utah.

“I remember pulling up to their neighborhood in Kingwood, Texas, and to me it seemed like kings lived there,” Rob recalls. “They had a big picture window with a tall Christmas tree in the middle of it. It looked like a house from the movies.”

Rob remembers how he felt when he entered the home and saw the presents under the tree with his family members’ names on them. But, more than anything, he remembers seeing a full refrigerator and pantry.

“They told us the house was ours while they were gone,” he says. “We could eat whatever we wanted. I couldn’t believe it. These people didn’t know us, yet they were opening their home to us. I had never been exposed to such generosity.”

Right then, he told his mother that if he was ever “rich,” he was going to do something like the Christiansons were doing.

Fast forward about 30 years and Rob had worked himself into a successful Utah real estate career. He was still talking about that Thanksgiving years ago and about how he wanted to do something like that.

“My mother, who had brain cancer at the time, said I needed to stop talking about doing it and do it already,” Rob says. “It was one of those slaps in the face the way only mothers can do. So, I did.”

Seven years ago, Rob and some real estate colleagues wanted to supply food for children and their families at Thanksgiving. He wasn’t sure where to start or how to identify the right children, so he reached out to Nancy Ward at Jordan School District.

“She worked through the whole thing,” Rob says. “So many people came through and I didn’t even know them. This was truly strangers helping strangers.”

Eventually, release forms were signed, names and addresses were identified and food was ordered. Rob negotiated delivery and discounts with Associated Foods, while Nancy oversaw logistics. His goal that first year was to feed 10 families.

He fed 755 families in year one — and his non-profit organization, Thanksgiving Heroes, was born. Last year, 400 meals came to Utah County alone and benefited students from Alpine, Nebo and Provo school districts.

“Every year, we set higher goals,” Rob says. “The goal for this year is 2,500 families throughout Utah.”

The real secret sauce to Thanksgiving Heroes comes from something the Christiansons knew more than 30 years ago. The giver is blessed by the experience as much — or more — than the receiver.

“Both parties get so much out of this experience,” Rob says. “The people delivering the food to families come back year after year and ask what else they can do. It is such a great part of their holiday season.”

In fact, even as the organization has grown and Rob is busier and busier with its administration (while maintaining his real estate business), he still asks staff members to save a few especially compelling families for him to deliver to.

“That’s the best part,” he says. “Getting to interact with the families and getting to know them is what makes the rest of the work worthwhile.”

One lesson Rob has learned is you never know which families are in need. He has delivered to a family in a large house — which he is expertly able to assess based on his career — only to find out that the father has cancer and the family is without consistent income.

“It makes you grateful for what you have and reminds you that it can go away, too,” he says. “It also brings empathy into your heart.”

Rob believes more empathy is what gets people out making the community a better place.

“That’s a big piece missing in our world today,” Rob says. “If we could see things through others’ eyes, we would have less contention. There would be less ‘us vs. them.’ We would all benefit from connecting and feeling empathy.”

Thanksgiving Heroes is always looking for donations and volunteers. Visit thanksgivingheroes.org to donate or to contact them about volunteer opportunities. It costs about $80 to supply food to each family (a list of what that $80 buys can be found on the organization’s website), so cash donations are always welcome. However, Rob knows there are plenty of other ways for people to get involved with meaningful causes. To him, that’s what’s most important. “I remember sitting in the living room while my dad was watching the news,” Rob says. “He would see something terrible happening and would say, ‘Someone should do something about that.’ All of us sitting passively on our screens isn’t going to change our world. We have to get up and do something — anything.”

How Prepared was the U.S. for Online Learning? Next post