Home Main Pedaling through her 60s

Pedaling through her 60s 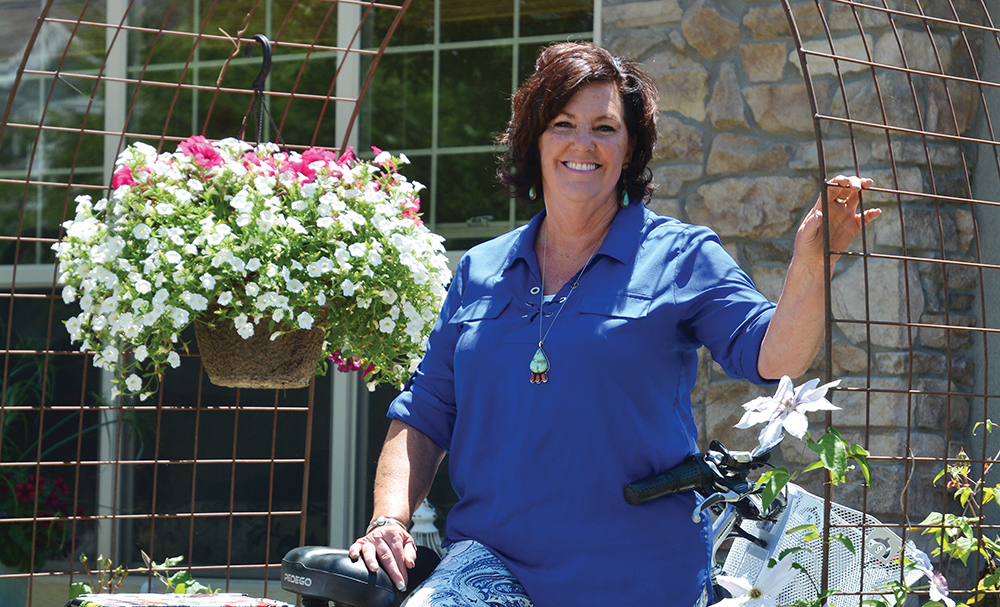 Ali Johnson’s husband used to say, “That’s my girl!” He encouraged her to fly high, and when she had crash landings, he would “do the maintenance” and fix her wings.

When he died at age 49, Ali became a widow and an empty-nester the same week as her youngest son left on a church mission just days after the funeral.

It was all she could do to breathe in, breathe out.

“I didn’t think I’d be alone as I grew older,” she says. “I just knew my high school sweetheart and I would rock together on the front porch while we watched sunsets.”

But in truth, Ali wasn’t meant to rock on the front porch in any decade of life.

“I live a fast-paced life because I want to,” she says. “When I die, I’ve always pictured myself sliding into home going full speed.”

Soon after Ali became a widow, she took a job at Utah Valley University to work with Val Hale raising money and developing donor relationships. She didn’t make it to the freeway on her first day without breaking down emotionally. But after her tears dried, she threw herself into the work.

She went through reports on donations to the university and found that she knew many donors from living up Hobble Creek Canyon for 15 years. But the names were all decidedly male.

“Where are your female donors?” she asked. “I was told women don’t do that. But I knew that was wrong. I was a woman who was a likely donor. These are my people, and I knew what I was going to be passionate about.”

Ali put together a presentation for UVU President Sederberg and the vice presidents at the time about how women were an untapped resource. She wanted to raise money to start a women’s center, and she called the initiative “Start Something Beautiful.”

In bold fashion, Ali contacted Doris Buffett (wealthy oldest sister of Warren Buffett) and asked her to be the honorary chair for Start Something Beautiful. Doris invited Ali to her home, where Ali presented her with a glass gift made by local artist Tom Holdman. Doris couldn’t tell Ali no, and she chaired the initiative.

The momentum and leadership she provided paved the way for UVU’s Women’s Success Center and Wee Care Center. She was also largely reponsible for the UVU Library being funded and built, as well as securing art both inside and outside.

Making a difference is in the DNA of this mother of three. She was the “plant lady” at WordPerfect where she took care of the greenery throughout the headquarters. She made Christmastime magical for the growing software company. Then she went from “plant lady” to “entrepreneur lady” as she left to start her own business and changed the trajectory of the scrapbook industry as she developed products and sold them to other companies. She was a pioneer in scrapbooking software and was part of the Cricut evolution.

After her paid career came to a close, she served a mission on Temple Square for five years where she greeted visitors with her characteristic enthusiasm and gave them tours and insights about the plants, buildings and religion.

“I shared little known stories of the grounds and was there all day on Sunday and came home with tired feet but a happy heart,” she says.

And now much of her time is spent with her 10 grandchildren and Bike’n Babes, a group of 35 women across the state.

Ali draws from her experiences going to therapy after losing her husband to give wisdom to others who are either single or in a marriage where they feel single.

“Every woman has wings — you don’t have to earn them, you just have to learn to use them,” she says.

Best Part of 60s:
Ali Johnson describes being in her 60s as “the reward for everything you’ve done in life.” She cherished raising three children and is heavily involved in the lives of her 10 grandchildren, but she also loves the flexibility and freedom of not having to get kids up in the morning. “Life is awesome at this stage if you continue to try new things, make new friends and learn things you’ve always been curious about.”

Money & Time
Ali simplified from her dream home so she would have more time and money to travel, learn and have fun. “I want to do things instead of take care of things,” she says.

Wise Words
“Do yourself a favor and live happy and healthy to your last breath. The alternative is to be miserable. Love who you are and take care of yourself, and you’ll be the happiest, healthiest person you can be.”

How Prepared was the U.S. for Online Learning? Previous post