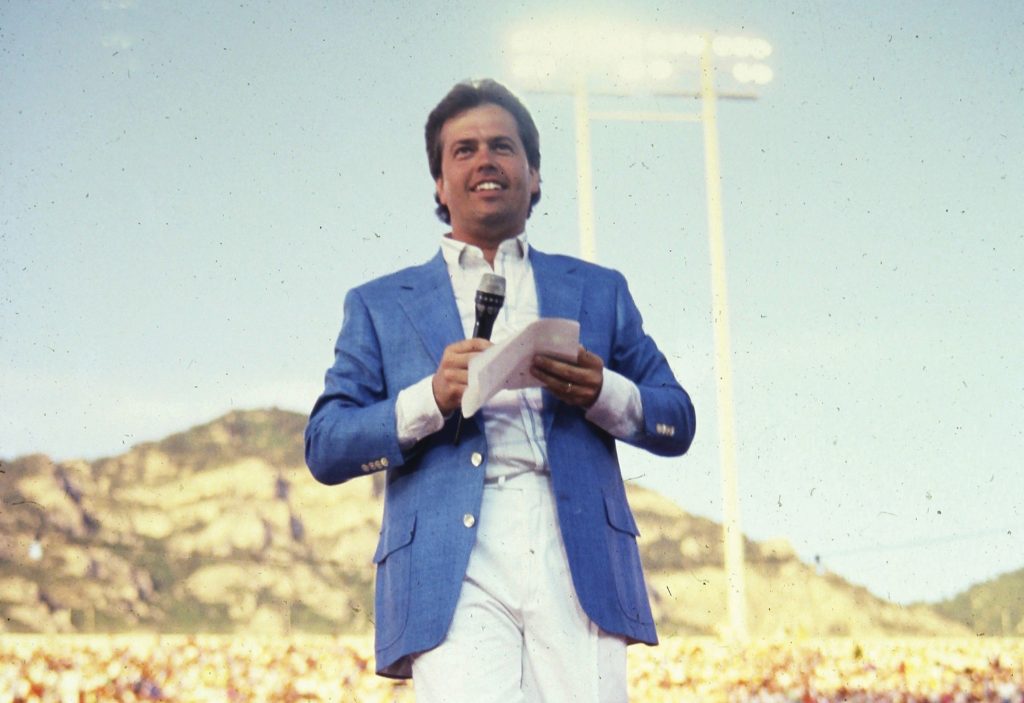 Alan Osmond has been called the “Dick Clark” of the Osmond family.

As the oldest of the performing brothers, Alan was the ringleader, the voice and the composer of many of their hits. The musical family traveled the world but always considered Utah their home base.

“We originally liked the idea of having this be home, and not a place where we performed,” Alan says.

Even so, Alan and his brother Merrill agreed to help with a couple of shows for free more than 40 years ago on the BYU campus in the name of patriotism and love of community.

Alan worked with local event legend Carl Bacon to “put meat on the bones” of the summer event and bring it to life.

The larger-than-life event was a lot of work, and most of that was done in Alan’s basement on Osmond Lane in Provo with a small group of people. The tradition began to solidify and became dubbed the Stadium of Fire. Now 40 years later, it is still known by that totally lit name and its accompanying jingle, written by Alan himself. In fact, Alan has written new songs for the show each year.

“It was really hard to build the momentum for Stadium of Fire at first, and we spent our own money to buy a car to give away at the show for publicity,” Alan says. “I always knew it had to be a visual show with lots of oohs and ahhs. We couldn’t just play a little banjo on the stage. It had to be ‘Wow!’”

And so Alan continued to add fireworks — literally — to the annual Stadium of Fire. Memorable milestones include lighting off a million fireworks one year. He brought Bob Hope to town. He paraded an elephant on the field. And his brother Donny performed, arriving on a helicopter.

Alan’s mind continued to add both consistency and surprises to the show each summer. In true Alan fashion, he always wanted more heat in the Stadium of Fire.

“I wanted it to look like the stage was on fire!” he smiles.

He connected with the local fire department and asked them how they burn down houses quickly and safely.

“They said they were going to burn down an old house in Spanish Fork the next day, so I went to watch. And then I asked, ‘Can you make that flame 10x bigger?’” Alan laughs.

With the help of the fire department and others, Alan created a rain-gutter-like trough that held liquid that could ignite immediately and he used it to surround the Stadium of Fire stage.

There was the occasional mishap through the years — like when a stage hand caught her clothes on fire — but each year the community had the same reaction as they walked to their cars after the Stadium of Fire — “That was a great show!”

Stadium of Fired Up

Although Alan no longer manages the daily details of the Stadium of Fire, he’s one of the trustees of America’s Freedom Festival. He continues to pound the drum of the show being “visual, musical and full of ‘wow.’”

His memories of the show the past four decades include both public and private moments, including the time when the show lost power just as they were ready to “blast off.”

“I dropped to my knees and talked to my best friend and prayed for help with the show,” he says.

Power returned and the show went on. Another year, huge rain clouds were bursting and the show had to be delayed. He enlisted the faith of those in the stadium, and the show was able to begin — with rain showers pouring around the stadium but not in it.

Alan sees every person in the stadium as being integral to the show, and he wants them to have the night of their lives.

“I worry about the little boy up in the corner and I want him to get a good show, and I also want the front row to get a great show because they paid a lot of money for those seats,” Alan says. “The show has to be spectacular from every angle, with lots to see and experience throughout the night.”

Alan and Suzanne, Sitting In A Tree

Alan, now age 72, and his wife, Suzanne, live in central Orem in a comfortable and elegant twin-home. Their lives have twisted, turned and gone 100 mph since they first met back when Suzanne was a BYU cheerleader and Alan watched her instead of the basketball game.

The two dated six months and then had a 13-day engagement so she could join him on his musical tour.

“I had never seen him perform until our wedding night when we flew from Provo to Vegas for him to join his brothers for their scheduled performance,” Suzanne says. “I was thinking, ‘Who are all these screaming girls?’ and I also thought,  ‘My family is never going to believe this!’”

Alan and Suzanne moved to Branson, Missouri, during 5 1/2 of the key years of raising their eight boys. They left behind their 17,000-square-foot home on Osmond Lane in Provo and moved to the entertainment hub where they could perform and then sleep in the same bed every night — a luxury for musicians.

“We had a normal life when we lived there,” Alan says. “The boys went to school and then worked on every show we did. We served in our church and made a lot of friends.”

Alan has suffered from multiple sclerosis for many years, and their predictable life in Branson was good for his health, even though their lives were busy with nightly performances and daily business to attend to.

“Nothing has been what I expected,” Suzanne says.

And to be honest, Alan can say the same thing.

“We are just people — we’re not showbiz people,” Alan says. “We love to sing, and we love to make people happy.”

The Osmonds are notorious for saying a prayer before going on stage, for not working on Sundays, and for performing firesides around the world to share more about who they are and what they believe. Oh, and they’ve sold more than 100 million records “or something like that,” Alan says as an aside.

Through all of Alan’s ideas, melodies and fire experiments, Suzanne has been there through it all.

“From our first date, I came home and said that I had gone out with a ‘real girl,’” Alan says. “She’s always been a driving part of my life. She gave us eight wonderful sons and taught them well. She’s created a wonderful home life — not a show business life. And that has made all the difference.”

The eight sons of Alan and Suzanne have been known as “Osmond: The Second Generation.” And now there’s a strong third generation in town with 28 grandchildren — 15 boys and 13 girls, with one great-granddaughter in the mix as well.

History repeated itself as Alan’s boys found themselves with performing opportunities at young ages. The “second generation” went on a KSL talent showcase as kids. Then they were asked to do a full 30-minute show.

“They didn’t know that many songs, so we taught them some more,” Alan remembers.

The boys took piano lessons from local legends Irene Perry and Kurt Bestor. People Magazine did an article on the boys. Disney saw the article and invited the musical family to do a pilot.

Highs and lows, opportunities and closed doors have been the norm for Alan, who has seen the storyline both as a brother and now as a father.

For example, his boys got to go to Japan to perform. The boys learned how to introduce themselves in Japanese. They rushed back to perform for the state of Utah. They had roles on the Children’s Miracle Network. The boys went to Geneva for a United Nations convention. Life was exciting, fast-paced, and reminiscent of Alan’s earlier years.

During the heart of the boys’ singing careers as a group, they would head to Canada right after the Stadium of Fire for nearly a month of performing in Edmonton and other locations.

“We would stay at the Stadium until 2 a.m. and finish getting everyone paid, and then we would hop in the motor home and head north,” Alan remembers.

Suzanne says he would analyze and deconstruct how the Stadium of Fire went for hours, and then he would start planning the next year’s show while they drove through the night.

“What I’ve learned is that somebody else is in charge, and he knows better than we do what needs to happen, so we just need to prepare ourselves and work hard, and that’s what I tried to teach my kids,” Alan says. “I also wanted them to clean their rooms and listen to their mother!”

The sons are all building successful careers including accounting, non-profit management, music, television and programming development for The Church of Jesus Christ of Latter-day Saints.

After Alan listed off each of his eight sons and shared their life updates, he added with a musical laugh, “And a partridge in a pear tree.”

Everything is a song to this man who has written lyrics, jingles, harmonies and full-length CDs his entire life.

“When I read my old journals, I realize I had the weight of the world on me at a young age. I would teach each of my brothers their parts for the Andy Williams Show. I would work with one boy and write his part and teach it to him, and then he would go do his homework and I’d move on to the next brother and teach him his part.”

“He became an expert, and he can sit down at a piano and play anything,” she says.

Those skills came in handy when young Alan and his brothers were given only two shows with Andy Williams unless they had something new to present. So they learned to juggle, play instruments, wear unique costumes and write songs in five minutes. They became the one-take Osmonds.

The first generation of Osmonds are no longer teen heartthrobs. But they’ve stayed close and continued to create.

“My brothers are my best friends, and that hasn’t changed,” Alan says.

Alan and Suzanne spend their time serving in the LDS temple, hosting and attending family gatherings, writing songs and dreaming up more ideas for the Stadium of Fire.

There will always be another “wow” — and probably more partridges in a pear tree.