A ‘Silent Night’ at Midnight Mass, Christmas and Catholicism 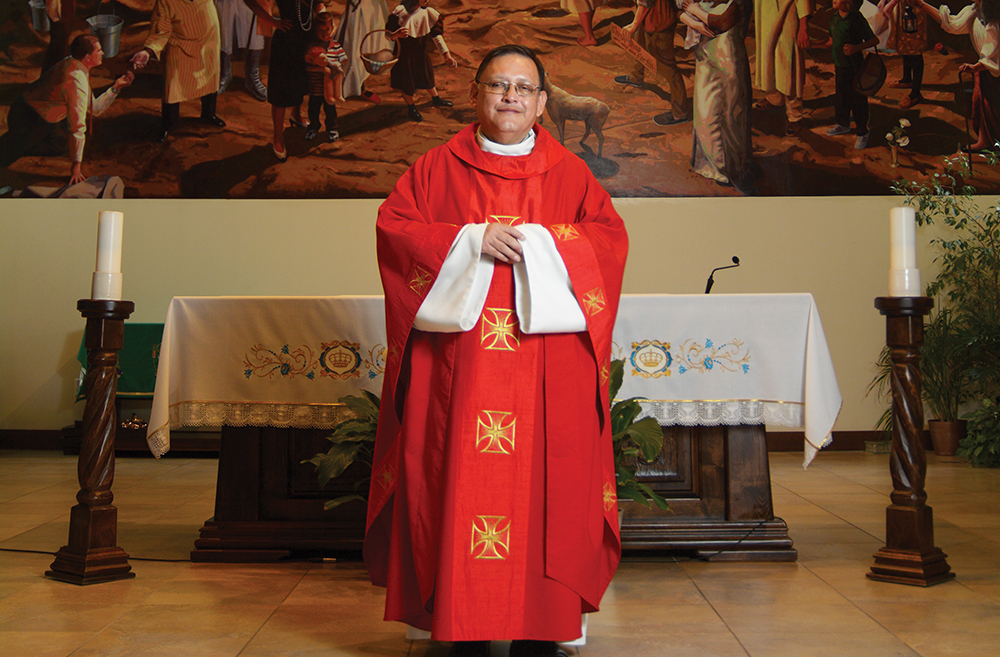 As Father Eleazar Silva opens his mouth to sing for morning mass, the congregation kneels with bowed heads. A man in Hoka shoes and a gray puffer clasps his hands under his chin, eyes closed in silent worship. Father Eleazar’s sonorous, clear voice swirls through the room. This is a simple Monday mass. Christmas mass is even more heavenly.

At 4 years old, Eleazar shadowed a priest in Mexico City and decided he would one day follow in those righteous footsteps. At 14, he left home to join the seminary and follow the plan God had for him. He became a professor at Christian Brothers University; he also became a priest. For 20 years, he has served God and mankind as a Catholic priest, with his two most recent months spent at Orem’s St. Francis of Assisi Catholic Church.

“This is my home,” he says, gesturing to the chapel surrounding him.

Christmas and the Catholic Church are inseparably connected.

“Most Christmas traditions started out in the Catholic Church,” Father Eleazar says.

Christmas caroling originated from the monks and the hymns they composed. The cherished lyrics of “Silent Night” were written by an Austrian priest in the early 19th century.

“For the adoration of the baby Jesus, he composed ‘Silent Night,’” Father Eleazar says.

The German Catholic Church decorated Christmas trees with candles and fruit, which evolved into sparkling lights and embellished ornaments.

In the 13th century, St. Francis of Assisi organized the first life-size reenactment of the Christmas story, beginning the tradition of what Catholics call the crèche — also known as the revered nativity.

The character of Santa Claus stems from the benevolent, philanthropic bishop Saint Nicholas who gave gifts to children and aided the needy. An old portrait depicts him with a bushy beard, draped in red and white robes.

Father Eleazar says that though Easter is the most important holiday to Catholics, Christmas is also crucial; it is a fulfillment of the promises of the Old Testament where prophets foretold of his coming.

“We are saved by the fact that God the Son becomes a human being in the Blessed Virgin Mary,” Father Eleazar says. “That gives us access to the words of God, to the acts of God, and to him. Christmas is that beautiful door that opens, not from here to heaven, but actually from heaven to here.”

Mass is generally a daily service and a time for Catholics to gratefully praise God for his life and death, but Christmas masses take on a special tone.

“The mass in the evening is about announcing the great light that is coming as we see the darkness approach,” Father Eleazar explains. “During mass at midnight, we focus on the inauguration of the actual birth of Jesus. Mass on Christmas day focuses on announcing the consequences of it — the salvation of mankind.”

While each mass focuses on a separate aspect of the nativity, the purpose remains the same: “to announce the birth of the Lord,” he states.

Father Eleazar is grateful to be a tool in God’s hands. His clerical journey leads him to continuously witness the hand of God in his life and the lives of others.

Many years ago, he was assigned to a little church in the outskirts of Mexico City. They didn’t have the time, money or resources to hold an elaborate service, but they wanted it to be memorable. This was the first time this community would experience a unified Christmas mass.

“I have served in elegant cathedrals, but I don’t remember happier people than those in Mexico City,” he says. “I didn’t want to leave. Even the celebration with my family that night was not as joyful and beautiful as it was with those who came to mass.”

At another time, a young girl ran up to Father Eleazar during a Christmas crèche.

“Father! Father!” she cried. “Today is Jesus’ birthday. Can I give him this card?”

He laughed and responded, “Of course!” And there lay baby Jesus next to a Christmas card with balloons. Inside, it read, “Happy birthday, Jesus.”

Orem’s St. Francis of Assisi has around 8,000 visitors each weekend, and Father Eleazar sees Christmas as an opportunity for himself and others to understand Christ’s birth and death on a deeper level.

“My hope for the parish is for people to come and worship at the manger,” he says. “And they do.”

Hopeful Lights in the Dark, Cold Winter: Hindus light the world for Diwali Next post