Celebrating the End of Suffering, Buddhism brings peace on earth 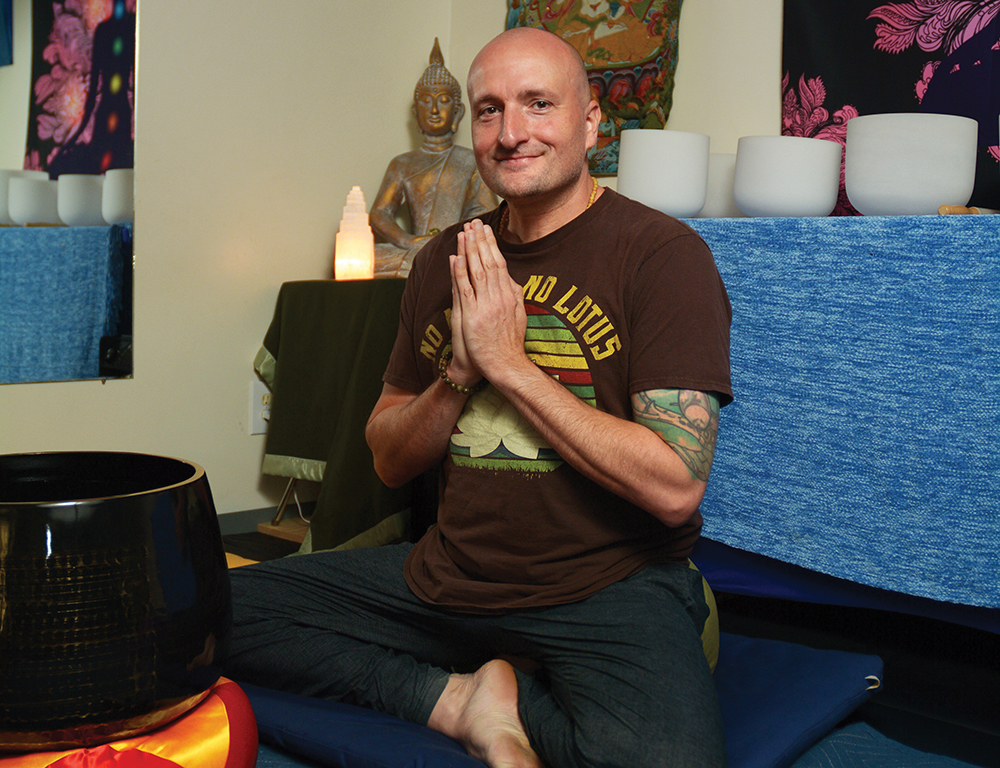 The Buddha sought to the find the end of suffering during his ministry in approximately 500 BC.

Carl Harman, an Orem native, has found healing from his own personal suffering through Buddhism. Celebrating Bodhi Day on December 8 is a way Carl expresses gratitude for the path he found that continuously leads him to peace.

As a teenager, Carl was experiencing the opposite of peace. When he was 16, Carl’s friend died by suicide.

“I had a terrible depression,” Carl says. “Nobody in my family knew how to help me.”

This depression continued to plague him through his 20s and 30s, when he looked to alcohol as an ineffective remedy for his pain.

Unable to find a concrete cure for the darkness he felt, Carl explored religious texts on and off for about 10 years. His love for scripture led him through a journey of Buddhist teachings, Hindu and Yogic texts, even the Quran and the Bible. At that time, he didn’t narrow his focus onto one set of teachings — he welcomed all principles that taught goodness and brought peace to his life.

On January 17, 2019, he was standing in his kitchen reading a book by Buddhist teacher Thich Nhat Hanh, when a significant passage struck him.

“He started talking about how to talk to your suffering, and I’d never learned how to do that,” Carl recalls. “The author said to talk kindly to it.”

Carl thought to himself, “Talk kindly to depression? I hate my depression.”

With some hesitation, he trusted the counsel. Closing his eyes, he breathed deeply and said out loud, “Dear suffering, I know you are there and I am here for you; I will take care of you.”

Almost instantly, something shifted inside of him for the better. He hasn’t had a sip of alcohol since.

That’s what Buddhism intends to do — help people find the course to end their suffering.

Because of that experience, Carl started practicing Buddhism and continues to find refuge in its philosophies. He sees Bodhi Day as a way to express his gratitude for what Buddhism has done for him..

“Bodhi Day is a celebration of the day the Buddha was enlightened, the day the Dharma (meaning ‘the way’ or ‘the truth’) was able to be taught on this planet to help us know how to end suffering,” Carl says.

Bodhi Day demonstrates that there is a way to find stillness for the soul in an ever-spinning world.

Outward celebrations of Bodhi Day are fairly simple. Some Buddhists decorate a small tree with glowing lights to represent the tree under which the Buddha was enlightened. They’ll often meditate longer than usual on this day. This meditation is generally preceded by “inviting the bell” — a large, deep bowl with an undulating, calming sound — and reciting chants.

Sometimes believers will exchange small gifts with each other.

“In Buddhism, gifts aren’t necessarily a bunch of toys and stuff,” Carl says. “It can be just listening to somebody honestly and deeply. It can be seeing somebody with the eyes of compassion.”

Although Carl has found a home in Buddhism, he was raised Christian. He emphasizes that he still loves and reveres Jesus, so he also sets up a small nativity in his home around Christmastime.

“I try to see Jesus as a great teacher,” he says. “I read the Sermon on the Mount, for example.”

Carl also participates in family Christmas parties. He incorporates mindfulness into these parties by making sure he is present in the moment. When he’s socializing with family and friends at holiday get-togethers, his motto is: “whoever I’m talking to is the most important person in the room.”

Whether celebrating Bodhi Day or Christmas, Carl seeks to approach the holiday season with an added measure of compassion, love and gratitude.

“I sit in meditation and celebration, thinking about how wonderful it is that 2600 years ago, the Buddha came to the realization that there is an end to suffering and taught me how and helped me — just some dude in Orem who didn’t know how to live,” he says.

The Story of Bodhi Day
December 8

The story of Bodhi Day is told with many variations. Orem’s Carl Harman describes it this way:

Long ago in present-day Nepal, a prince was born. His name was Siddhartha Gautama. As he was raised, his parents shielded him from seeing suffering in the world — dying people, sick people, even elderly people.

He eventually married and had a son, but he wasn’t happy. Siddhartha’s wife knew it was time for him to find the way, the truth — the Dharma.

For six years he searched, sacrificing his luxurious life to find the end of suffering.

Finally sitting under a Bodhi tree, he meditated for seven days until he reached enlightenment. “His radiance was so amazing that nothing negative could even get close to him,” Carl says with a smile. Siddhartha became the Buddha. He reached Nirvana — the highest level of happiness, tranquility and peace.

A ‘Silent Night’ at Midnight Mass, Christmas and Catholicism Next post