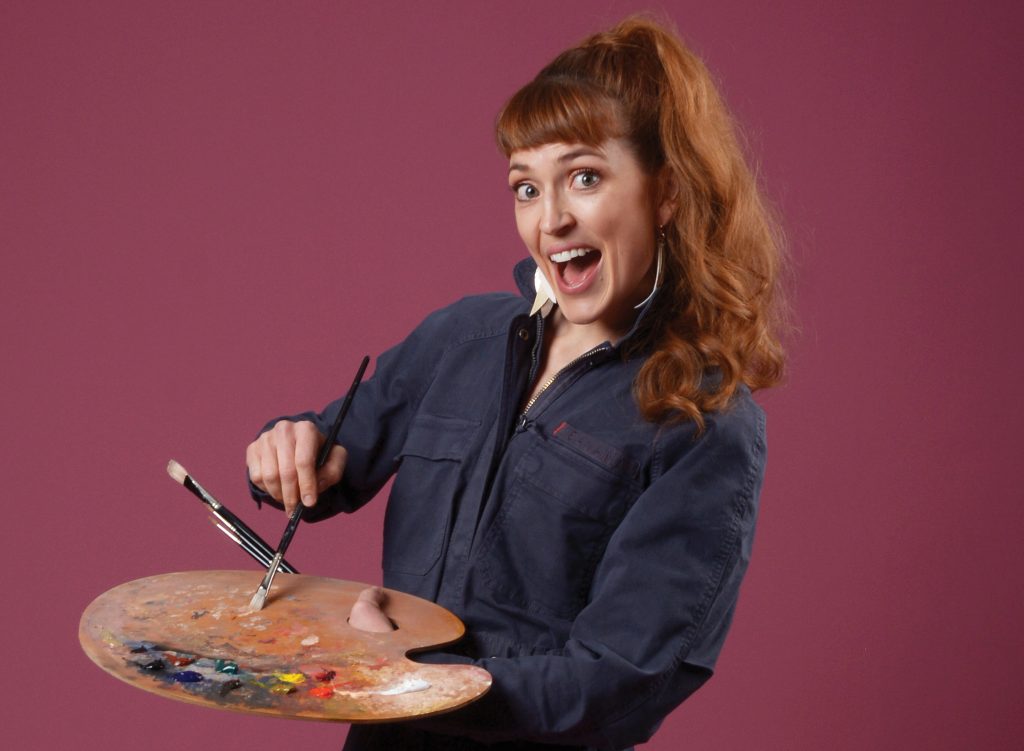 For Jenedy Paige, it’s all in the arms. Her talented hands have created powerful paintings, while her biceps have led her to compete twice on American Ninja Warrior. (Seriously. Give the woman a hand!) Paige graduated in 2006 from BYU-Idaho with a degree in illustration. She began selling original oil paintings on ebay, and soon got into her first gallery. She juggled paintbrushes and motherhood — often getting up at 4 a.m. to work — building her career “over hundreds of tiny moments.” She has since worked her way into more galleries, entered competitions, participated in shows, and worked on expanding her brand. One of her big breaks was being a featured artist in International Art Competition for The Church of Jesus Christ of Latter-day Saints, as well has having art hang in LDS temples (including Payson). She has her own studio space and a thriving business where she paints commissions, teaches painting classes, and manages an online storefront.

Talent is the ability to persist until you get it right.

I’ve won some awards and had my art in magazines, but honestly the coolest accomplishment is being able to share my art with people all over the world. My art is so closely tied to my faith and life experiences. Each piece is like a journal entry. The viewer then brings what they have experienced to my work and we connect over the canvas. I have been able to share art with people from Australia to Trinidad and Tobago, Switzerland to New Zealand. This is incredibly cool to a humble mom artist who once wondered if all the effort she was putting into her art even mattered.

In 2011, I buried my 3-year-old son after a tragic accident. I remember just wishing so much that life could go back to “normal” — that somehow I could turn back the clock and erase what had just occurred. I wanted the unshattered version of my life back. But I realize that God didn’t want the “normal” version of myself, he needed me to learn about suffering the only way you can — by going through it. I became so thankful for my art as a means of processing all the difficult emotions. I had never imagined art would help save me, but painting by painting I explored all the feelings wrapped up in grief and learned to find joy again. Fitness also came into my life at this time and proved to be very cathartic. I went from running casually to participating in marathons. I also discovered a passion for rock climbing that eventually led to an application for American Ninja Warrior. I competed on seasons 11 and 13 in Tacoma, Wash. It was one of the scariest things I’ve ever chosen to do and definitely one of the coolest. I just submitted my application for season 14, so fingers crossed I’ll get another shot at the course.

“The Great Divorce” by C.S. Lewis. It’s a beautiful allegory of the afterlife.

“Old Love” by Joe Hertler & The Rainbow Seekers. It’s impossible to not smile while listening to this song.

“Suggested Donation” podcast by two artists: Tony Curanaj and Edward Minoff. They interview incredible artists of our time. I always learn so much.

My Banana Republic “flight suit.” It always makes me feel like Rosie the Riveter when I wear it.

I’ve lived in Utah County for nearly seven years, the longest I’ve ever lived anywhere. I love it. I’ve lived in Los Angeles and near Scottsdale, Ariz. — two large art hubs — but I haven’t found a more supportive art community than when I moved to Utah.

Howard and Shari Lyon are a superhuman artist couple, both running their own businesses. Shari creates art with melted wax, and Howard creates fantasy art for Magic the Gathering cards and paintings for The Church of Jesus Christ of Latter-day Saints. Shari has bright red hair and Howard often has bright red shoes to match.