Home Main Clarkes Make Their Marks: James and Andrea Clarke Live to Give 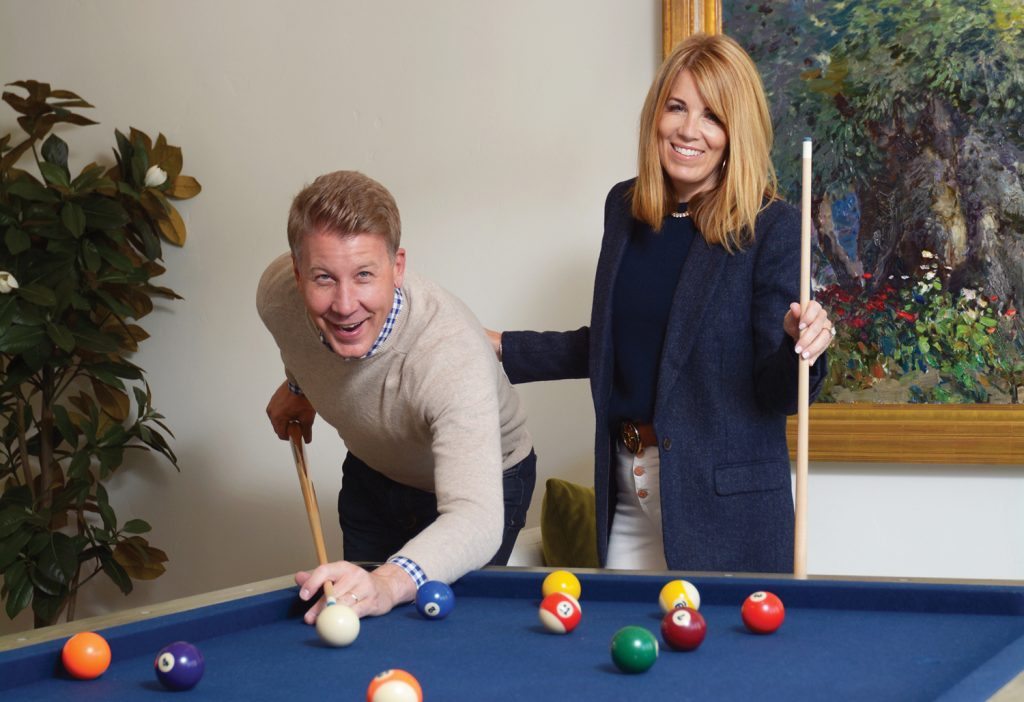 When James Clarke sold his company Clearlink in 2011, his pocket change was jingling. He and Andrea didn’t grow up with wealthy parents (although James did have a millionaire aunt — more on her later), so the Provo couple’s first big splurges were new territory.

For starters, James purchased a pair of Louis Vuitton shoes.

“I only wore them a couple of times and then I gave them to a friend visiting from the Dominican Republic,” James says. “I was too embarrassed to wear them. They didn’t feel like me.”

The second splurge was a six-figure check to the Ronald McDonald House after the Clarkes’ philanthropic friends reached out to see if they would be interested in donating.

“It was meaningful to have people mentor us in the art of giving,” Andrea says.

The Clarkes felt a connection to the Ronald McDonald house because James’ best friend from growing up in Idaho had triplets who fell in irrigation water as toddlers and needed intense medical care. The family benefited from the Ronald McDonald House while the children were recovering.

“I knew how important the Ronald McDonald House had been to my friend in his time of need. When we had the chance, it felt amazing to do the right thing and give back to the community,” James says. “It was the best kind of intoxication I can ever imagine. It felt like a dream, and it was beautiful. It lit a fire in us to work hard so we could give more.”

In a full circle moment, one of those triplets — now a healthy, vibrant young adult — started a position working with James at Clarke Capital Partners the same day as the Utah Valley Magazine photo shoot.

And therein lies a pattern for the Clarkes — full circle moments when financial gifts turn back around to bring additional joy and meaning to their full lives.

With Labor and Honor

The Clarkes wrote checks, both in their names and anonymously, for several years before officially becoming a 501(c)3 in 2020. Although it took several steps to complete the paperwork of becoming a nonprofit, the name of the foundation was a no-brainer: The Labor and Honor Foundation.

“When I was a young man, my father would write a check to me for the jobs I would complete, and if I simply finished the job the memo line would read ‘labor,’” James recalls. “But if I went above and beyond and completed the task with integrity and quality, the memo would read ‘labor and honor.’”

The Labor and Honor Foundation focuses on arts, education, alleviating poverty and helping the under-served.

James and Andrea — along with their children Savannah, Ryan and Jack — meet monthly to review the expenditures and opportunities of their family foundation. Natalie Okeson is the executive director of the Labor and Honor Foundation.

“Natalie is incredible, and she occupies the coveted corner office at Clarke Capital Partners,” James says. “That symbolizes how important we believe it is to be a good community partner. Helping others is why we continue to build businesses and to go to work every day.”

About eight years ago, Elder Craig Zwick of The Church of Jesus Christ of Latter-day Saints called James and asked if he could lend his professional services and support. Elder Zwick’s son is a special needs adult, and he spends his days at Central Utah Enterprises where he and his peers perform meaningful tasks for local companies, such as laundry services, putting stickers on packages, etc. CUE had always been under the umbrella of the Provo School District, but due to challenges and facility needs, the district was planning to shut down the program.

“I came on board to work out logistical issues and help everyone catch the vision of how to save the program,” James says. “It was our ‘save the clock tower’ moment, and we’re so pleased this tremendous facility is still operating. It feels like an angel convention every time we come here.”

With James’ help, CUE was spun out of the school district and gained its footings again with the support of the Labor and Honor Foundation.

Now the Clarke family hosts events at CUE throughout the year, such as Halloween parties, Christmas celebrations and pizza lunches. Jack, the teenage son of Andrea and James, completed his Eagle Project at CUE by planning and hosting a carnival for the special needs adults. Two buses full of Jack’s Timpview football team attended the carnival and had the time of their lives sharing championship T-shirts and making memories with their new friends.

CUE now has an additional sign on the outside of the building — The Labor and Honor Center.

“They have become like family,” James says. “We have won far more than we’ve ever given by being associated with these great people and friends.”

James is known for his positivity and his use of the word “sensational.” He is the first to greet VIPs in a room but also the newcomers and the entry-level faces around the table. He loves people, he loves causes, and he loves life. But there is a phrase he doesn’t care for.

“One of my least favorite statements is, ‘It’s not personal, it’s just business,’” James says. “There is no such thing. Everything is personal. And the most personal topic is our ability to help those who stand in need.”

Outside of his parents, James says the greatest influence in his life came from his father’s sister. Sybil Ferguson started Diet Center and grew it to one of the greatest franchises in the history of the United States. James lived nearby in the Rexburg area and was tutored by her leadership and philanthropy.

“She would call me — her nephew — to ask for my counsel on how to direct her funds,” James says. “I was in student council at Madison High School, and she would ask what our school needed such as lockers and sound systems. She wanted to help, and I took note of her generosity.”

James said his aunt also made him feel like a big deal and introduced him when U.S. senators or other dignitaries were in town.

“As a ‘have not’ amongst the ‘haves,’ I saw how she treated people and how she built others up with the resources she had been blessed with,” James says.

In the decade since the Clarkes moved from Salt Lake City to Provo, the Clarke name has been sprinkled throughout the county. For starters, there is the Clarke Grand Theater at SCERA in Orem — and “CB” stands for the Clarke Building on UVU’s campus. The latter has its genesis on the back of a bus in India.

“I was riding a bus with then-UVU President Matt Holland, and he asked if we would donate for what would become the Clarke Building,” James says. “I told him I would talk to Andrea and let him know. He encouraged me to donate and believed if I would step up, others would follow and support UVU in meaningful ways.”

After the bus ride, James did talk to Andrea. And they decided to step up and write a check.

“A couple hours later at dinner, I looked down the table and gave President Holland a thumbs up — we had a deal,” James says. “The president and first lady of UVU have had a tremendous impact on our philanthropic giving. That bus deal was instrumental in shaping how we would give in the future.”

James and Andrea continue to be involved at UVU under President Astrid Tuminez’s leadership. James serves as the Chair of the Board of Trustees, while Andrea has chaired the Women’s Success Center at UVU.

But it was the multi-milliondollar donation on a bus that truly cemented the relationship between the Clarke family and the state’s largest university.

“It was one of those moments when we decided giving was going to be the main focus of our funds,” Andrea says.

Although the Clarkes haven’t publicly stated how much they’ve donated the past decade, it’s clear they’ve spent more on others than themselves.

Remember the Louis Vuitton shoes that were given away before even getting scuffed? That’s Exhibit A.

Exhibit B is similar. James purchased a gray Ferrari early in his career.

“I rarely drive it,” he says. “I keep it in the garage as a physical reminder to not spend more resources on things like that. I get far more joy out of putting our money to use in the community.”

“I knew retirement wasn’t for me,” he says. “The whole reason I get out of bed every morning is to earn more resources so we can give more. It is what drives us as a family.”

Although the Clarke name is synonymous with philanthropy, they also shrug off the moniker because “others have done much, much more than we have done. In a lot of ways, I feel like we really haven’t done anything yet,” James says.

Fact check! The community has already benefited in a plethora of ways from the Clarkes, and the family is laying a stronger foundation to strengthen their … well, foundation.

Andrea graduates this month from Columbia University with a master’s degree in nonprofit management.

“When we sold Clearlink, James started talking about starting a foundation and I didn’t even know what that meant,” Andrea says. “But now we’re fully invested and moving forward so we can increase our impact.”

James applauds others in the community who are his fellow mentors and friends, such as Todd Pedersen and Davis Smith.

“So many in this community step up, but we want even more people to catch the vision of how amazing it feels to lift others along the way,” he says.

The Clarkes are leaving their marks.