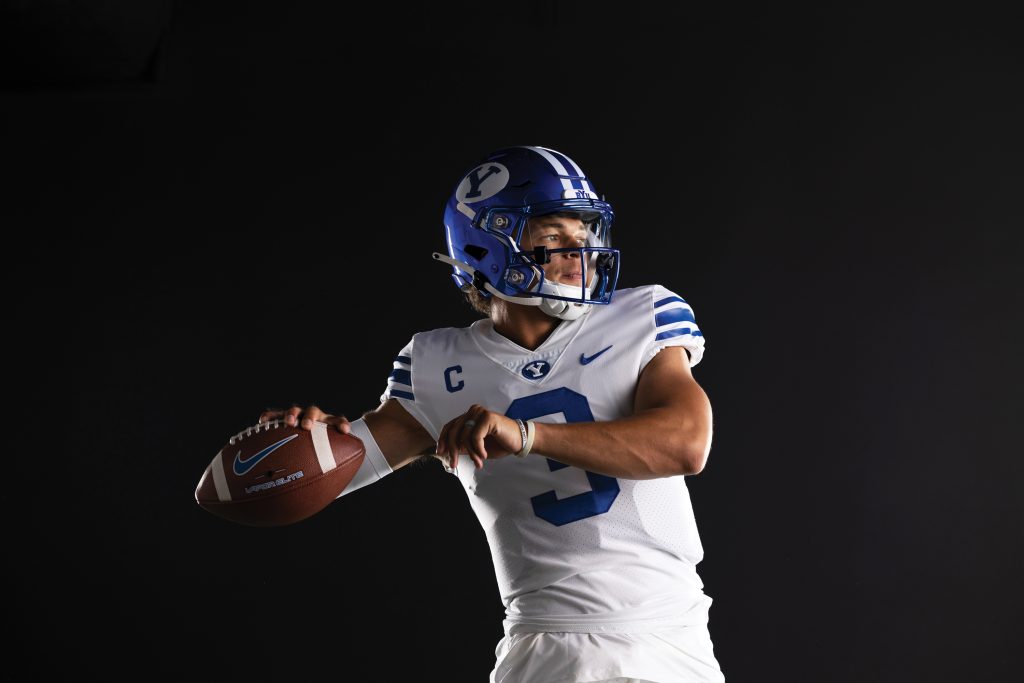 When you speak to most pundits — and even casual fans — the fate of the 2022 BYU football team will come down to the right arm (… and legs … and mind) of junior quarterback Jaren Hall. The second-year starting quarterback is considered an NFL draft prospect and is on a number of watch lists for the best quarterback in college football.

The Mapleton-native embraces the chance to lace up the cleats for his hometown team and the pressure of what it means to be QB1 at QBU.

After Zach Wilson left BYU for the New York Jets, Jaren Hall stepped in as BYU’s quarterback and played in and started 10 games last season, going 8-2 in his first full year as the starter. It’s a role he’s wanted to play since his childhood when he would hear stories from his dad, Kalin, a former Cougar who played for LaVell Edwards from 1992 to 1993.

“My dad played here, I grew up here coming to games, I heard about what he did and what BYU did for his life personally — I have always felt drawn to BYU,” Jaren says. “I have seen the difference this place made in my dad’s life and the lives of my family members. It’s a special place.”

That played a big part in him committing to the Cougars his junior year at Maple Mountain High School in Spanish Fork. However, this “sure thing” started looking a little red during his senior year.

“In a way, I was very much a legacy kid, but there was a minute there in my senior year where I was thinking of switching to Utah for a second,” Jaren says.

“I was recruited to Utah by coach A-Rod (current BYU offensive coordinator Aaron Roderick) and Kalani (Sitake),” he says. “I loved them and loved Utah. But, when Kalani returned to BYU, that reassured me that I wanted to be at BYU.”

His blue blood doesn’t just stop with his father. His mother, Hollie, graduated from Springville High and was a gymnast for BYU in 1993.

“She was a better athlete than Dad, to be honest,” Jaren laughs. “She was a hardcore gymnast, and she knows the work involved in competitive sports.”

Jaren has already had what would be considered a successful career in blue — 2,854 yards passing, 65 percent completion rate, 157.42 quarterback rating along with 358 yards rushing — but that’s not actually the legacy he’s looking to leave behind for his daughter, Jada.

“She is another major piece of motivation,” Jaren says. “Not only do I want her to grow up and be proud of what I did, but I’ve also realized that football can be a good way to provide for your family. Now, adding my wife (former UVU soccer player Breanna McCarter) and daughter to the picture, it’s just a great way to give them a wonderful life. I love the game and want to compete, but they are another reason I work hard everyday.”

Breanna and Jaren met through mutual friends from the BYU football team, and she was interested from the start.

“She saw me out and about in town and took a liking to me, I guess, and asked who I was,” Jaren says. “Long story short, I got her number and the rest is history.”

Breanna’s experience as a five-year Division I collegiate athlete has helped Jaren navigate his own rigorous schedule of workouts, practices, classes and family responsibilities.

“Bringing her into my life has helped me,” Jaren says. “She already understood the grind of being a college athlete. She understood what I needed to do. She’s my coach on the side. I definitely married up. She’s always been my biggest support and has helped me to concentrate on what I need to do to be successful on the football field.”

MAN ON A MISSION

Another factor in Jaren’s success and development as a quarterback was the mission he served for The Church of Jesus Christ of Latter-day Saints in Roseville, California. For him, a mission was always in the plan, regardless of where he might play football. Part of this was because of his own father’s conversion to the church as a young football player at what was then Dixie College (now Utah Tech University) in St. George.

“My dad was a convert, and I saw the things he dealt with not growing up in the church. He always felt it was important for us to serve — especially since he didn’t have the opportunity,” Jaren says. “As I grew to know for myself that it was the right thing to do, it was a great way for me to give back to the community and serve the Lord. I’m a faith-driven man and I knew if I would sacrifice some time for the Lord, it would be returned to me 10-fold — and it has. Not everything has been perfect, but it has benefited me a lot. Not just spiritually, but in sports, too.”

Jaren’s athletic excellence hasn’t been just on the gridiron. Before he was at the top of the depth chart, he was patrolling the outfield for the BYU baseball team.

“Growing up in the Mapleton and Spanish Fork area, sports are really big — especially baseball,” Jaren says. “Baseball was big at my high school and that’s where my baseball career really took off and I started to think of playing two sports in college.”

Maple Mountain High won the state baseball championship his junior year — after Jaren had already committed to play football at BYU — and that was when college baseball started to look like a possibility, too.

“I had a really, really good junior year and a good state tournament run,” Jaren says. “I had already committed to play football, but I started talking to the baseball coaches here at BYU about possibly playing some baseball. I kept it in the back of my mind and when I came home from my mission, I rekindled that relationship with the baseball coaches and went ahead and ran with it for a couple of years.”

His freshman year in 2019, he played in 27 games for the Cougars baseball team and scored eight runs, had six hits, a home run, five RBIs, eight walks and four stolen bases. He was hitting .400 in five games during the Covid-shortened 2020 season.

Ultimately, though, football was his priority and the toll on his time and his body from baseball was too much.

“When I realized the opportunity I had with football — plus football was paying for my school — it was a good choice for me (to stop playing baseball),” Jaren says. “Baseball take a lot of time in the spring and summer. I knew how hard I wanted to work at everything, so it wasn’t realistic to play two sports anymore.”

Plus, a hip injury that he suffered in the summer of 2020 came from baseball, which made him realize that his baseball days needed to take the bench.

His football days are certainly far from over, though. Since taking over the starting role from Zach Wilson at the beginning of the 2021 season, he has played in 10 games and thrown for 2,583 yards, 17 touchdowns and five interceptions. He was also the teams second-leading rusher with 307 yards and three touchdowns.

Oh, and he was the first BYU quarterback to beat Utah since another Hall (Max … no relation) did it in 2009.

That’s a legacy to build on.